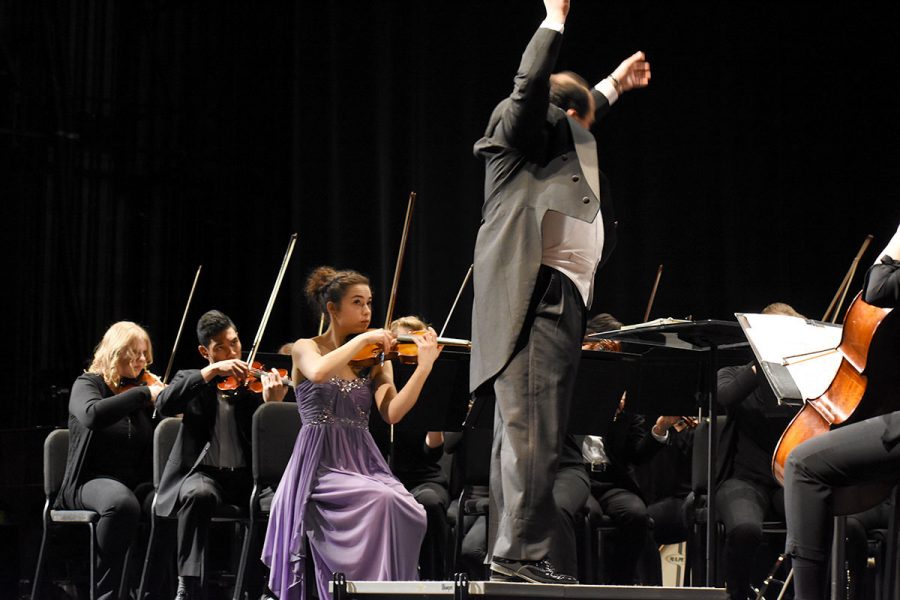 Gantner Concert Hall opened its doors at 2 p.m. Sunday for a performance by the UW-Eau Claire Symphony Orchestra. The ensemble accompanied the talent of twelve Concerto Competition winners.

The Student Concerto Winner’s Concert is held every other year and recognizes the winners of the university-wide competition which takes place the previous semester.

Head Conductor Nobuyoshi Yasuda, who said he has enjoyed conducting the orchestra for 27 years, helped start the competition and concert for Eau Claire’s undergraduate music students over 10 years ago.

“It’s not just fun, but it’s significant to really be able to hear and see the actual talent, it’s like, ‘Wow, we have this many talented students from each division,’” Yasuda said. “Sometimes a program like this is just for the sake of the program’s success. But I really try to offer opportunities for the individual students.”

Eau Claire does not offer a graduate music program, so the competition is a unique opportunity for undergraduate students to compete and perform at this concert as winners, Yasuda said.

Each musician and musical group was chosen as winner of their division based on several criteria.
The competition application form provided by the university states each entry must choose a work that also has a wind accompaniment typically no more than 10 minutes long.

Eau Claire faculty and area musicians judge the competition and may or may not choose a winner for each division. Divisions include percussion, wind, string, piano and composition.

“I really think that this inspires and motivates students to get better and it’s not just about winning,” Yasuda said.

Anne Schreiber graced the stage first on Sunday, opening the afternoon performance with a dramatic dialogue between her violin solo and the orchestra behind her.

Next up was student composer Tyler Lubke, who shared his original piece “Cascade” inspired by his experience of walking through a monarch butterfly migration years ago. His compositional journey began with the memory, which evolved into drawings.

He said his goal while writing the orchestral music was to turn those shapes into sounds.

One of two winning saxophone quartets, named Sarcoline Quartet, followed the full orchestra’s performance of Lubke’s composition. Yasuda said saxophone is not considered common in a symphony orchestra because it was not available to composers before approximately the 20th century, but it adds a jazzy addition to the full ensemble sound.

International student and Hong Kong native Yi Hsien Li powered through on the piano along with the orchestra next, performing a piece written in the early 1900s by Russian composer Sergei Prokofiev.

“We don’t have an actual conducting division (in the competition), but we wanted to feature somebody who is really talented in conducting,” Yasuda said.

To close the concert, the second saxophone group, The Moondance Quartet, performed a lively and bumbling two-movement piece.

Music composition student Levee Stadel has been playing the upright bass in the orchestra for six semesters. He said Sunday’s performance with the winners was successful.

“The competition winners had some fantastic performances. The audience clearly enjoyed each part of the show based on all of the hooting and hollering that accompanied the applause,” Stadel said. “It was a memorable experience getting to make music with everybody in the ensemble (on Sunday).”

“I appreciate some of the challenges that the repertoire brings and then feeling great when the orchestra plays a tough passage without too many hiccups,” Stadel said, “We challenge each other to become better musicians regularly which is something that I value greatly.”

Each semester the orchestra performs approximately four times, sometimes for theater performances and choir concerts. Other performances include waltz music for the Viennese Ball and separate concerts for the winter holiday as well as fall and spring.