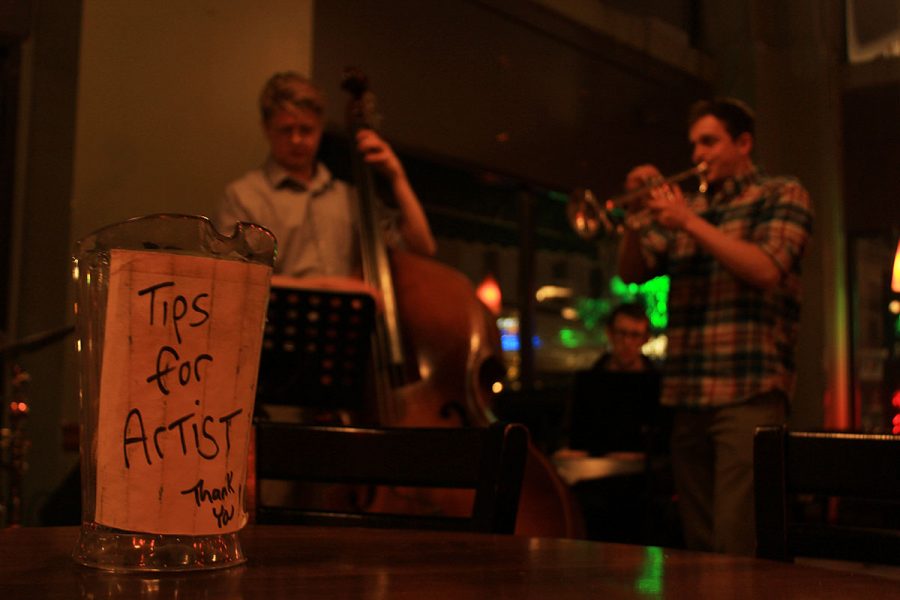 Community members and students came to Acoustic Cafe on Saturday night for various reasons, but decided to stay because of the jazz group that was performing.

As the snow came down and the cafe started to fill, The Cody Longreen Band set up its instruments and ran a sound check.

The Cody Longreen Band comprises ­— none other than Cody Longreen — and whoever else he chooses to play with at each specific event.

Longreen, the band member who leads the group and plays trumpet, is a junior music performance student at UW-Eau Claire.

The other three students that joined Cody Longreen on Saturday night were Hunter Delikowski, junior geography student; William Debreay, a second-year double bass performance student; Jan Hora, a junior music, business, and German student, along with the fourth member, Colin Heshmat who is a graduate from the University of Illinois, Urbana Champaign.

Longreen has been playing the trumpet since he was in fifth grade, and he started to really love jazz music in seventh grade, but said he has always had a passion for writing music and performing.

Longreen has played on many different occasions with numerous combinations of musicians, but he said he enjoyed Saturday night’s ensemble so much that he plans to record a CD later on in the semester with the four of them.

Delikowski depicts the group’s music as a spectrum of classic jazz standards. Their own music is influenced by standards in contemporary pieces.

“We learned standards first to create a foundation, and now we are able to write our own music and develop a contemporary style,” Delikowski said.

During the Saturday performance, audience members sipped their cafe mochas and listened to the talent of the young artists.

The set began with a song that DeBreay referred to as “a groove” — “Mr. Clean” immediately captured the audience’s attention. The band continued playing songs such as “Giant Steps” and “Lady Bird.” After 8 p.m. the band performed some of Longreen’s original music.

Madeline Bunde is a junior history student who was at the coffee shop with a friend Saturday and decided to stay and listen to the band.

“I wasn’t here originally for the band, but I know the university is well-known for their jazz, so I knew I wanted to stick around,” Bunde said. “And I wasn’t disappointed.”