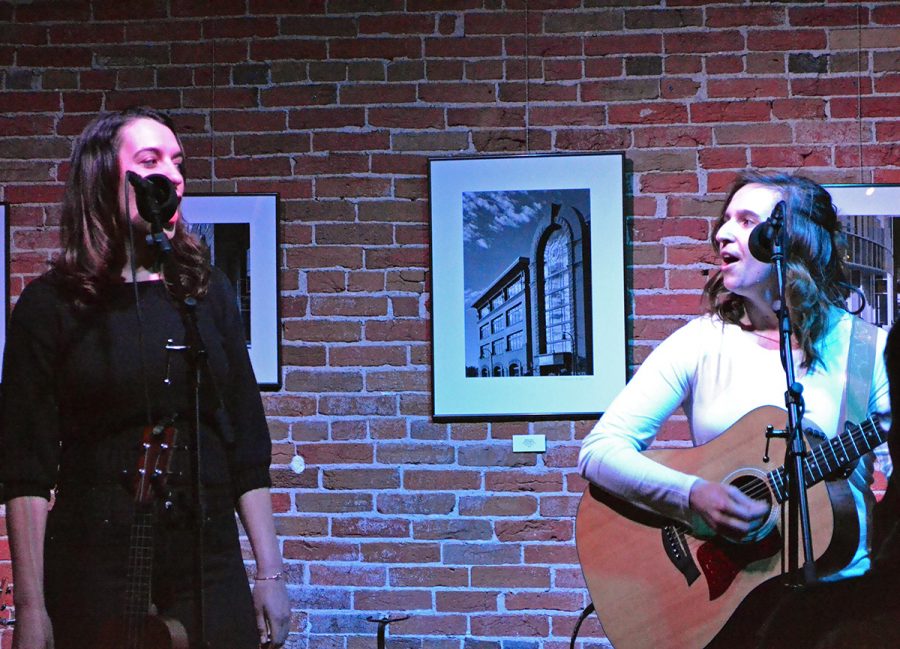 Cate Lucas (right) and Kelsey Nocek (left), performed with Sam Kienetz and Georgia Rae (not shown), at their band's album release at 7 p.m. on Friday night at The Local Store.

The store smelled of hot chocolate and a gingerbread cookie candle. Family members of the band crowded the store before the release to show their support, and the band members chatted openly about their nerves in anticipation of the live show.

The local band came together when they first met in college. Three of the band members­, Kelsey Nocek, Cate Lucas and Sam Kienetz attended UW-Stevens Point, and the fourth band member, Georgia Rae became acquainted with the band through a mutual friend.

In the band, Nocek and Lucas sing together to form beautiful harmonies, Rae plays the fiddle and Kienetz plays the drums.

The band described its music as folk-pop, although there was some debate between the four band members about the genre.

“I would say our music is folk-pop, but there’s an acoustic feel,” Nocek said. “Our music is chill melodies, but we gain that folk aspect because of the fiddle.”

Nocek said the band started performing together as a worship band for the Christian group Cru at Stevens Point and then decided to write songs and record an album together.

“Naked we come, naked we’ll go” was recorded at the Hive Studio with Brian Joseph and mastered at April Base by Zach Hanson.

Lucas said they titled the album based on the feeling of being naked when they sing, meaning they feel vulnerable sharing their music, and they pour real emotions into every lyric.

After the first song Lucas thanked everyone for coming but kept it short before she got too emotional. As the night went on, the band played a number of songs from the new album and some that didn’t make the cut, such as “Wardrobe,” “Foreign Land,” “Midnight in Paris” and “Dreamers.”

Lucas said there is a little bit for everyone in the eclectic songs that can be heard on their album. For her, storytelling and music go hand in hand.

“There’s an eclectic variety of songs on the album,” Lucas said. “There’s going to be some lullaby melodies with a tight harmony, some fun upbeat tunes and some songs you’re going to just want to sink into.”

Attendees crowded into the small room and spilled out into the rest of the store to hear the band perform.

Ceana Olsen, a second-year biology student, said she saw a poster on the bathroom wall in Racy D’lene’s Coffee Lounge and decided to come to the album release.

“I think they had a really unique sound,” Olsen said, “and I love when bands have fiddle because it creates a cool sound.”

As the event came to a close, the band invited the audience to enjoy fresh hot chocolate and one last song around the fire pit outside of the store.

Red Tide’s CD is being sold at The Local Store and can be streamed on Spotify.