Commemorating a past full of successful shows 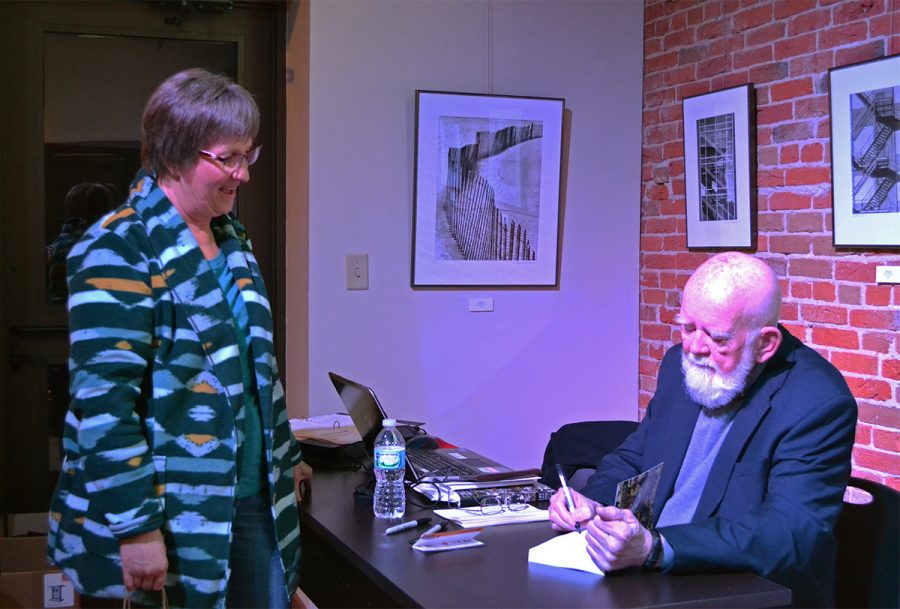 Promptly at 7 p.m. last Friday night at Volume One and The Local Store in downtown Eau Claire, UW-Eau Claire professor emeritus Wil Denson began the celebration of the publication of his new book alongside old coworkers, colleagues and friends.

“As you know, by God, if it’s a Denson show, it will start on time,” Wil Denson said.

Denson’s book, “Life Upon the Wicked Stage: Director’s Cut” acknowledges the years of hard work and dedication hundreds of people had put into show business with Denson, spanning over 126 productions, with over 300,000 viewers. Throughout these years, he had trained over 500 actors, crewmembers and other theater-related workers.

“I didn’t want those years to get lost,” Denson said.

Densen served as the Director of University Theater for five years, was the Artistic Director for 25 seasons of Summer Theatre, and directed 101 main-stage theatre productions at UW-Eau Claire, claiming impressive theatre background — a history that began in his childhood.

“I can remember directing shows on the back porch,” Denson said.

Some in the crowd at the gallery were coworkers from these past productions — old friends who seemed thrilled to see one another, hugging and catching up on old times. Among the audience members was Hugh Durning, who was one of the kids in Denson’s theatre productions.

“It’s a family,” Durning said with a smile on his face.

After many years of working hard in summer theatre, Denson’s friends encouraged him to write down his experiences with the summer theatre, through the ups and the downs. Denson’s book details the many hours of hard work many people put forth in order to produce the many musicals and plays that were considered greatly successful and set up many people involved for careers as actors, musicians, set constructors, costume designers or any theater-related positions.

According to an interview in Volume One, directing seemed easier to Denson when he first started in the late ‘60s than later in the ‘90s because audiences were bigger in the beginning of his career. In addition, he said it was difficult to find college-aged students who could act or work in the theatre during the summer months, without pay, and who were willing to give up the opportunity cost of not working a summer job.

Despite all the years of difficult late nights making sets, preparing lines and rehearsing, thinking through problems that arose and the dealing with the challenges of ending with a cohesive theater performance, Denson said he would repeat the experience.

“I’d do it all again in a heartbeat,” Denson said.