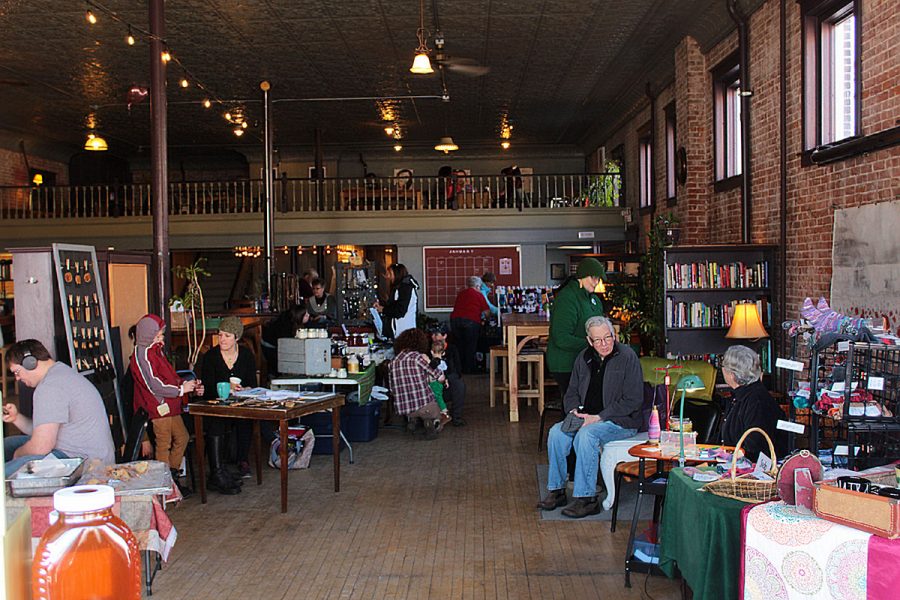 Since 2000, Menomonie’s Farmer’s Market has been growing with anywhere from 50-65 vendors setting up stands. With its increasing size comes increasing popularity among locals and out of towners. The area’s seasonal Winter Market is no exception to this growth.

This past Saturday, from 9 a.m. to 1 p.m., the Winter Market had 10 vendors and dozens of interested shoppers, most of whom seemed to be regulars by the way the vendors knew them by their name and their orders. The vendors each had their own tables filled to the brim with their select goods: bread, jam, handknit mittens, honey, pie filling and beyond.

Every Saturday from Nov. to April, the market is held at Raw Deal. Raw Deal is a raw food, freshly pressed juice and coffee shop in the town of Menomonie. The space is unique with brick walls, high ceilings, squeakwood floors and string lights running the length of the building.

The enthusiasm runs high in this market. The vendors chat with each other like old friends, while pausing to talk to customers about their products. It is a community within a community.

Rachael Furman-Falk, long time Menomonie Farmers Market vendor, said she is passionate about selling her no-spray, all natural canned goods to people in her community. Furman said she has a specific motive for attending the market each week.

“…Socialization,” Furman-Falk said. “Getting to talk to other people, other vendors and getting to know the community.”

In addition, Furman-Falk said she enjoys her “repeat customers who she knows by name.”

Vendor Dusti Larson of Chippewa Valley Produce LLC said she sells her canned goods at the winter market because it is a spin off of the summer market that she so openly enjoys, allowing vendors to continue sales in the off season. Larsons’ winter products are comprised of the vegetables from her garden from the previous harvest season. This differs from what she sells in the summer market, which is her fresh produce.

The winter market is not a market of left over goods, however; it takes time to process the items for sale and has to be planned over the entire year. This can often be more work than the summer and fall market, which entail fresh produce that can grow in one season.

As for the shoppers, not all show up to the market on purpose. Angel Stewart-Walters, a student at  the local UW- Stout, said came to Raw Deal for a school project and was “pleasantly surprised” when she walked into the market.

Although Stewart-Walters said she was just there on an unrelated school excursion, she said she was intrigued by the market.

“It has its own unique flare,” Stewart-Walters said.

She said she would definitely be back to the market, on purpose next time.