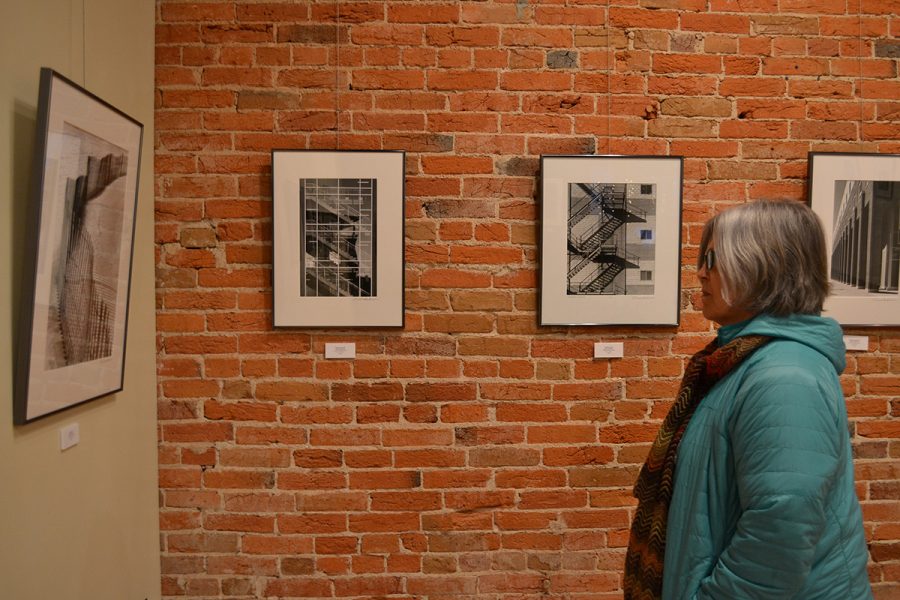 Volume One Gallery is always filled with different displays of local artist’s work. The current gallery of photos on display is sure to spark interest in the way you see common buildings every day.

“Edifices and Artifacts” is the name of Bruce Warrens’ photographic exploration that is currently on display at Volume One Gallery, inside the Local Store on the corner of North Dewey and Galloway Street. It features black and white photographs of local architecture and landmarks all captured on a film camera.

The photographs portrayed range from large structures, like the RCU building, to smaller pieces, like a gas tank.

Edifices came from the RCU building, which is pictured in one of Warren’s favorite photographs, he said. “Artifacts”, he said, “are anything that exists”.

Warren is a veteran in the field of photography as he has been involved for over 40 years.

“Inspiration can come whenever” Warren said. “Sometimes when I’m driving, I will stop just to take a photo of something that interests me. The play of light, shadows and different patterns are just things I find interesting.”

The passion for this line of work started a long time ago, he said. Warren said he first picked up the camera when he was nineteen-years-old, only to put it down for a short time while he was in school.

Warren said he is often times asked if he has a favorite piece on display. One he said in particular he liked is titled “Divergence”. This piece features a split in the railroad and happened to be one of the pictures that was taken with perfect timing he said.

Warrens’ work differs from others not only visually, but also in his process.

“I take the picture, develop it, and print it,” Warren said. “I process everything myself.”

Grace Deck, an employee at the Local Store, said many people are coming in just to see the art and take in what the gallery has to show. Deck said this allows people to have more appreciation for photography.

“You need to have a certain eye to produce pictures like this,” Deck said. “The photos are really artistic; they show really interesting parts of town that you don’t think of as artistic.”

The gallery gives artists a way to represent themselves and show what they are doing, she said. They do this by only taking art from the surrounding Eau Claire area.

Warren has gathered an audience since starting photography full-time in 2000, but the Local Store functions as another place to showcase his work. It is all “pure photography,” Warren said.

“No pixels were harmed in the making,” he said.

Warrens’ photographs will be on display at Volume One Gallery until Feb. 24, everyday beginning at 9 a.m.