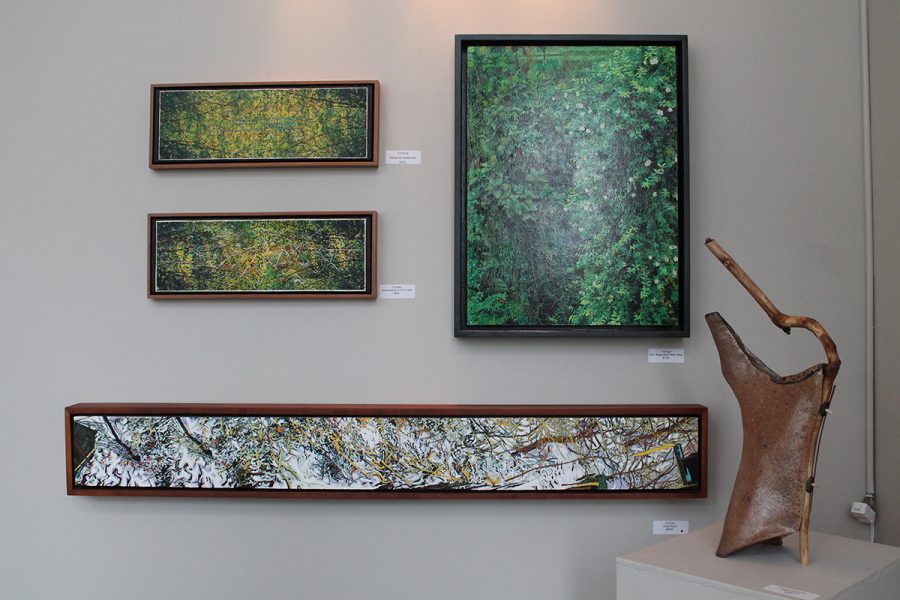 Opening and running an art gallery is no small ordeal for two artists in the Chippewa Valley. A new show opens nearly every six weeks at the small flat, making the organization go through planning and arranging, not to mention the duty of maintaining an art market.

200 Main is an art gallery located in Eau Claire’s downtown, about three blocks away from Haymarket Landing. Situated perpendicular to Barstow Street, the small art gallery takes up the corner closest to Graham Avenue.

Inside, the gallery’s current exhibit features art of various mediums, including sculptures, pottery, functional art and paintings from three artists — one local, one from Door County and the other from Minneapolis.

Tiit Raid, an Eau Claire native, completes paintings; Door County’s George Ouimette does sculpting and pottery work; whereas Keith Wyman creates functional art such as benches and tables and calls Minneapolis home. Their art is available to purchase, however Burke said art galleries are not just meant for buying art.

“We think it is really a chance to just kind of enjoy the talents and the beauty of the artists around us,” Burke said. “So we try to take away that stigma of not being able to go to a gallery and not feeling that you can even come in.”

In that sense, Burke said the gallery does not make a significant profit, but does “raise the bar of art and beautiful things in Eau Claire.”

When the gallery sells artwork, around 65 percent of the profits go back to the artist and the remaining 35 percent go toward the gallery.

“I think we feel the loyalty to the momentum that was started and that has continued in downtown Eau Claire,” Burke said. “There’s so much vitality, and there’s a nice cross-section of young and old and businesses that are starting, businesses that have been established. We were really excited to be a part of it.”

Now that they’ve been open for approximately a year, Balow and Burke have asked artists to showcase their work and have received more requests from artists to show art in the gallery. They started off by asking artists they know, others they admire and they make sure a wide variety of artwork comes through.

Each time they change artists, opening receptions take place at which the artists come and talk about their work with the public and have a chance to meet them. Balow said the receptions have been successful, having much of the gallery space taken up by community members.

“I don’t think we’ve ever had a negative experience in here,” Balow said. “We haven’t had anybody since we turned it into the gallery say anything to us about prices, about anything.”

Between Balow and Burke, they said their relationship has always been great for running the gallery. Having met at Banbury Place, they bonded over art and decided to collaborate on running 200 Main because it is more integrated in downtown Eau Claire and less isolated than Banbury.

There, as art educators and makers, they felt it was time to dedicate their energy to their own art and show the work of others.

“Art is the soul of a community,” Burke said. “It’s the essence of a culture.”