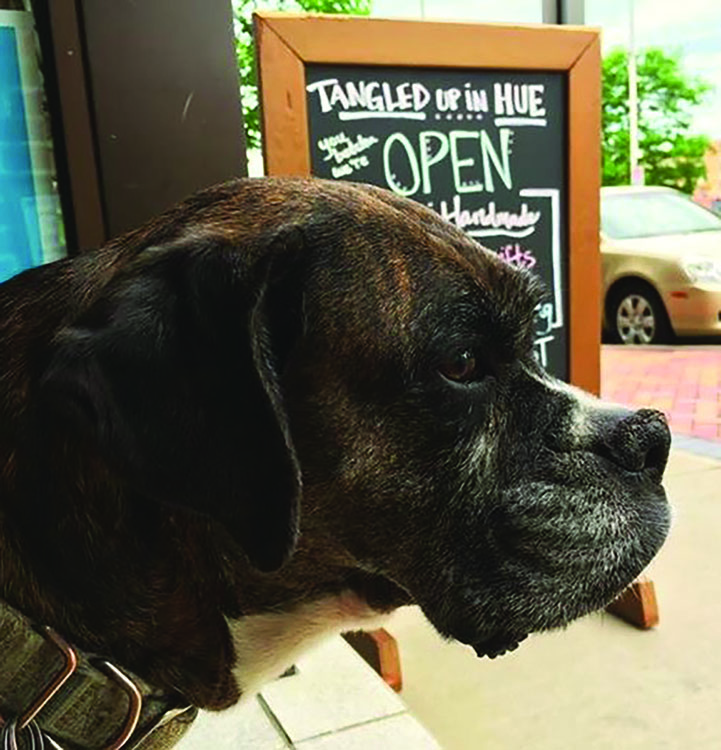 Tangled Up In Hue’s shop dog will be retiring after nine years of greeting customers at the door.

Tangled Up In Hue’s shop dog, Emma, has been around the block — and not just on a nice, leisurely walk. After nine years of welcoming customers to the artsy store on Barstow Street, the boxer is retiring.

Emma has a progressive disease known as degenerative myelopathy (DM), which affects the spinal cord in some breeds of dogs, leading to whole-body paralysis, starting in the back legs. Because of this disease, it is no longer safe to have familiar-faced boxer around the store, said Sarah Hammes-Murray, Tangled Up In Hue’s creative director.

“Emma lays down … and then she’ll see a person and she just wants to go up and love this person … her legs kind of slide out from underneath her and her butt drops — it looks painful,” Hammes-Murray said. “But she just loves people so much, and that’s part of of the reason we have to retire her from shop dog. With the tile floors, she just can’t get around.”

To celebrate Emma’s retirement and to donate to an animal-friendly cause, the store is putting on its fifth annual Dog Art Show, with all proceeds going to the Eau Claire County Humane Association (ECCHA). The association will also bring in an adoptable dog to the show’s opening this Friday, Oct. 6, to teach people about the adoption process and show the community the face of one canine waiting for its forever home.

Hammes-Murray said the show’s proceeds have been donated elsewhere in the past, from ECCHA to Bob’s House for Dogs to Ruff Start Rescue. Every year, she said, the cause is one that supports animals.

“We’re not just trying to support dogs,” Hammes-Murray said. “The title is ‘Dog Art Show,’ but obviously the Humane Association benefits all animals. We just find organizations in the area, locally, that do great things for animals. ”

All the art in the show, which runs the month of October, is priced under $200, so as to be affordable, thus more likely to sell, Hammes-Murray said. As per usual, it all must center around a dog theme — this is the only requirement of the artists, who submit and donate their work to the show, all giving at least 50 percent of their art’s selling price back to ECCHA and some donating 100 percent.

Murray said if there’s a medium of art, the show probably features it. Small sculptures, paintings, prints, photographs, handmade collars and other art forms line a table against a wall in the front of the store.

Those who don’t necessarily want to buy art can make a direct monetary donation, enter in a basket raffle or through buying a T-shirt, Hammes-Murray said.

This year’s new additions include another caricature artist, Jason Anhorn, as last year there was only one, Steve Bateman, who ran out of time. Hammes-Murray said besides that, the team at the store is just excited to see how the show’s opening operates in Tangled Up In Hue’s new, bigger location, as that will allow them to see what they have room to add in the future.

The show’s conception started with the death of a dog named Calvin. One of the artists who has work in the show every year came up with the Dog Art Show as a way to honor this dog, the first he ever thought of as really being “his.”

Brian Duerkop, Calvin’s owner and the man behind the idea, said he is friends with Erin Klaus, one of the store’s owners, so he collaborated with Tangled Up In Hue and the two worked to see the dream come to fruition. In the first year, all the work was created and supplied by The Art Cartel, an Eau Claire artist collective Duerkop started.

Now, he is making stained glass paw prints to display and sell, and artists in the show come from all around the nation.

Duerkop said the show continually brings back the people of Eau Claire because it’s a dog community.

“This town, I’ve noticed, loves two things —one is biking and one is dogs,” Duerkop said. “I see people walking dogs around here all the time.”

While some of the art appears to be breed-specific, with paintings of singular dogs, Duerkop said the pieces can still resonate with people who don’t necessarily own that breed.

“The expression of the animal — is it laughing, is its mouth open? A person might not own that specific dog, but they love the reaction of that dog …” Duerkop said. “They feel that feeling … They can say, ‘I’ve seen a dog like that.’”

Tangled Up In Hue’s fifth annual Dog Art Show will kick off with a reception at 6 p.m. on Friday, Oct. 6 at the store’s new location on Barstow Street. Attendees are welcome to bring their dogs as long as they’re friendly. For more information, readers can visit the store’s events page.