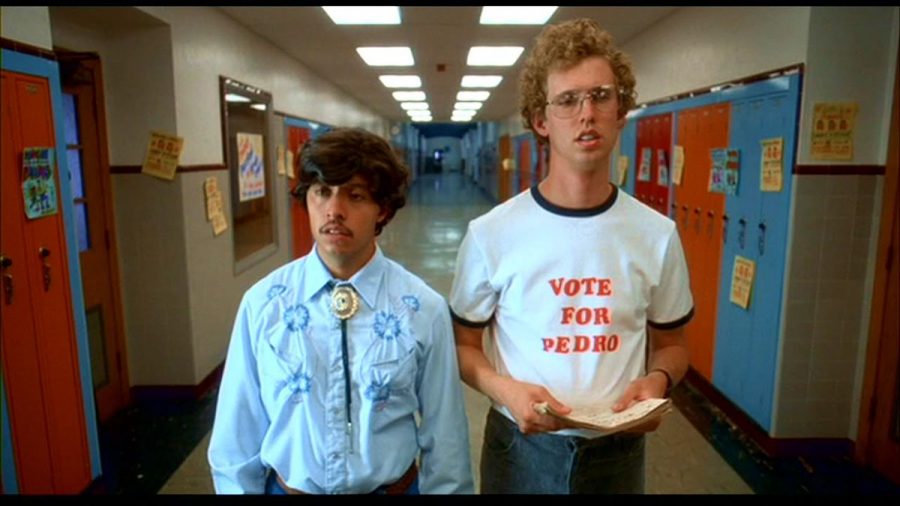 In the classic comedy, “Napoleon Dynamite,” Jon Heder stars as a socially awkward 16-year-old trying to navigate the ups and downs of high school while balancing a hectic home life.

It’s a film for the ages.

In Jared Hess’ 2004 hit comedy, “Napoleon Dynamite,” 16-year-old Napoleon (Jon Heder) lives a quiet, quirky life in Preston, Idaho alongside his beloved grandmother (Sandy Martin) and 32-year-old, unemployed older brother, Kip (Aaron Ruell). Although Napoleon is pegged as a social outcast among his peers, facing torment from school bullies and often keeping to himself to daydream or draw crazy creatures within the depths of his notebook, the status quo is about to change.

After Napoleon’s grandmother suffers a broken tailbone from a serious biking accident, she calls in the notorious Uncle Rico (Jon Gries) to look after the boys while she is healing at the hospital. Kip and Rico quickly turn on Napoleon, working together to constantly make fun of him and mock his socially awkward tendencies.

Meanwhile, however, things begin to look up for Napoleon, as he forms close friendships at school with classmates Deb (Tina Majorino), a quiet yet intelligent business owner, and Pedro (Efren Ramirez), a transfer student from Mexico looking to become the next class president.

Rico and Kip begin spending their time in a joint door-to-door business venture, each hoping to raise enough money to salvage relationships with their lovers. Rico has dreams to win back the heart of his beloved ex-girlfriend, while Kip needs the funds to visit his internet girlfriend, LaFawnDuh (Shondrella Avery) in Michigan.

On the other hand, Napoleon, Deb and Pedro are working hard on the class president campaign, using multiple tactics to take down the opposing front-runner, snobby Summer Wheatley (Haylie Duff).

Between the business shenanigans of his relatives back home and drama of the school election, Napoleon’s world has been flipped upside down. As the film comes to a close, he must decide how to maintain his new friendships, steer clear of his family’s scandalous schemes and secure victory for Pedro in the upcoming election.

The film is a classic satire, crafting the most hilarious and awkward moments of high school and combining them into a comical sequence. Each actor or actress takes their role to a whole new level, accurately embodying their associated stereotype, whether it be the social outcast or the popular, pretty girl.

Although the movie is set in the early 2000s, the retro vibe given off by the characters’ style and accessory choices (Napoleon’s giant glasses and Walkman, Deb’s signature side ponytail and puffy-sleeved dress, etc.), as well as the dated soundtrack help the film stand out from other ventures with similar plots or themes.

Heder’s performance is unparalleled. His portrayal of Napoleon is unlike any awkward, high school teen I have ever encountered. Heder does an excellent job at making sure Napoleon comes off as unapologetically himself, unafraid to be the goofy, gawky protagonist we all know and love.

With an impressive 71 percent rating on Rotten Tomatoes and humor that has remained relevant for over a decade since its debut release in the form of “Vote for Pedro” merchandise and coined expressions such as “Heck yes” and “Tina, you fat lard,” this film is living proof that some performances simply never grow old.