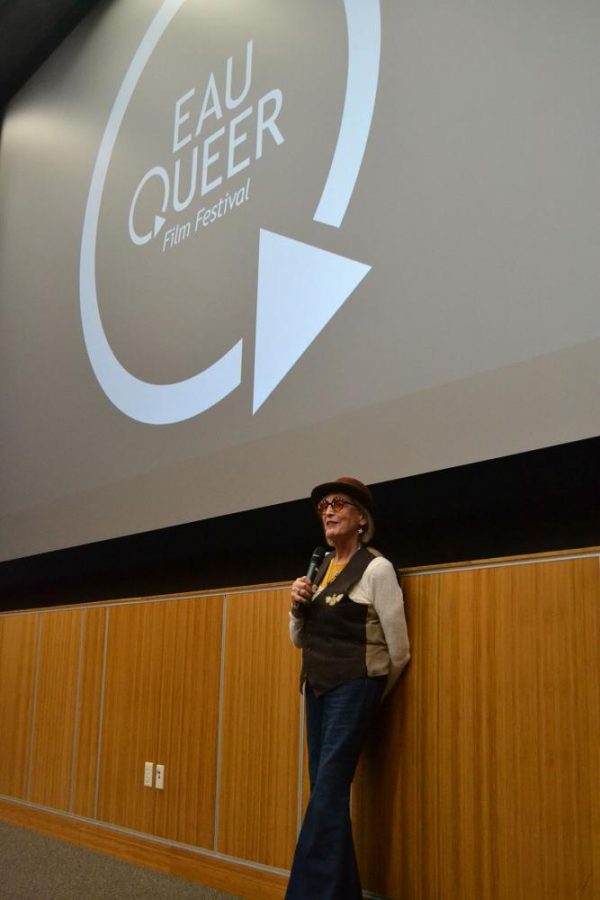 There was a lingering trail of popcorn kernels that led into a full Woodland Theater in the Davies Center on Tuesday evening, the opening night of the Eau Queer Film Festival.

The festival serves to “embrace difference, promote equality, encourage activism and challenge and educate through the powerful medium of film,” according to its website.

Ellen Mahaffy, one of the executive directors and creators of Eau Queer, said the campus was in need of LGBTQIA+ and people of color (POC) representation.

“Our hope was to create an event where we can create a community,” Mahaffy said.

Mahaffy created Eau Queer along with Executive Director, sociology department chair and professor and interim chair for the department of philosophy and religious studies Pam Forman. Although Mahaffy and Forman started is all, the festival is student-led.

Students screened the films at Frameline, an LGBTQIA+ film festival held in San Francisco in the summertime and are in charge of everything from negotiating fees with distributors to building a public relations platform.

Mahaffy said this year’s theme “Activate” was inspired by their goal to motivate and transform ideas into action.

Festival-goers munched on popcorn, cotton candy and sweets before settling into the first film of the week: “Saturday Church.”

“Saturday Church” is directed by Damon Cardasis and stars Luka Kain (Ulysses). Ulysses is an adolescent coming of age in New York City. The film introduces the intersections of gender, sexual and racial identities represented in today’s LGBTQIA+ community.

Ulysses struggles with gender and sexual identity throughout the movie. He faces grief, loneliness and rejection. Ulysses ultimately blossoms into full character with the help of older LGBTQIA+ friends he meets at a place for LGBTQIA+ called “Saturday Church.”

Cardasis weaves the coming-of-age story with elements such as melodic texture and bold colors. Often actors replace dialogue by displaying the scene’s emotions through song and dance.

Bornstein said there is a real Saturday Church that stands in Greenwich Village, New York City. It provides a place for LGBTQIA+ folks to eat, shower, dance, find clothing and make friendships, she said. The film features some real members of Saturday Church.

“Thanks for coming to this,” Bornstein said. “It was such an act of love.”

“I think (Eau Queer) is really important because it makes you feel more welcome,” Anderson said. “You belong because there’s other people like you.”

Charlotte Shanahan, a first-year student who is still discovering what she wants to study at Eau Claire, also found a place to call her own at Eau Queer.

Shanahan also pointed out the lack of fair representation LGBTQIA+ people receive in the mainstream media, highlighting yet another important aspect of the film festival.

“I’ve never seen any movies about queer people or about our community,” Shanahan said. “It’s nice to experience that.”

Eau Queer will continue to bring featured and documentary films together that portray the intersecting issues related to topics like gender identity, racial identity, differing abilities, sexuality and nationality.

The Eau Queer Film Festival will be screening films through Saturday. Movies are shown at the Woodland Theater in the Davies Student Center. Admission is free for everyone.

“Powerful film has the capability to get people to care,” Mahaffy said. “Through film, hopefully we create action.”