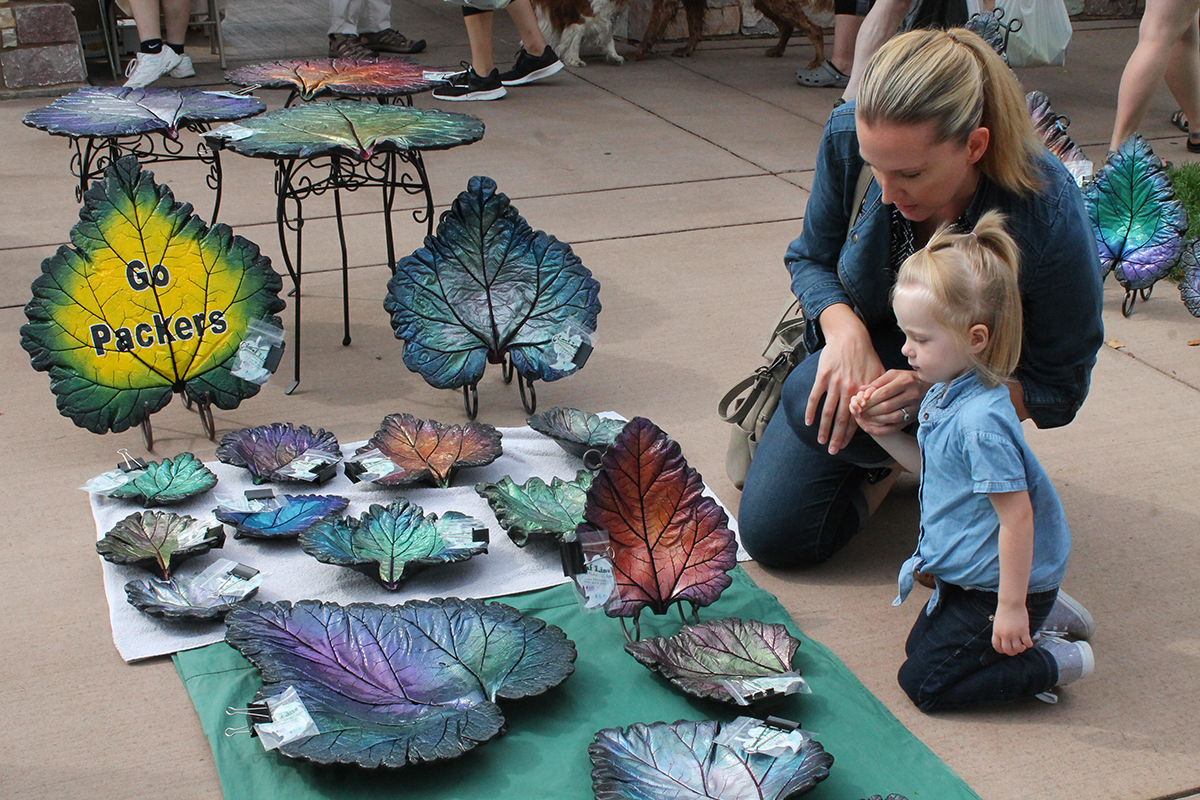 Mother and daughter glance over the art displays at the Eau Claire Farmers Market.

Early Saturday mornings in downtown Phoenix Park are when farmers gather to share their harvests with the Chippewa Valley. Crowds pack under the red pavilion to partake in the diversity of vegetables, fruit, homemade baked goods, locally raised beef and the fall pumpkins and apples from local orchards.

These are all great reasons to come to a farmers market, but there is another side to the Eau Claire Downtown Farmers Market not all community markets have.

Eau Claire area artists pitched their tents and assembled their tables of crafts, trinkets and other homemade novelties for the final time this year last Saturday. The Artist Market was started by downtown art collective Tangled Up In Hue, five years ago.

Most of the artists said they had been at the Artist Market for years and have had a great time and enjoyed every second of it.

Jenna Krosch of Eau Claire, who owns Dayside Daydreams, combined her love of travel, maps and crafts to make her dream into a reality. This is her first year at the Artist Market and she said she returned five times over the summer. She said she had overwhelming success and plans on returning next year.

“I feel like I’ve done well,” Krosch said. “It’s awesome to meet customers and hear their stories on why they are buying something.”

Denise Anderson of Eau Claire runs a travel and tote business called Carly’s Choice. Her inspiration began with her daughter, Carly, who was sitting in German class in high school and wanted to travel to Germany.

Her mom gave her the option of getting a part-time job or creating travel purses and totes and selling them locally. Since the beginning of the Artist Market, Denise has been at the market selling purses for her daughter.

“I told her we could make these and sell them and fund them for her trip,” Anderson said. “I heard Tangled Up In Hue was starting an Artist Market, so that was five years ago when we started.”

Donald Imm of Eau Claire is another art enthusiast who had a booth weekly along with his sons. Pen Shop Boys sold wooden pens and learned the skill at a carving convention.

The pen tent has been at the Artist Market for four years and has continued to expand its business to jewelry and electricity-carved wooden boards, Imm said.

“It is a diverse market,” Imm said. “There is people here that sell soap, sell glass boards and marbles, people who make handbags, drums, wall hangers and a lot more.”

The diversity of items to buy offers potential customers the option to get items they couldn’t get at a typical store. Kyle Northagen and Kayla Sauve, both juniors at UW-Eau Claire, said they tried to come every week and enjoyed the Farmers and Artist Markets.

“We really enjoy the variety of everything and walking around,” Northagen and Sauve said. “It’s unique to Eau Claire; they don’t have this in every city.”