A look into the life of a local beekeeper 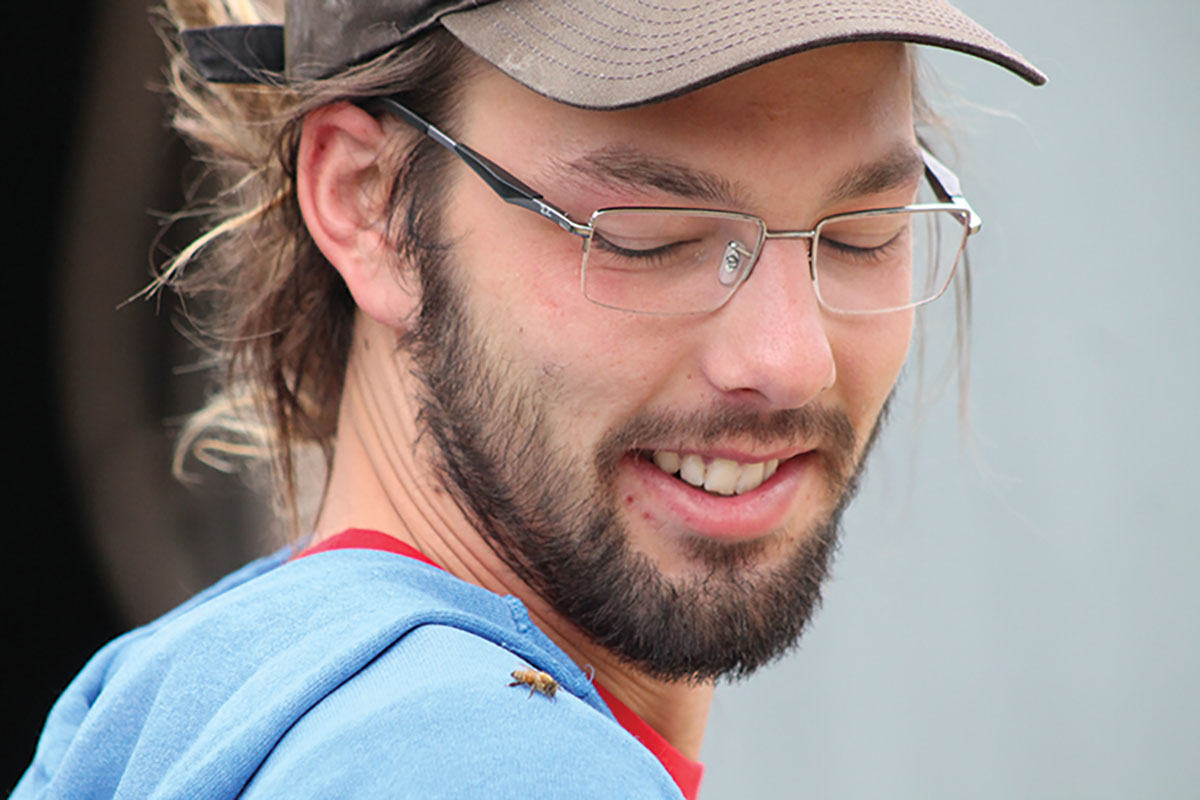 Kristof White smiles down on one of the thousands of bees he cares for on his bee farm in Augusta, Wisconsin.

A drive to Augusta, Wisconsin will take its passengers through rolling hills and fields of various shades of green and gold and over bumpy country roads in need of repair.

The sun peers down through fluffy, white-gray clouds and the chirpy chatter of birds nesting in the surrounding pines and oaks carries quite a distance in the open air.

After half an hour and only two turns total, the car pulls into the driveway of a farm, complete with a barn, a couple sheds and a white house surrounded by flowers and vegetable plants.

All is quiet, other than the birds and the protective bark of a dog curious about its new visitors. As you approach one of the buildings and tune your ears more closely, there’s something else: the constant, collective hum of thousands of bees buzzing in a nearby hive.

The hive is just one of 100 at Kristof White’s bee farm, where he cares for countless bees and collects their honey to sell locally.

Bees are nothing new for White, as his grandfather, who he said has 70 years of experience, taught him about bees. Now these lessons are serving their purpose because White recently took over operations at the farm.

Part of this art, he said, is waiting. It’s important to give the bees time and space to roam freely and without constant supervision. Bees can sense fear and anxiety, so he tries not to worry too much about them, lest they sting in response, White said.

White checks his bees approximately once every three weeks during the summer to remove frames for honey, which must undergo an extraction and filtration process that itself takes about two weeks.

Because this job doesn’t consume the entirety of every day for White, he also gardens, rides bikes, does maintenance on his home and spends time with his wife, he said.

When it’s not honey season in Wisconsin — White said this typically ranges from April-October — he travels and finds work on commercial bee farms around the nation as a freelancer. These operations are larger than his own; he said one farm he worked for had 1700 hives.

This freelance work has taken him to states like California, Florida and North Dakota with a man named Elijah Klumb, who White said practically lives on the farm and has been helping out with beekeeping responsibilities for four years.

These regions provide a wider diversity of plants and flowers than in the Midwest, which gives the bees more pollen to make honey. What bees eat affects the color and flavor of the honey they produce.

“They’re constantly concentrating the landscape into a box,” Klumb said.

When winter hits Wisconsin, as it inevitably does, the bees stop making honey completely. Instead, White said they focus on staying alive, vibrating to keep the hive warm. To feed them, White places hardened clumps of sugar inside the hive, but they also eat honey they store in preparation for the season.

Beekeeping is something White said he sees himself doing for as long as he can, and that is in part because of  the relationship he and his bees share.

“They’ve been good to me, and I like to say I’m good to my bees. I hate to see bees die, so I don’t like doing anything to harm them or potentially harm them.”

White, who sells under the brand name Bee Alchemy, said most of the honey produced on his farm sells at Just Local Food Cooperative in Eau Claire, but it is also available at a few other stores in the region.

In the future, White said he hopes to get into permaculture and grow crops that are more beneficial to the bees, like alfalfa, herbs and flowers.