‘Music is the soul of culture, music is the way culture expresses itself’ 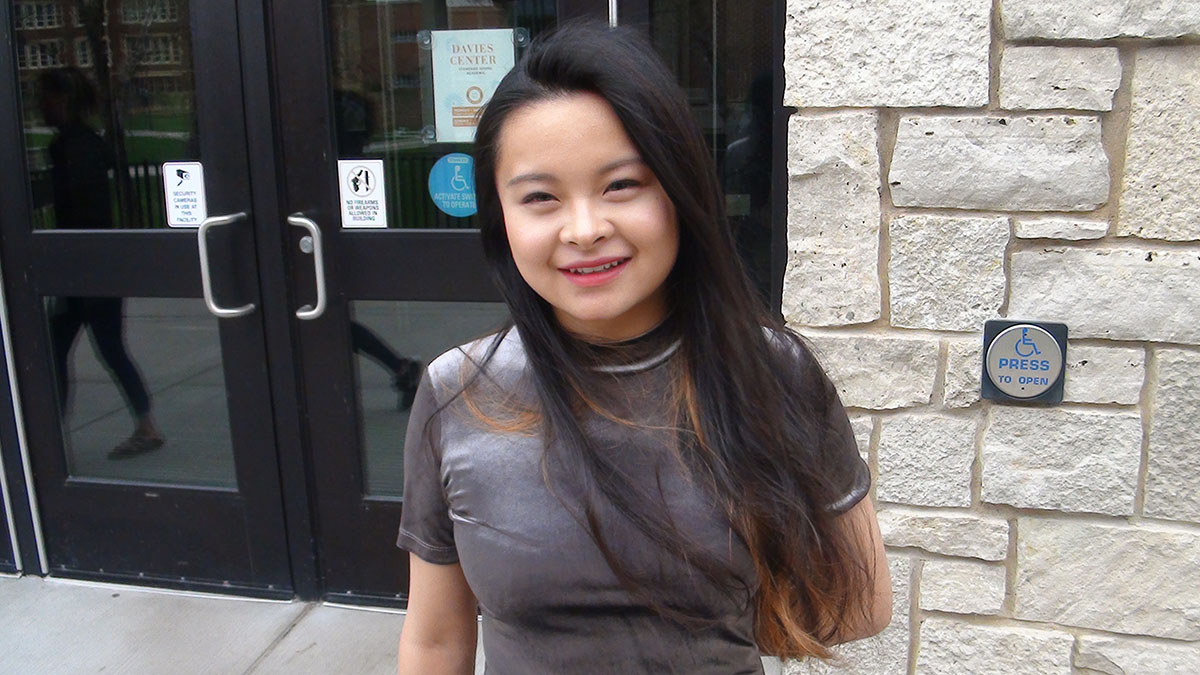 President of the Chinese Culture Club and international student, Zhenyu Zhou, has attended UW-Eau Claire for three years. She originally came from the metropolitan city of Kunming in South China and views the International Folk Fair as an opportunity for students to represent their cultures in a truthful and engaging manner.

While exotic, belly dancing probably isn’t the first thing that comes to mind when one tries to imagine the colorful and diverse world we live in. For Eddie Sanchez, it serves as the perfect microcosm of the International Folk Fair, an event that graced the UW-Eau Claire campus from noon to 4 p.m. Sunday.

A 2015 international politics graduate currently living and working out of the Twin Cities, Sanchez returned to campus and joined over 2,000 other attendees within the Davies Center. The theme of this folk fair was music, and Sanchez, part of a group called Peanut Butter and Gypsy, performed alongside group members in a choreographed tribal fusion dance.

Sanchez said belly dancing traces its roots back to the Middle East, but the art form today, especially the genre of tribal fusion, contains worldwide appeal and draws upon various influences around the globe.

“It incorporates different cultures into this belly dancing style,” Sanchez explained, still decked out in the tribal pageantry of the dance as he shivered in Sunday’s chilly conditions. “When you see us dance, you really can’t pinpoint what country it’s from because it’s from every country around the world being represented in the United States.”

Over two dozen groups filled the rooms and halls of the Davies Center, an array of cultures and subcultures ranging from Germany to the Peace Corps, the Chinese Culture Club to the Bahai’s of Eau Claire and the Le Salon of France to the Eau Claire College Feminists.

In one room, visitors were offered a hands-on tutorial on the proper arrangements of the hijab, sponsored by the Altoona Masjid. A quick stroll down the hall offered French cuisine, depictions of Czech art or memorabilia from the Chippewa Valley Museum — yet through it all was music.

Many of the exhibits featured music representative of their cultures. Performances such as Irish fiddling, the Nyckelharpas instrument and traditional Karen dancing took place in the Cabin off and on throughout the day. Grander ensembles, such as Two to Tango and Dan Newton’s Cafe Accordion Orchestra, staked their claim to the food court.

For Sanchez, the multitude of musical performances proved to be a highlight of the event. While he always enjoyed the International Folk Fair as a student, he said the performances are the reason he keeps coming back years after he’s graduated.

“It makes it interesting,” Sanchez said. “You get to see all the different style of music and how they incorporate it into their culture. Music is the soul of every culture. Music is the way culture expresses itself and it’s how people can relate to each other. It’s the universal language.”

Zhenyu Zhou, an international student and the president of the Chinese Culture Club, echoed Sanchez’s sentiment. She said the International Folk Fair serves a stage for foreign and minority cultures to represent themselves to the larger Eau Claire community.

Rather than merely hearing about another way of life, the fair allows people to meet their neighbors in a real and meaningful way, Zhou said. It couldn’t be contained by the walls of the Davies Center; music transcends boundaries and connects people across gaps of language or culture or appearance.

Shu Cheng, a coordinator for the event, said this year’s iteration of the International Folk Fair was an exhausting whirl of activity for the organizers behind it, but, ultimately, it proved a successful event for scores of people from every age and walk of life in the Chippewa Valley.

“It’s good family time,” Cheng said. “For the students, they can chill out and take the afternoon off from studying to enjoy some music and food from around the world. We can get to meet our neighbors who are in our community who we haven’t met before.”

Just as this year’s theme was music, Cheng said next year’s event is planned to be centered around food, another aspect people share a deep appreciation for, irrespective of culture.