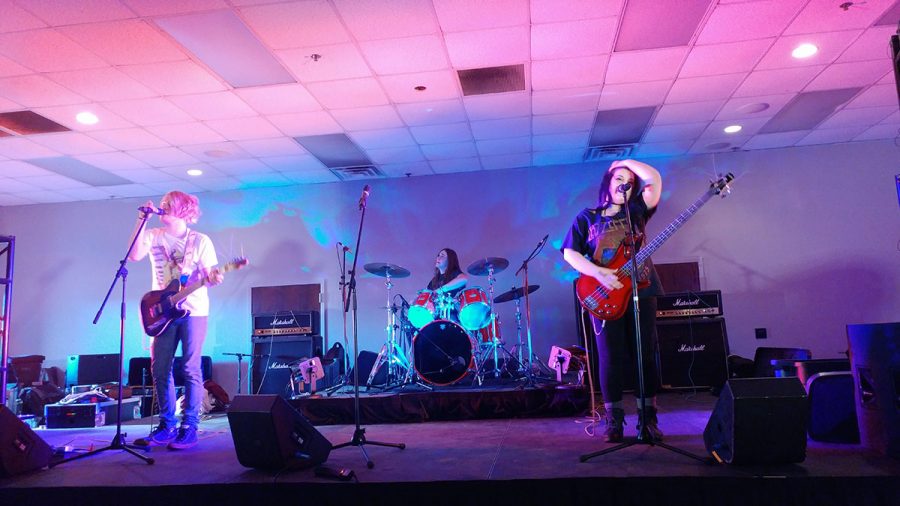 Filthy Sweet, a local Chippewa Falls rock band, opened for ‘Night for the Fight’ an event hosted by the Metropolis Resort in Eau Claire. The evening consisted of a variety of bands performing to help raise money for the battle against cancer.

In the room lit by multicolored lights, with two stages and a bar stood a crowd of Eau Claire community members chattering and swaying to the beat. Rarely was there a moment without music playing.

“Night for the Fight,” held at the Metropolis Resort in Eau Claire, hosted a variety of local and nationally known bands to raise money for cancer research.

The event, which was organized by Country Fest, Rock Fest and other sponsors featured mostly rock and country bands that had been touched by cancer in some way. The bands that performed include:

Andrew Krauss, the public relations and community events coordinator for Chippewa Valley Music Festivals, said although this is technically the first “Night for the Fight” event, they put on a similar event called “Karaoke for the Cure” in the past and they wanted to build off that foundation.

“I’m proud to be able to do something for the community like this,” Krauss said, “and we hope people continue to support us and that it continues to grow.”

The planning of the event started in early January, and the resources needed to put on the “Night for the Fight” were donated. Additionally, all of the proceeds from the event were given to the American Cancer Society and the Gilbert Brown Foundation.

Chris Mcintyre, guitarist and lead vocalist for the band Filthy Sweet, said he’s happy to see people donate to good charities and pay respects to those who have been affected by cancer. He enjoys seeing people “keep the fight alive” with shows like these.

“It’s cool because even if one band is not your cup of tea, you got five or six other bands that you can watch that have different styles,” Mcintyre said. “It opens everybody else up to something that they might not have heard before.”

Mike and Barb Tzanakis, who were attending the event, said they decided to come to “Night for the Fight” because they like live music and they are fans of the events put on in Owen Park and Phoenix Park.

The Tzanakis’ said although they were looking forward to all of the bands, their favorite was Big Back Yard. In addition, they said they appreciate the cause and planned on donating and bidding at the silent auction.

For more information about “Night for the Fight,” visit the event’s website.