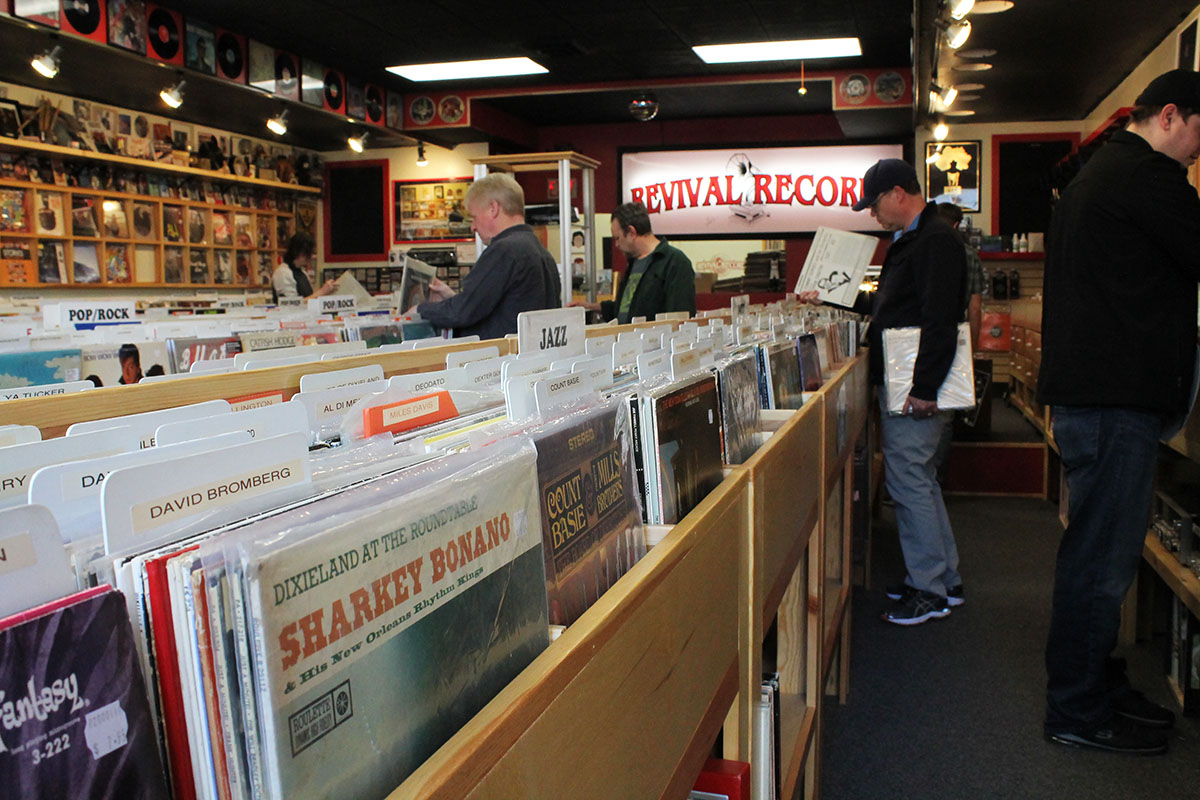 Revival Records along with The Local Store honored a traditional form of music consumption by selling music and keeping record stores in business.

Years of following the band; months of listening to the music; weeks of learning the lyrics; hours of searching the internet and the hunt is all over the moment you walk through the door.

“Seeing a customer find something that they have been looking for, for a long time and seeing their eyes light up,” Billy Siegel said, “that is true joy to me.”

Siegel is the owner of the Eau Claire record store, Revival Records, and he said his favorite part of owning a record store is the gratification of satisfying a customer on their journey to find the vinyl for which they had been searching.

According to the Record Store Day website, the holiday was created in 2007 collectively by a group of independent record store owners and employees. It is a day to “celebrate and spread the word about the unique culture surrounding nearly 1,400 independently owned record stores in the U.S. and thousands of similar stores internationally.”

In celebration of the annual holiday, Revival Records and The Local Store offered deals on records in store and encouraged the support of local music. VolumeOne’s program and store manager, Lindsey Quinnies, said because they have a limited supply of vinyl in store, she also encouraged shoppers to visit Revival Records.

“Celebrating the places that sell music and emphasizing them and getting people to know more about them is ultimately important for any music scene,” Quinnies said. “Just to keep the ball rolling with the momentum of music as part of the community especially in Eau Claire which has such a vital music scene too.”

Siegel said Record Store Day is his biggest day of the year. During the celebration, Revival Records has records on sale that are only available that day. On display exclusively this past Saturday, Siegel said his favorite vinyl was Jason Isbell and the 400 Unit.

Because he is the owner of Revival Records, Siegel said he lives and breathes music. As a form of music consumption, Siegel said he enjoys the act of listening to records because the process is more interactive.

“There is no fast forward or rewind,” Siegel said. “You actually have to physically lift the needle over if you want to skip tracks. It forces you to listen to the whole album rather than just listen to the tracks you like.”

In addition, Quinnies said she the physical album itself, including the artwork and possible songbooks inside, along with the different sound music has when it is pressed on vinyl are why this musical medium is becoming increasingly more popular.

“Vinyl in general — I think people feel more connection than they do to a digital form because it is something tangible; you can hold it in your hand,” Quinnies said. “Also, the quality of the sound is something that people are appreciating more and more as people are moving away from hard copies of music.”

Seeing that the day was created to keep record stores in business, both Eau Claire stores honor the holiday year-round by selling and promoting records.

Siegel said, even though technological advancements are on the rise, vinyl is already making its comeback.

“I believe that mom and pop shops will actually, pretty much be the heart and sole, the backbone of the U.S. economy eventually,” Siegel said. “So having a brick and mortar record store, you get to actually interact with each customer one on one, and help them out. It is something that you can’t get online.”