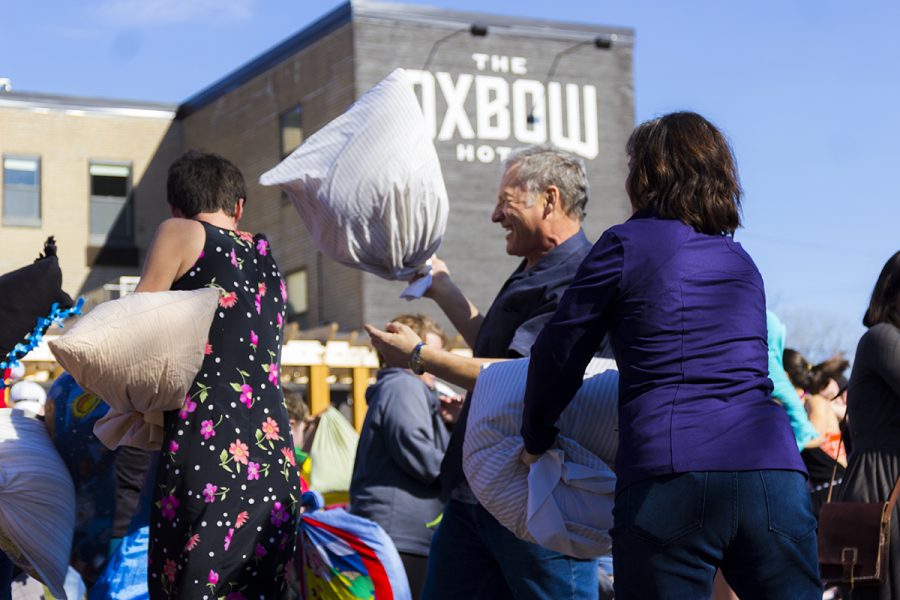 For many, April Fools’ Day comes across as an opportune time to prank friends and family.

While most might recall their April 1 pasts of mixing foods up in the pantry, saran wrapping doors shut or placing shaving cream in the hands of sleeping loved ones for a rough wake up call, the Eau Claire community engaged in an uncommon tradition on this special day — and after a four-year disappearing act, it was back and fluffier than ever.

Volume One’s 2017 “April Fools’ Day Pillow Fight” began at 4 p.m. at the Oxbow Hotel’s courtyard in downtown Eau Claire Saturday, with a countdown and a whistle blow signifying the start of the fight. Participants of all ages then had exactly five minutes to commence in feathery pillow combat, throwing their “weapons” up, down, around and — of course — at each other.

“It was so crazy,” said Mandy Behling, a pillow fight participant and freshman integrated strategic communications student. “I didn’t really know what to expect, but it was cool to see everyone come together in the community and do something fun for April Fools’.”

As stated before the fight began, the ground rules for the pillowy battle were simple: pick on pillow fighters your own size, do not swing at bystanders without pillows and engage in the event at your own risk. After all, you never know if the guy creeping up behind you has a deadly swing.

While the action, codenamed “five minutes of feather fury,” was relatively short, the overall event was a much longer affair, complete with a costume contest, best pillow contest, a teddy bear cannon and lively music to match the atmosphere.

Afterward, winners of the contests received prizes such as a free overnight stay at the Oxbow Hotel, a $50 gift card to The Lakely and a $20 gift card to Volume One’s The Local Store. Participants as well as bystanders were also welcome to convene in the Oxbow Hotel lobby for snacks and refreshments.

The citywide event first took the spotlight in 2006, and carried on through 2012 as a community tradition before taking an “indefinite hiatus,” according to Volume One’s website. This past weekend was the city’s first pillow fight since the hiatus.

“I’m glad they brought it back,” Coker said. “It was nice to actually get to experience it, instead of just hear stuff from past years. I hope they keep it going for the long run now.”

According to Volume One, the justification for the event being held on April Fools’ Day of all days is simple — “It’s a foolish, fun celebration of a great American holiday.”