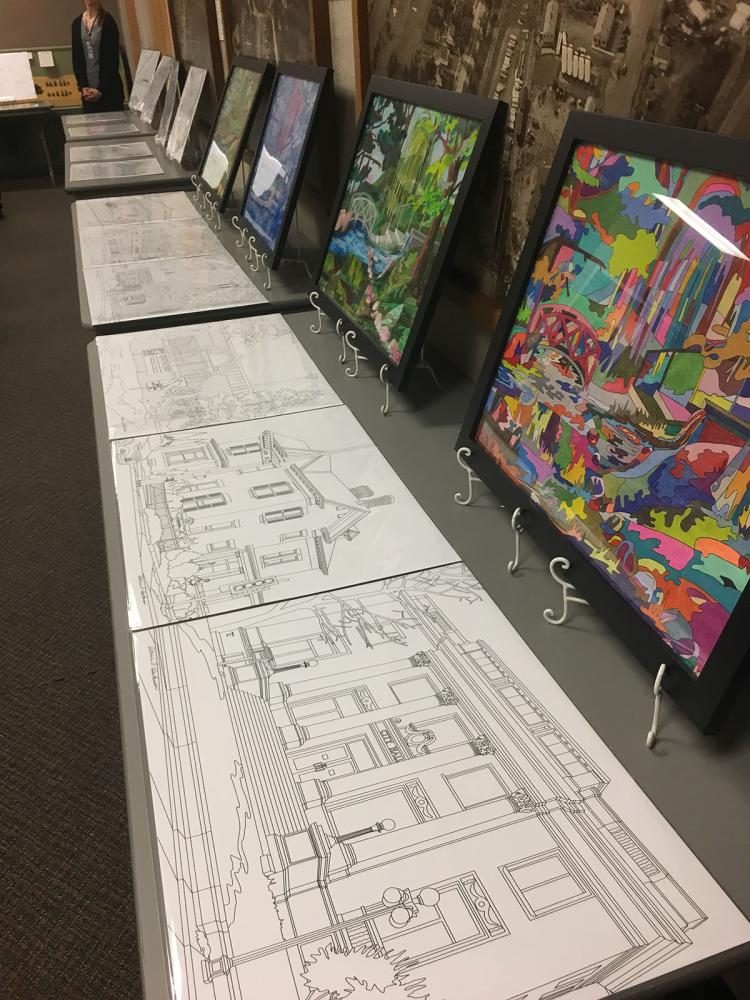 Phoenix Park; Acoustic Cafe; Lismore Hotel; L.E. Phillips Memorial Public Library: Iconic scenes of Eau Claire, all of which are now memorialized forever in black and white lines in a coloring book of the city.

Patricia Hawkenson, creator of Color Eau Claire, launched her coloring book Tuesday, April 25 at the Chippewa Valley Museum. There, visitors could look at the scenes she drew, all at poster sizes so the details would be visible, and more importantly, crisp.

The 40 images in the book range from parks to restaurants to shops of the city, all places that hold special significance for Hawkenson. However, she said they’re not intended to be exact replications of the scenes.

“It’s not meant to be a photograph of the park. It’s meant to be what I feel about the park when I look it,” Hawkenson said of a drawing of one of the city’s parks.

At the launch, Hawkenson showed and discussed each piece of art in the book, and even some that didn’t make the cut. Each was given to the entity represented, with some representatives meeting Hawkenson at the front of the room to receive the artwork to talk a little about their organizations and what they planned to do with the piece or pieces they were walking away with.

The book is dedicated to Hawkenson’s late mother, who she said had a special way of coloring in a small spiral pattern. Remembering this, Hawkenson said, made her excited for the ways other people will color the images in the book.

Hawkenson said her goal was to represent each scene in a way that honored each place depicted. She said she took artistic liberties in her work to improve the images. Despite the fact she changed some details, like the placement of foliage or the existence or nonexistence of people, she said she aimed to do the scenes justice in accordance to her memories.

“As small as those memories may be, they are our memories,” Hawkenson said.

She also said she wanted to capture iconic scenes of Eau Claire. In the process, she thought about not only places that were important to her, but she considered what things other people would remember.

For example, one image of a diner in Eau Claire called the Classic Garage originally had a car in it. When Hawkenson thought she was done with the piece, she found out the type of car she drew didn’t fit the scene,  so she drew in a whole new car just a few days before the image was set to print. This, she said, was because she felt a need to get it right.

Christy Butterworth, one of the launch’s attendees and Hawkenson’s nephew’s wife, said she came to support the launch. She said she couldn’t think of anyone better to create a work like this because Hawkenson is a local resident and “does everything from the heart.”

“You can tell from the images she’s trying to capture all the nostalgia for the people who have been here, and present it to those that are new to the community,” Butterworth said.

Butterworth said as someone who has lived in Eau Claire most of her life, she feels a connection to some of the images Hawkenson chose to include in the book, such as those of Chippewa Valley Technical College and Memorial High School, both schools she attended.

The coloring book will likely be popular, Butterworth said, because there is an increase in convergence in the area.

“I think things like this will be well-received because there is, especially now, kind of a growing sense of pride within Eau Claire,” Butterworth said.

Color Eau Claire is available for purchase at The Local Store, Tangled Up In Hue and Chippewa Valley Museum. Hawkenson said she is currently working on a historical fiction novel and may create more coloring books in the future.