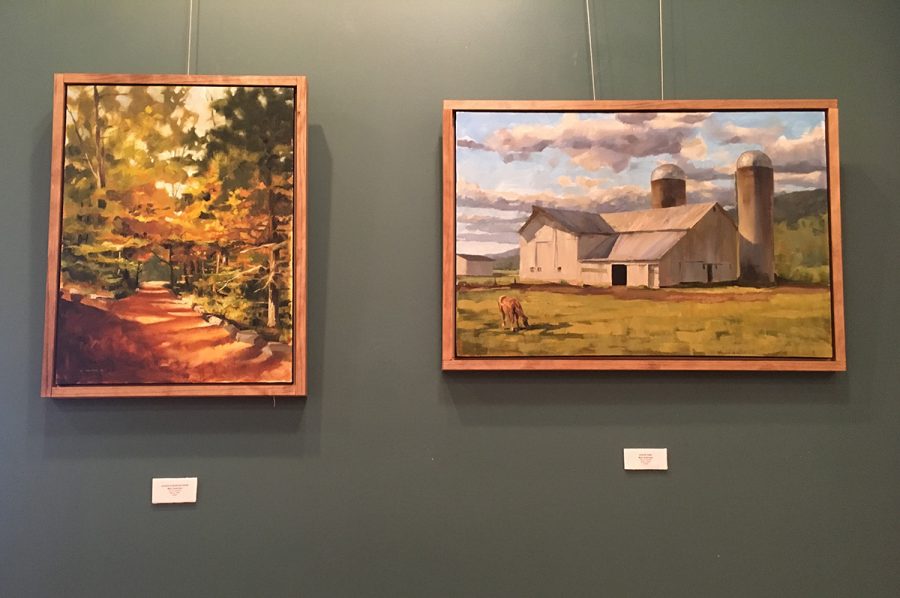 Traditional impressionistic oil paintings have taken over the walls at Volume One’s gallery, showing mainly scenes of outdoor rural Wisconsin and the insides of dining places.

Featured artist, Marc Anderson, said this show is a bit different from his usual work because he typically does “illustration for painting,” but he was asked if he wanted to be in the gallery and decided to dedicate his time to creating this collection, “The Meeting Place.”

The majority of the paintings, which vary widely in size, showcase the beauty of outdoor Wisconsin, depicting streams, barns and seasonal scenes. Another painting, Anderson’s favorite, portrays a busy hibachi grill in Florida, full of seated customers and chefs in tall red hats.

Regardless of their differences, Anderson said there is one thing in common between all of the paintings.

“Mostly when I’m painting, I’m just focused on light and how it affects the subject matter, either with reflected light or how a surface reacts,” Anderson said. “In the end, it’s all about light.”

He said light is important because it affects the colors of the paintings and whether they are warm or cool in value and temperature.

This is Anderson’s first solo show; he has been in a number of shows with other artists before but never alone. This, he said is a little uncomfortable because he is unused to drawing attention to himself, but is a positive experience nonetheless.

“It does feel good, just seeing all these paintings together at once,” Anderson said. “It’s validating in a way, and it kind of feels good to reflect on, you know, that’s a lot of hours sitting in there. To take a step back and see them all as a show is pretty nice.”

Anderson said he hadn’t tried oil painting until he and a friend took a workshop two years ago. Being relatively new to impressionistic oil painting, he said he has had experiences in which the paints don’t react together the way he wants them to but appreciates the paint’s slow drying time because it frees him up to do much more within the paintings.

Art has interested Anderson since he was very young, he said, as he always enjoyed drawing and the challenge of depicting what he saw.

Barb Cramer, a woman who attended the art reception, said she and her husband came because they believe in supporting the work of local artists. After looking at the collection, she said she enjoyed the paintings and their realism.

“He captured all the shadows and the essence of being right there,” Cramer said. “I felt like I could put myself right there.”

Having dabbled in art herself, Cramer said she knows what it takes to create pieces like Anderson’s and thus has a great appreciation for him and his work.

Kiah Sexton, an employee at The Local Store and senior at UW-Eau Claire studying secondary English education, said she really enjoyed Anderson’s collection because she could relate it to her own personal experiences.

“A lot of this reminds me of the farms by my grandma’s house and it kind of takes me down memory lane,” Sexton said.

One piece in particular — a painting featuring a blue barn — elicited a guttural reaction from her, she said, because it was so stunning.

She said previous artworks in the gallery have been done in different mediums, like encaustic painting. This is the third or fourth show that has been on display since she began working at The Local Store, but she said this one in particular made her think, “This is Wisconsin.”