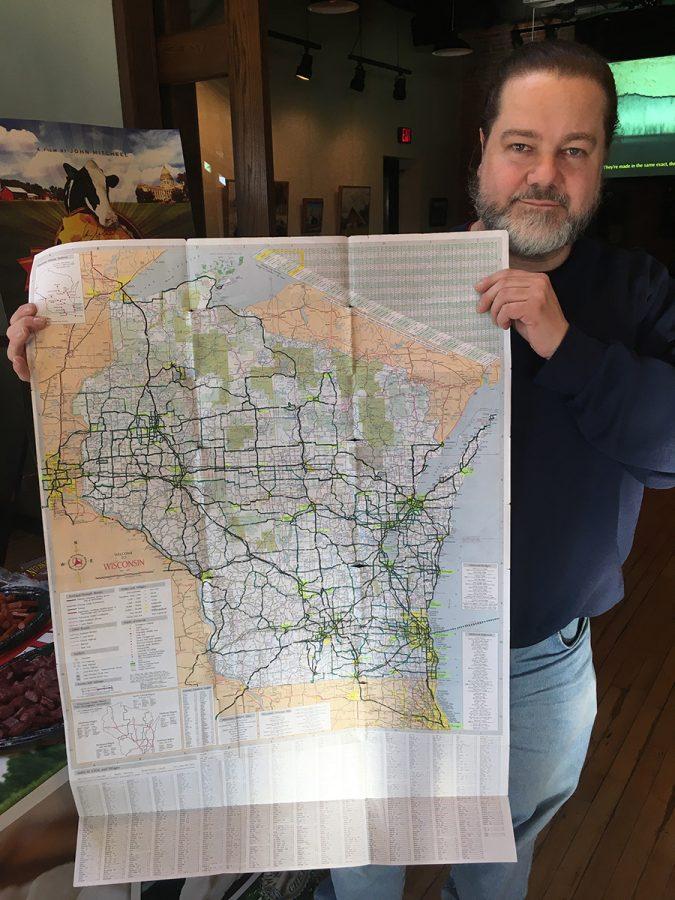 John Mitchell holds a map tracing the roads he took and highlighting the towns he visited in the process of filming “Cheeseheads,” a documentary about Wisconsin.

After spending 20 years away from the Midwest, one man decided to venture back to his home state of Wisconsin to rediscover his roots, only to create a movie in the process. The fitting name? “Cheeseheads.” Now comes time for this man to celebrate and reflect on the film.

John Mitchell, creator of the Wisconsin-focused documentary, “Cheeseheads,” came to Eau Claire Saturday to screen his film at the Local Store and indulge in all things Wisconsin.

The event, called “Grown Local, Going National: a ‘Cheeseheads’ Documentary Celebration” hosted small crowds at both the 2 and 4 p.m. showings. Nueske’s meats and Ellsworth cheeses were available for the audience to nibble on and local businesses like Micon Cinemas and Tangled Up In Hue had raffle baskets for people to bid on.

Mitchell said the screenings at the Local Store in Eau Claire were important to him for two reasons. The store, he said, is all about Wisconsin, Eau Claire, good art and good people, which is everything he’d want to say if he owned a store; but the city itself is close to his heart in a different way.

“Eau Claire has always been important to me, as sort of the small-town boy reaching out to the big city … ” Mitchell said. “You get to huge cities out there, yet the little boy, the little Wisconsin, small-town Midwest boy does not go away, no matter how you try to run away from it or hide or escape.”

Mitchell, who grew up in Cameron, Wisconsin and later moved to California, said he created this movie for a purpose.

“I went to the Rose Bowl … and in my head, I was thinking, ‘The cheesehead story has never been told — the true version,’” Mitchell said. “Everybody just assumes it’s a hat and a Packer fan, and I thought, ‘Well, there’s a bigger story to be told.’”

The documentary features many aspects of small-town Wisconsin life from boating to football to much more. It features notable faces from around the state, as well, such as Miss America 2012 — Kenosha native Laura Kaeppeler — and Governor Scott Walker.

Also in the movie is former Green Bay Packers Placekicker and Hall-of-Famer Chester Marcol, who was present at the celebration. Originally from Poland, Marcol said seeing the documentary was a real learning experience about the state. Despite his nine seasons playing for the Packers, he said he never knew some of the things about Wisconsin the movie touched on.

Times have changed, Marcol said, and traditions like the cheesehead and Lambeau Leap have gained more popularity over that time.

“I don’t remember very often anybody calling too many people ‘cheeseheads’ when I was here in the ‘70s,” Marcol said, “but everything changes and everything grows.”

Eau Claire resident, Kathy Robinson, who attended the 2 p.m. screening, said she learned a lot from the film and felt it was a heart-warming experience after watching it here for the first time.

“(Being a cheesehead) is something to say you are proud of Wisconsin,” Robinson said. “That’s what it is to me: Saying ‘I am from Wisconsin and I am proud of it.’”

Spending two decades away from Wisconsin gave Mitchell the opportunity to salvage his roots and create a story that he said he hopes will be able to tell history 100 years from now while educating and entertaining people today and sticking within “the boundaries of the truth.”

“I am so proud to be from here, and after leaving and coming back and doing this film,” Mitchell said, “I’m doubly — triply proud because who knew you could go home again and find out it’s even better than what you remember?”

“Cheeseheads” is available on DVD and was recently made available for online streaming on platforms like Amazon Video. For more information on the documentary, visit the website.