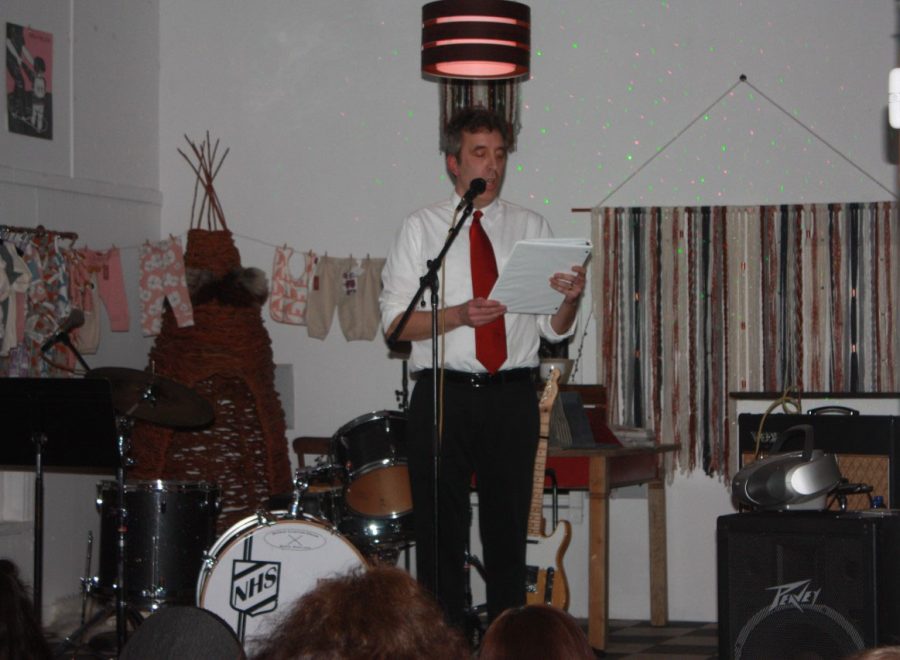 Ken Szymanski, one of three performers at the event, read stories exploring and reflecting on different types of love.

The event was held at 7 p.m. on Feb. 10 at Red’s Mercantile, an Eau Claire business located on Dewey Street. The small store was overflowing with attendees, causing people to continually scoot their chairs as close together as possible to accommodate all those who came to see the show.

Becca Cooke, the owner of Red’s, said she was happy with how the show turned out and hopes to continue the event each year.

“I wanted people to come here and have a space to gather and participate in art and poetry,” Cooke said, “and do something for Valentine’s Day that wasn’t centered around gifts, necessarily, but also words and music, because I think Valentine’s Day is more than that.”

Derick Black, Ken Szymanski and Andy Patrie, three performers of the evening, all teach English at different Eau Claire schools. Last year, Patrie participated in a similar show but when the man he performed with couldn’t do it again this year, he reached out to Black and Szymanski.

Black and Patrie made a band during their time at UW-Eau Claire, joining their musical forces after their old groups came to developmental crossroads. Patrie said they often played at the Cabin and at house parties.

The show at Red’s served as a 20-year reunion from the last time they played together, which Patrie said was one of the most meaningful parts of the show for him.

He said they went in with no expectations; though revisiting old songs was rusty at first, the rust soon flaked off and they were back in their groove.

“It felt healthy too,” Patrie said. “It wasn’t getting caught up in the headspace of ‘Oh we’re 22 again’ or thinking about being college kids, it was just about playing that music together again … that was the best part of this.”

The performance was broken into four parts. Black started by showcasing his singer-songwriter skills and was followed by Szymanski reading short stories about his life. Next, Patrie shared pieces of original poetry, some from college and some written more recently. The show was capped off by a musical performance by Black and Patrie.

From stories of stealing couches from rival college neighbors to poems about the happiness and heartaches of young love, the audience was swung through a multitude of emotions, sometimes laughing, sometimes captivated into silence.

One of Patrie’s students, Rebekah Hershman, is a junior at North High School and had high praise for the performance. She said she was blown away by the passion in their words and music, finding them to be relatable and raw.

“He says things in the most delicate way, even when they’re harsh,” Hershman said.

Szymanski said one factor that strengthened the group’s relationship was the shared experience of growing up in Eau Claire, going to college in Eau Claire and then just never really leaving.

“That used to seem like a pathetic idea,” Szymanski said, “but it’s really allowed for some deep friendships to form with a lot of history.”