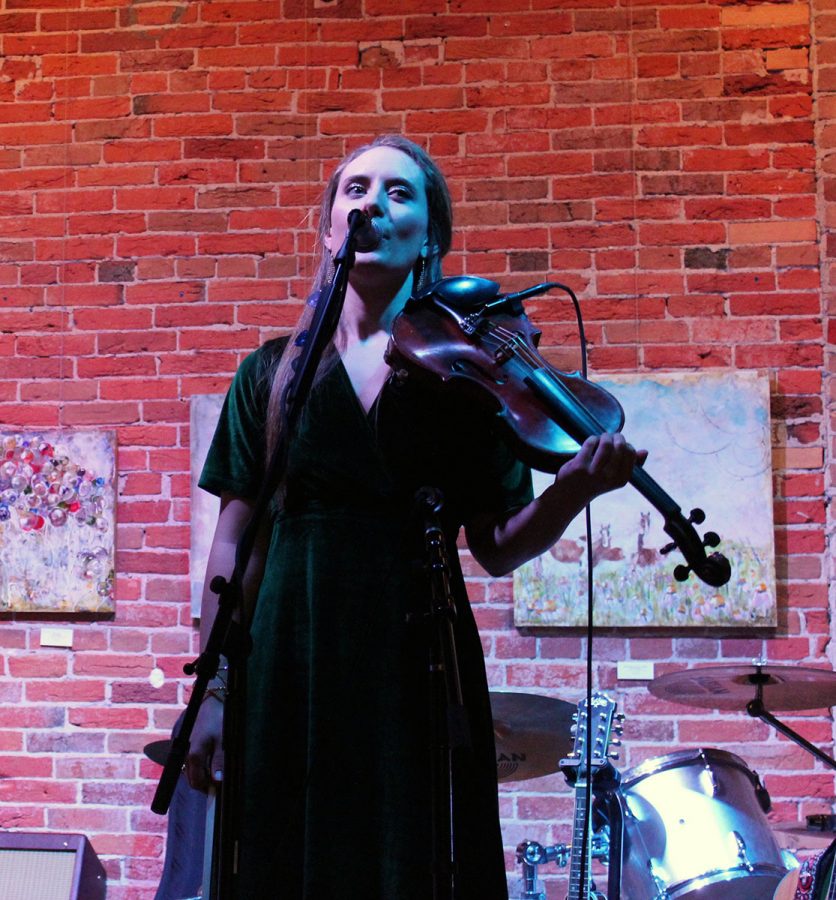 Singer-songwriter Bri Murphy, an Eau Claire native who spent the last five years in Nashville, Tennessee returned Saturday night for a concert at the Volume One Gallery. She switched between playing guitar, fiddle and the mandolin during her performance.

After living her dreams of becoming a professional musician in Nashville, Tennessee for the last five years, touring all over the world and releasing her debut solo project last October, singer-songwriter Bri Murphy can still see the marks growing up in Eau Claire have had on her music.

“Definitely who I am as a writer and a musician would not be nearly the same if I hadn’t grown up here and been exposed to the wonderful teachers and programs and culture that we have in this area,” Murphy said. “It’s very important to me and I’ll always hold it very dear to my heart. It’s had a huge impact on who I am.”

On Saturday night, Murphy got to share her journey and some of the many stories that come with it to a Volume One Gallery packed to the brim with people, spilling out into the Local Store and the lobby sitting area.

“(The concert) was a really special experience for me,” Murphy said. “I was home and it was really amazing to see so many people come out and support what I have been up to. Just knowing that I have them backing me from 700 miles away is a really special feeling.”

The audience largely comprised Murphy’s family, friends and former teachers, with only a few “new faces.” Still, Murphy began the night greeting the audience and introducing herself to those she didn’t know, creating the relaxed atmosphere that made her comfortable enough to intersperse stories and commentary between each of her songs over the course of the show.

“Eau Claire, you look so beautiful,” Murphy said at the concert’s start. “Thank you for being here.”

John and Joan Gunderson, two audience members, said they attended the show because of their ties to the Murphy family, having been their neighbors when the Murphys had first moved to Eau Claire, even before Bri was born.

“I remember the day that Gordy (Bri’s dad) came across the street and told me that his wife was pregnant with her,” John Gunderson said. “Gordon was so excited when he came to tell me, so it’s crazy to see her now. We’ve known them a long time.”

This marked the first time the Gundersons have seen Bri since she was little, Joan said.

“She looks just like her mother,” Joan Gunderson said. “I enjoyed it very much.”

Local singer Caitlin McGarvey opened for Murphy, complementing Murphy’s folksy-Americana sound cultivated by Murphy’s raw vocals that seemed to be mindful of each and every note and riff, as well as heavy guitar influences and a strong and steady drum beat.

Although Murphy’s guitarist Liz Warren was the only member of her band to accompany her all the way to Wisconsin, Murphy managed to assemble a full band composed of Eau Claire natives Alex Vang, who played bass, and Ben Peterson, a childhood friend of Murphy’s who was on drums.

A multi-instrumentalist, Murphy herself also switched between playing guitar, fiddle and mandolin throughout the night. Also to join her on stage was her dad, Gordon Murphy, who was her keyboardist for the night.

Murphy said it’s “awesome” to have her dad’s support, not only in her personal life, but in her life as a musician, as he, a musician himself, often plays the keys for her when he’s able.

“It’s kind of full circle for him,” she said. “But everybody up there last night was a phenomenal musician, especially considering we didn’t rehearse together as a band until the morning, so it really came together well.”

Murphy played songs mostly from her debut record, an extended play entitled “Throw Down My Heart,” which she released in October 2016.

The EP was largely inspired by Murphy’s time touring, she told the audience during the performance, the six songs encapsulating many of her experiences on the road.

“It’s an album that was a lot about healing,” she told the audience during the concert, “because the experience (touring) was not always wonderful.”

Murphy also played some new songs that will be featured on her next project — a full length album.

“I’m really looking forward to getting back in the studio and making some more music, because I think starting the solo project was the hardest thing for me was getting it going,” Murphy said. “So now it’s off and running … and the things that I’ve learned along the way are going to be a lot easier to build the momentum on as I move forward.”

Saturday night, Murphy hopes, will be the start of returning to her hometown more often to play. But, next time, hopefully with a new album and a whole new batch of stories to share.

“I’m really excited to get back to Eau Claire,” Murphy said. “It’s been quite the journey, but I wouldn’t trade it for the world.”