Paying tribute to the lives lost at the Orlando nightclub 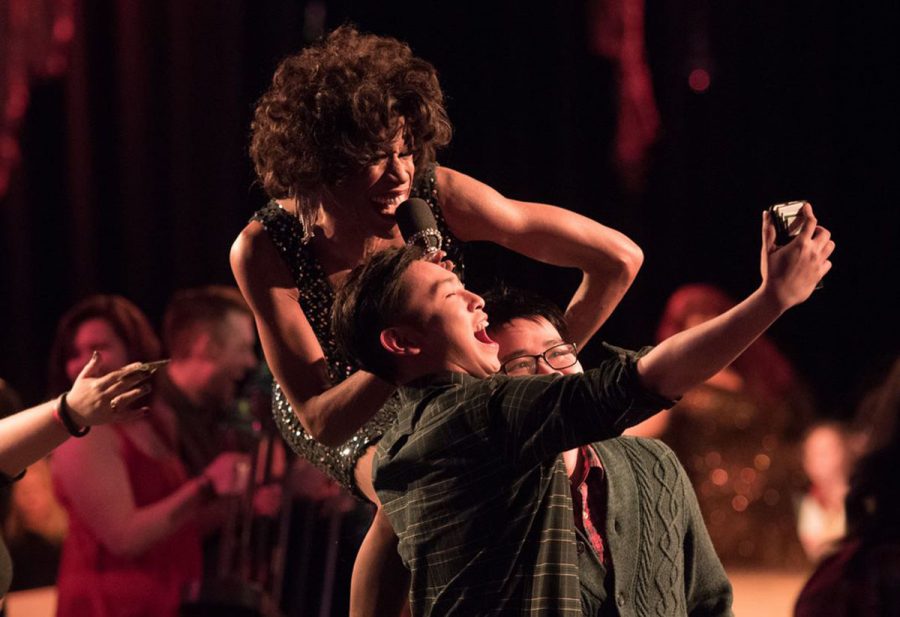 The photograph above was taken at the 2016 Fire Ball. This year, with the theme ‘Pulse,’ the show will be lined with memories of the shooting at the nightclub in Orlando remembering the passing of the victims and celebrating their lives.

A night drenched in bold reds, pulsating with powerful music and accompanied by intricate acts enriched with an impactful message.

The UW-Eau Claire 2017 Fire Ball drag show Feb. 24-25 tackles a new theme for their sixth year that Christopher Jorgenson, the director of Women’s and LGBTQIA+ Resource Center and creator of the event, said is meant to evoke a variety of emotions in the performers and the audience.

Titled “Pulse,” Jorgenson said this year’s show contains a tribute to the mass shooting at the Pulse nightclub in Orlando, Florida in the form of a memorial intended to not only remember the lives lost but also to celebrate their lives and others. In addition, he said each performer within the show will be adding their own personal experiences with the incident in their acts.

“They (the performers) wanted to be sure to speak out and to speak out loudly at a time when it is desperately needed,” Jorgenson said. “Not just to fight back, but to also create community.”

Jorgenson said each year has a different theme and venue design, but the same structure of the show itself, containing 10-15 professional drag queens performing their personalized acts, is maintained. Not only do the yearly performances differ, but both nights have different stories being told by the performers themselves.

Kallie Friede, a fifth-year senior public relations student, has been an intern for the Women’s and LGBTQIA+ Resource Center for two years but has attended the Fire Ball for the past three.

Working at the office, Friede said she gets to contribute to events put on by the LGBTQIA+ community including the Fire Ball and through her work she has seen how important it is to have an event like this on campus. She said this year they are focusing on activism, reflecting on events the past year.

“Between this year and last year, there have been things in popular culture and in the news that have impacted the LGBTQ community in particular,” Friede said. “This year is focusing on commemorating the Pulse massacre but also thinking about the how we can organize and move forward from these events.”

Kicking off in 2011, Jorgenson said he started the Fire Ball because he saw other universities with drag shows and thought it would be a great addition to the LGBTQIA+ community on Eau Claire’s campus. In terms of the name, he said he thought fire created powerful imagery that would cause people to inquire about its meaning.

When creating the set list for each show, Jorgenson said he likes to bring in new performers as well as keep the local ones who have been with the show since the start.

This year, 15 professional drag queens from all around the nation are signed up to perform in the show, some from as far away as California, Las Vegas and New York. Friede said, this year also includes the first comedian headliner, Bob the Drag Queen.

“It is nice that UW-Eau Claire has an event that is centered around the queer community, that has a reputation around the country truly, that makes people want to get involved with it,” Jorgenson said.

Not only is the Fire Ball meant to be a form of entertainment, but also being held on a campus, Jorgenson said he takes the opportunity to make it also educational. In the show, Jorgenson said they will have information about the queer community that will serve as a chance for others to learn more about the community as a whole.

The Fire Ball will have all of their proceeds raised at the event, which come from ticket sales and money given to performers during the show, go back into the LGBTQIA+ program and other entities on campus, such as the Campus Harvest Food Pantry.

Those who are attending can expect a full evening of music, dancing and creating bonds that will bring everyone together, Friede said.

“It is going to be a really fun show,” Friede said, “but also a really important one as far as creating community and the space for people to come and be whoever they are, exactly the way they want to.”

Tickets for the Fire Ball are available for purchase online or in person at the Service Center in Davies. For more information about the Fire Ball, visit their website.