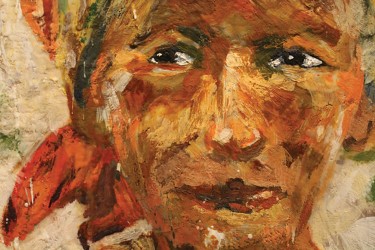 One of Kay Geraghty’s featured works as a part of her series “People of Cuba.” Geraghty’s work is on display at Volume One as part of the encaustic paintings exhibit.

Art comes in an expansive variety of forms. At the Volume One Gallery, its range of displayed local artwork now spans even wider.

The Local Store welcomed artist Kay Geraghty’s “Encaustic Painting: The Fusion of Hot Wax and Mixed Media” to its gallery on Friday, Jan. 13. Encaustic is an ancient medium used by the Greeks dating back as early as the fifth century BC.

Geraghty uses a mixture of natural beeswax and dammar resin, or crystallized tree sap, which can be pigmented and applied in layers or used alone as a transparent adhesive. Her work usually contains between 15-25 layers of wax or whatever media she may find and sees fit.

In addition to wax and dammar resin, her work incorporates the use of materials such as tissue paper, watercolor paints, oil bar, writings, pieces of photographs, India inks, pan pastels and even roofing tar to achieve a multitude of textures, colors and effects that have viewers in awe.

UW-Eau Claire alumna Aubre Walther, who graduated with a degree in graphic design in 2013, explained her fascination with the artwork.

“I like getting close to it and thinking about the process of how it was made,” Walther said. “And I like that I don’t really know.”

The Volume One Gallery features multiple series of Geraghty’s work, including “The People of Cuba,” “Out of Africa,” “The Hat Series” and the “The Little Red Boat.”

Janae Breunig, the graphic designer for Volume One Magazine, said Geraghty’s artwork is a big hit at the store.

“It’s having a really great response so far,” Breunig said. “(Encaustic) gives it a more 3-D effect, and it seems like a lot of people have different favorites of pieces, which is always a fun thing to see.”

Breunig said it all began when Geraghty submitted a few pieces of her work to the store in the hopes of being selected during the middle of last year. In November, a group of staff members then decided which artists’ work would be chosen for the coming year.

“It’s kind of a combination of scouting and submission,” Breunig said.

The gallery typically shows five artists’ works throughout the year, each displayed for about two months. At the end of the year, the Volume One Gallery has its annual ink and paper sale, in which artists’ prints are sold for affordable prices, Breunig said.

Walther, who frequents the Volume One Gallery when new art is on display, said she can’t seem to get enough of it.

“The Volume One store has very unique stuff, and the same goes for their gallery,” Walther said.

Geraghty’s artwork is available to the public for view and purchase at the Volume One Gallery now through March 4.