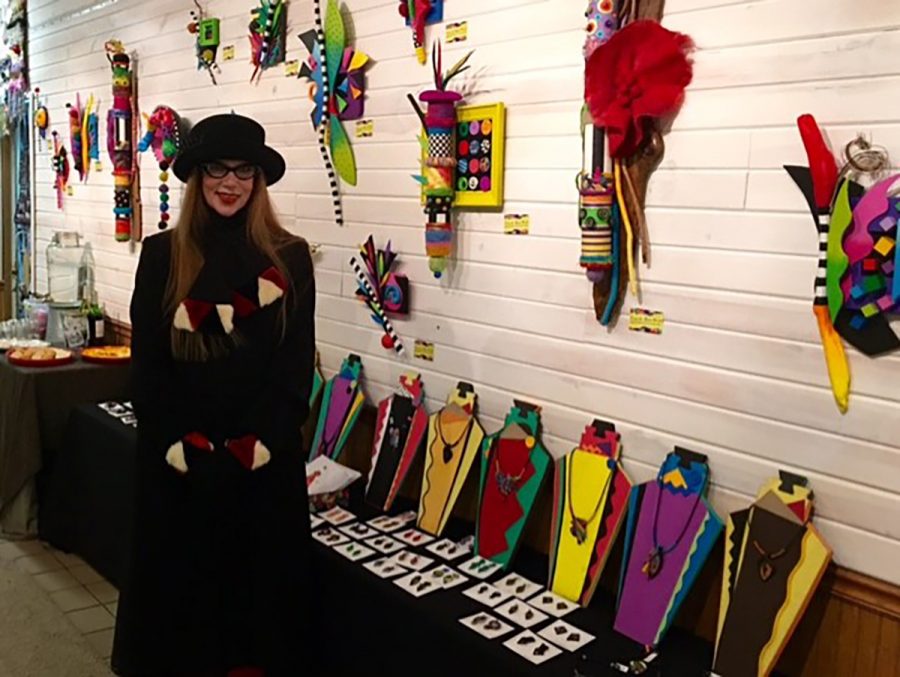 Upon entering Tangled Up in Hue, a local art shop, patrons were greeted by a kaleidoscopic wall of color, featuring the latest artist of the month’s work.

Artist Christy Skuban’s work distinguishes itself with bold colors and uncommon designs. Through these artistic choices, Skuban said she learned to unleash her inner joy, even when she was going through challenging times.

“I hope that my art will convey to the viewer a sense of playful comfort and happiness even if they too are going through hard times,” Skuban said. “I just want my work to put smiles on faces.”

Although she now mainly focuses on jewelry making, Skuban said her career path has changed many times over the years. Intending to be a fashion designer, she attended both The Art Institute of Chicago and New York’s Parsons School of Design.

However, instead of becoming a fashion designer, Skuban said she began working for Saks Fifth Avenue as a visual merchandising fashion stylist for their windows and interior displays. Then, to further her art and design skills, Skuban began taking classes at The Art Student’s League of New York.

“I fell in love with abstract painting and wall sculpture,” Skuban said.

There, she created many large scale pieces which required a smaller model to be made first. People began suggesting Skuban transform these models into brooches and jewelry, and thus, Skuban’s jewelry making career began.

After many years of living in New York, Skuban said she returned to the midwest in 1991, where she continued to create jewelry made from polymer clay. The display at Tangled Up in Hue not only features an array of necklaces and earrings but larger wall hangings as well.

Skuban described her art as “mixed media” in which she incorporates a number of materials to express herself. She said she often uses woods scraps, pieces left over from previous works of art, handmade felt and other materials, such as wire, yarn and clay.

Kate Beaton, an employee at Tangled Up in Hue and graduate of UW-Eau Claire, said Skuban’s art is unique and draws the attention of many patrons.

“Her work is very colorful and funky, and it incorporates a lot of geometry and different shapes,” Beaton said. As the hangings are also three-dimensional, Beaton said they are more interactive than paintings, for example.

Many of Skuban’s wall hangings seemed to leap from the wall, often utilizing every color of the rainbow, from bold scarlet to vivid turquoise. The asymmetrical pieces called attention to many different features, following new lines each time it’s looked at.

In addition, a nature motif seemed to appear in Skuban’s jewelry and wall hangings. Shapes resembling flower petals and fresh leaves adorn many of the pieces. On one hanging, a red felt flower marked the focal point.

Although the pieces share similar attributes, no two are alike; perhaps a result of her artistic process, she said.

“I never have a preconceived idea when I begin a new piece,” Skuban said. “I just start with one or two interesting shapes and then let the piece decide where it wants to go.”

Skuban’s art will be displayed at Tangled Up in Hue until Jan. 31. However, her work will continue beyond the end of the month. Skuban said she signed on with Artisan Forge Studios in May 2016, which is fast becoming a hub for local art in Eau Claire.

Being part of the community at Artisan Forge Studios has helped her develop as an artist, Skuban said, by not only allowing her a personal space to work, but also the opportunity to support and collaborate with other local artists.

“Eau Claire is becoming quite a hub for local art, and it is beginning to get the recognition that it deserves throughout the state of Wisconsin,” Skuban said. “I know that I have a lot to offer as an artist, and I want to play a larger role in what’s happening here.”