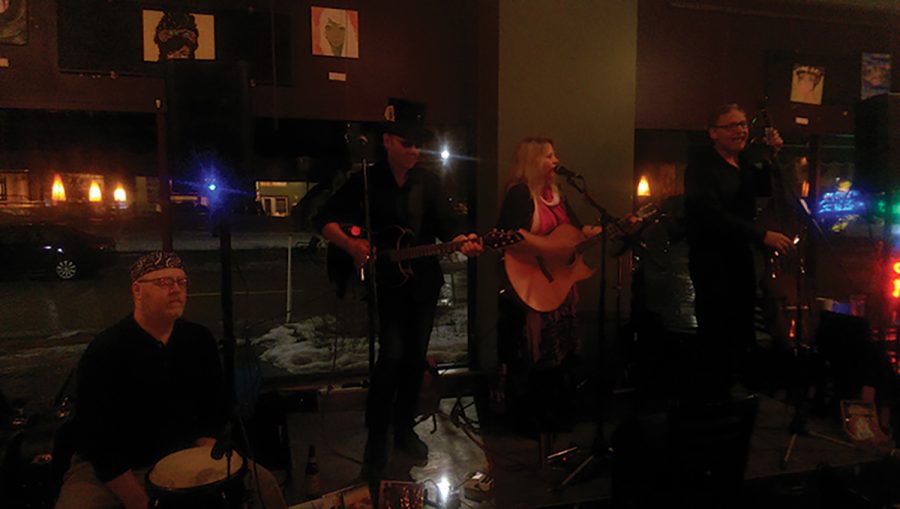 Acoustic-based group, Wolfsong, will be releasing an album later in spring and performed at Acoustic Cafe on Friday night. Instruments featured are the upright bass, acoustic guitar, conga and a cajun.

Acoustic music is the name of the game for local band Wolfsong. The Euro-gypsy rock band came to the Acoustic Cafe Friday night to share their new sound with the Eau Claire community.

Kai Ulrica, Nikk Wolfe, John Strei and Larry Past comprise Wolfsong and have been performing since September 2016. Later this spring, they will record their first album together.  With the group’s recent start, Wolfe said they are hoping to become more cohesive as time goes on.

Performing original songs as well as covers, the band’s sound comes from two acoustic guitars, an upright bass, conga drums and a cajun and some songs also feature the harmonica. A cajun looks like a box and makes a sound similar to a shaker and drum in one.

Although the band is relatively new, Wolfe and Ulrica’s former band Wolves at the Door influenced Wolfsong with similar vocals and tunes. The duo were the core of the group but had other backup players. Wolves at the Door released two albums, one in 2004, “Main Street is Empty” and another in 2007, “Unforgiven.”

“Most of the tunes are acoustic guitar and that is kind of the same thing we wanted for Wolfsong,” Wolfe said.

Past, the upright bass player in Wolfsong, is in another band called LP3. Ulrica and Wolfe, having played together since 1999, were interested in playing with him, and last July, they started having jam sessions together. Then, they met John later in September right before their first concert at UW-Barron County.

Ulrica said the group wants to gain more attention and popularity as they continue to play. With that in mind, Wolfsong will play wherever they can.

Music offers unlimited opportunities for expression, and for Ulrica of Wolfsong, music allows her to communicate without being afraid.

“I am shy and I don’t talk, but I can sing and I can get in front of people but I can’t talk in front of anyone,” Ulrica said. “I can do so with music and that’s my communication.”

Maddie Greuel, a junior graphic design student, said she has heard Wolfsong before and not only enjoys their music, but likes them as people as well. She said she enjoys music from the 1970s and Wolfsong embodies that era, in her opinion.

A variety of songs made the playlist for the night, and all focused on different themes in the human experience. A few of their covers were Leonard Cohen’s “Hallelujah” and Soul Asylum’s “Runaway Train.” The band shined a light on happiness and sadness, singing about hope and death.

“Sometimes you want a song that tells a story,” Wolfe said, “other times you just want to convey some kind of emotion.”

The band will be playing again on Feb. 3 at The Oxbow Hotel in Eau Claire and will release their first album as a band in March. They also have a Facebook page, where their events can be found.