The intersection between art and science

Reader’s theatre bridges the distance between Schneider and Haas 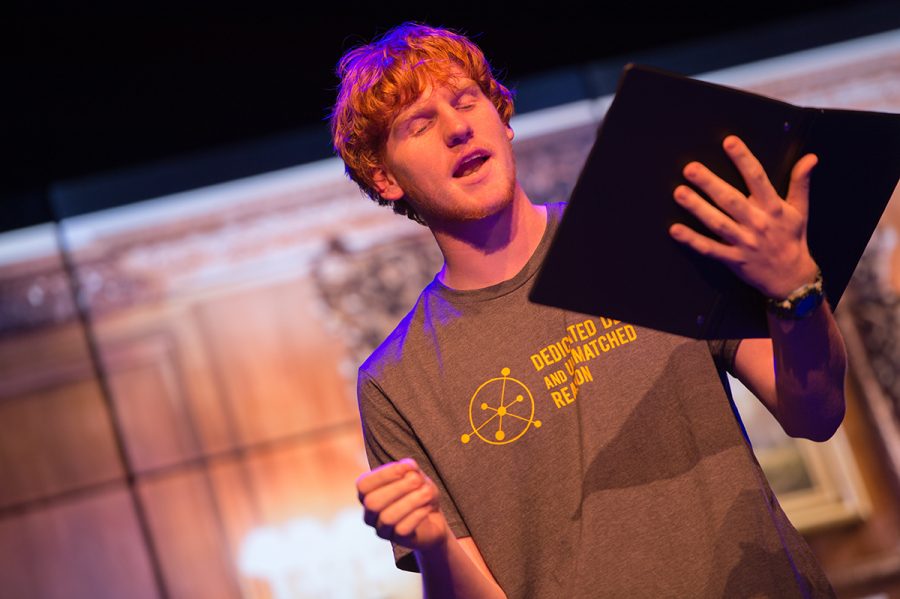 The knack of art may differ from the objective analysis of science, but these disciplines are not so different from one another.

We use art to tell the story of science, a craft which seeks to understand both the meaning of human relationships as well as our own identities in order to explore the novel curiosities of our strange and wonderful world.

Last Thursday, “Art AND Science: Dedicated Desire and Unmatched Reason” connected the junction between craft and fact, emphasizing that curiosity about our world is the common thread which ties together these not-so-different disciplines.

Sponsored by the UW-Eau Claire Foundation, the reader’s theatre event included four plays narrated by students from various departments in the hopes of validating that art and science are intimately connected in a way in which one cannot exist without the other.

The plays included “The (Curious Case of the) Watson Intelligence” by Madeleine George, “Silent Sky” by Lauren Gunderson, “Copenhagen” by Michael Frayn and “Picasso at the Lapin Agile” by Steve Martin.

Each play dealt with different issues, such as women in science, the future of artificial intelligence, atomic bombs as well as ideas which verged on genius. Although each performance tackled different issues, the idea that some things are fundamentally uncertain was present throughout.

Performers ranged from every discipline, bridging the gap between Haas, Hibbard and Schneider Halls on campus. While some performers were theatre students, others were math, physics and computer science majors. The diversity of student performers held true to the overarching idea of linking together disciplines.

Matt Jewell, assistant professor of material science and organizer for the event, commended the high student involvement, as students were the ones who wrote introductions to the plays, performed and did all of the behind the scenes production.

“We’ve worked as a group of faculty across disciplines to come up with these ideas,” Jewell said. “I’m really happy with how they pulled everything together, I think it turned out great.”

The third annual event challenges students to think both as a scientist and as an artist, he said. Eau Claire as a university embodies this idea of bridging together art and science because as a liberal arts college, students are forced to take classes from multiple disciplines to ensure they have the building blocks to become part of an educated citizenry.

“This idea of combining things that seem different is at the heart of Eau Claire culture,” Jewell said. “That’s what has given (this event) some resonance and has given it legs to run over the last three years.”

Paul Thomas, professor of physics and astronomy and organizer of the event, said the program was founded in 2014 in the hopes of exploring the intersection between art and science in new and creative ways.

The first event featured the showing of “Particle Fever,” a documentary about the Hadron Collider, the world’s largest and most powerful particle collider. The next year, Thomas and his wife as well as others performed music and narrated a description of our solar system with breathtaking pictures and musical accompaniment.

But this year, Thomas and Jewell decided to collaborate with Arthur Groethe and Jennifer Chapman from the music and theatre department, Jack Bushnell from the English department and James Rybicki from the physics and astronomy department in an effort to extend the project across campus and between other faculty members.

While Eau Claire may be blessed in its efforts to educate students from a liberal arts perspective, Thomas said he was not given those same opportunities when he was educated in Australia. He said it was in the United States where he learned to embrace this approach, one which he hopes to live by in his own teaching method.

“I think it’s important for an educated citizenry to have taken university courses across the spectrum and I think it’s an accurate reflection of the way the world is, that all of these things really are connected,” Thomas said. “I think Eau Claire does this better than the vast majority of universities. I’m really proud to be a faculty member here and I’m really proud of the students we have, including the ones who did such a fantastic job (at the event).”

From the spectacular performance to the overarching theme which resonated with students regardless of major, the reader’s theatre was an event which left you thinking from start to finish. With humorous appeal and scientific fact, the event truly embodied the intersection between art and science.