Reservoir brings their indie folk rock to The Cabin stage

With a calmer than normal sound, Reservoir took the stage at the Cabin Friday night 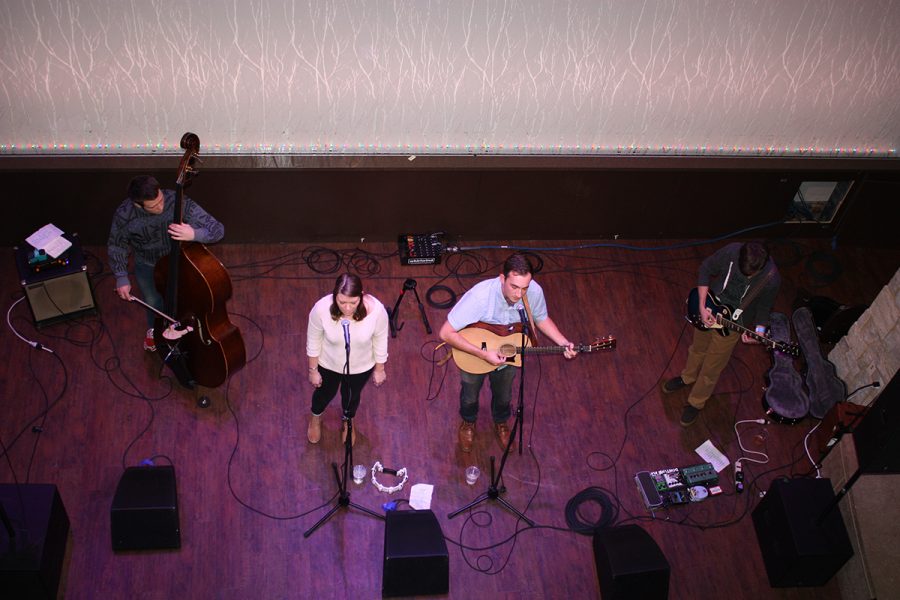 Local indie folk-rock band Reservoir brought their original singer/songwriter style melodies to The Cabin Friday night. According to their website, the self-professed “discoverers of sound, pioneers of muted melodies and instruments of a greater Creator” are based in Eau Claire and play at venues all over the city.

UW-Eau Claire graduate Carly Tebo opened for the band with a few of her own original pieces, a cover of Bon Iver’s “Blood Bank,” a cover of Z.Z. Ward’s “Till the Casket Drops” and many others.

After Tebo, Reservoir took the stage to entertain the crowd of almost 70 people. The band was down two members, but that didn’t stop them from having fun on stage, enjoying the audience and performing their expressive and original pieces.

“I think (the music) is a good mix of the two (indie folk-rock and singer/songwriter),” said Eau Claire graduate Rachael McIlquham. “I like how chill they are.”

Isaac Redinger, who graduated from Eau Claire last May, manned the acoustic guitar and sang lead vocals with Holland Kabat, who graduates at the end of this semester. Adam Terrell, another Eau Claire graduate who is now in graduate school, played the electric guitar while sophomore Levee Stadel played the upright bass.

“Each show we kind of try to mix things up to make them more exciting and to be more creative ourselves,” Redinger said.

The two missing members were pianist Mattie Khan and drummer Taylor Anderson. With the piano and drums missing from the show, the music took on a very different quality that brought a mellow atmosphere to The Cabin.

“This show was especially different,” Kabat said. “Every song was acoustic and ambient.”

During the show Redinger, one of the band’s lead vocalist and guitarist, said he got into the business of songwriting during some time off from school.

“I took a year off before college and I did some traveling,” Redinger said while introducing their piece “Hands.” He spent a year working on a farm before college and said that was where he started songwriting. “It’s a great way to relax, putting the work of the day into words,” he said.

The band has one album that was recorded at Pine Hollow Studio last January and then released last April. The album, “North,” has five of their original works on it, including “Child of the Chippewa,” “Landlocked” and “Shackles.”

Kabat said the band has another album in the works, which encompases quite a few of the songs they played at The Cabin.

If you missed the event, Reservoir’s next concert is set for Dec. 23 at the Lakely Restaurant and Bar in the Oxbow Hotel. Along with hearing them live, you can purchase their album “North” here.