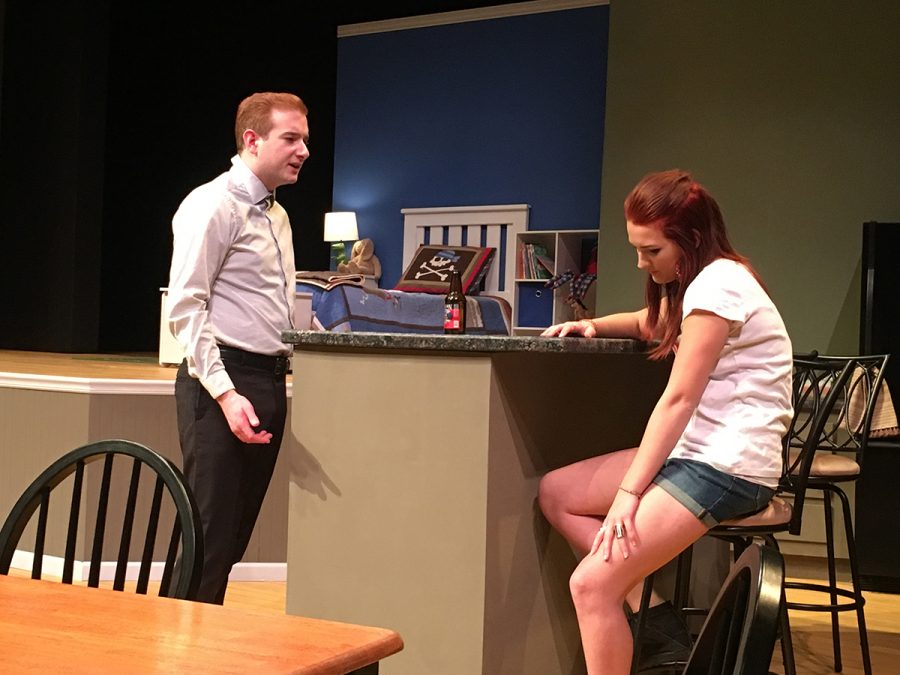 There’s a distinguishing moment in life when unexpected tragedy strikes.

We carry this grief with us, day in and day out, like a hefty brick weighing heavy in our pocket. The load doesn’t get lighter, but there comes a day where the weight seems slightly less noticeable, if only for a moment.

UW-Eau Claire’s theatre production of “Rabbit Hole” by David Lindsay-Abaire reminds us that the healing process of grief is different for everyone. The unimaginable heartbreak of a mother who loses a son differs from the grief of the father, sister or grandmother. The way in which we deal with death is intimately reliant on our own selves and the way in which we see the world.

When the couple’s son Danny dies at the unbearably young age of four by the hands of teenage driver Jason (Mike Brown), their life begins to crumble around them. While Howie finds comfort in seeing Danny’s handmade pictures on the fridge and his fingerprints on glasses, Becca thinks the only way to move on is to rid herself of Danny’s memories because constantly reliving the past is too painful for her.

Eight months after the accident, the couple and their family continue their mourning with no end in sight. When Becca learns that her sister Izzy (Sidney Fairbrother) is pregnant, she struggles between happiness for her sister and remorse for her son.

Becca’s mother Nat (McKenna Barker) tries to comfort her daughter by reminding her that she knows what she’s going through, as Nat’s son and Becca’s brother also died due to a heroin overdose. Even though Nat seems to think the two deaths are relatable, Becca becomes frustrated when her mom compares her brother’s careless drug overdose with the utterly tragic accident involving her son.

The differences in the way in which the family grieves becomes the climax of this truthful depiction of bereavement. At a time when family should take the sting away from the excruciating pangs of grief, this dynamic is detrimental to each person’s healing process.

But when Jason writes a letter to Becca saying he wants to meet with her in person and explains that he has published a comic book called “Rabbit Hole” in memory of Danny, Becca finds solace in anticipation of meeting Jason and finding closure.

Becca also finds comfort in the theme of Jason’s book, which depicts a world of parallel universes. Becca believes that if these other universes do in fact exist, there must be a world where Danny is alive and Becca is happy.

Themes presented throughout the play were beautifully characterized by the five-person cast. Strothenke effortlessly portrayed the difficult role of a mother in mourning. Strothenke and McMenomy were the perfect duo, feeding off each other’s energy and flawlessly depicting bereft parents. McMenomy also stayed true to his character, candidly conveying the sense of a father’s loss.

Fairbrother, Barker and Brown also contributed to creating a world that is relatable for some and unthinkable for others. Fairbrother and Barker gracefully crafted a realistic mother-daughter dynamic while Brown displayed regret for his character’s actions throughout the show.

Each cast member played an integral role in constructing a world in which unimaginable loss becomes reality. The fictitious world of “Rabbit Hole” became reality for the audience, one in which anguish and hope are distinct but intertwined in the wearisome journey of finding a shred of light in the midst of darkness.