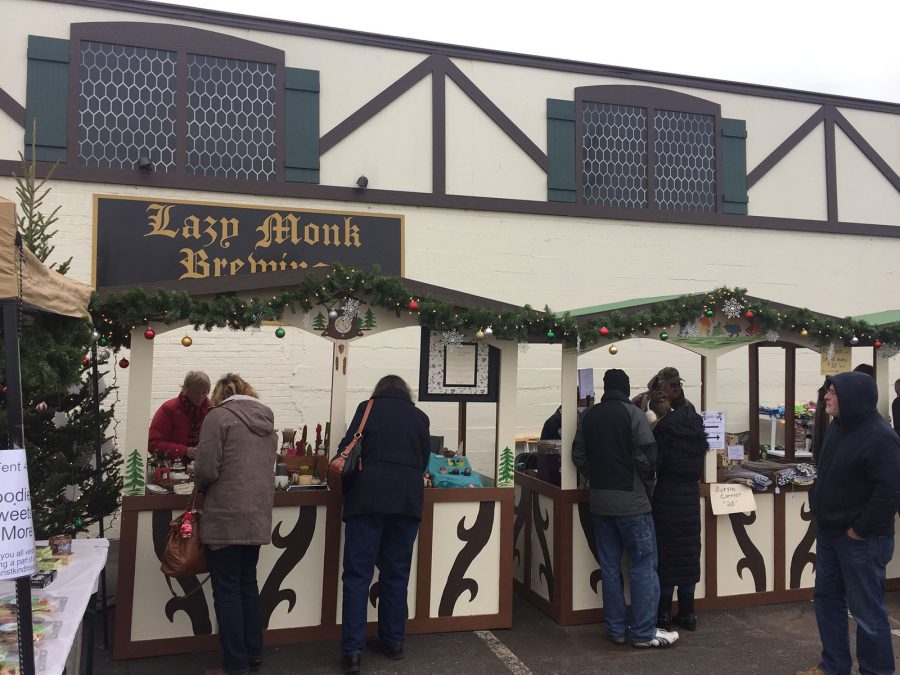 From Finnish pierogies to homemade soaps and candles to German brats, Eau Claire mimicked a Christmas market similar to one that could be found in Europe on Saturday outside Lazy Monks Brewing on West Madison Street.

This year was Eau Claire’s first Christkindlmarkt. Coordinators Jenny Bertelsen and Theresa Frank said they decided to incorporate German traditions to bring something different to the Chippewa Valley and to get people in the spirit of the holidays.

“We would like to bring something unique to the Eau Claire community and allow an opportunity for local artisans to showcase their talents, skills and products to all of our patrons,” Frank said.

This event has 10 beautifully handcrafted structures — or mini-houses, as Frank likes to call them — lined up along Oxford Street outside of Lazy Monks Brewing, each representing an old European look where the local venders can set up and sell their goodies.

“In addition to focusing on local goods, we are trying to create a spirit of community,” Frank said. “It is about interaction and talking to your neighbors, and about knowing who you are buying items from.”

Twenty local vendors decided to participate in this holiday event, each showcasing their own unique and festive products.

Krister Paakkonen, a vendor of Swedish descent, sold Finnish pieorgies, or filled dumplings, made from his mother and sister’s traditional family recipe. He has been selling pierogies for three years, predominantly at the Eau Claire farmers market at Phoenix Park. Since he has done some sampling for Lazy Monk Brewing, he was invited to sell his snacks at Christkindlmarkt.

“They (Lazy Monk Brewing) reached out to me because I have an actual European product so they wanted me here,” Paakkonen said. “It’s kind of an overlap too because the cheese I make is used in Germany so it’s exactly familiar to Germans as well, so it’s like a perfect match.”

Stephanie Schneider, another vender, works for Together Farms located in Mondovi, Wisconsin. She sold meat such as beef, lamb and pork that she raised organically with no MSG or other chemicals.

Schneider also makes homemade soap and lip balm from the lard of the pigs, which were also sold at the market.

UW-Eau Claire sophomore and communication sciences and disorders student Elizabeth Alessi said she heard about Christkindlmarkt through Facebook and decided to check it out.  She said she enjoyed the homemade Christmas ornament stand as well as Scheider’s homemade soaps.

“I thought the market was really cute and fun,” Alessi said. “It was a great way for local venders to sell their products and it seemed like everyone was enjoying the festivities.”

Frank and Bertelsen were pleasantly surprised with the crowd turnout for the opening weekend.

“We advertised pretty much just through Facebook and through word of mouth,” Bertelsen said. “I think some of our vendors have actually sold out of some of the things they have brought.”

Frank also hopes to continue this market as an annual event.

“We are hoping to bring that warm fuzzy feeling of Christmas into the hearts of our patrons as they have an opportunity to shop and socialize with the vendors in our community,” Frank said.

Christkindlmarkt will continue for the next two weekends in December. Be sure to catch this holiday market Dec. 10 and 17 from 12-5 p.m. at Lazy Monk Brewing.