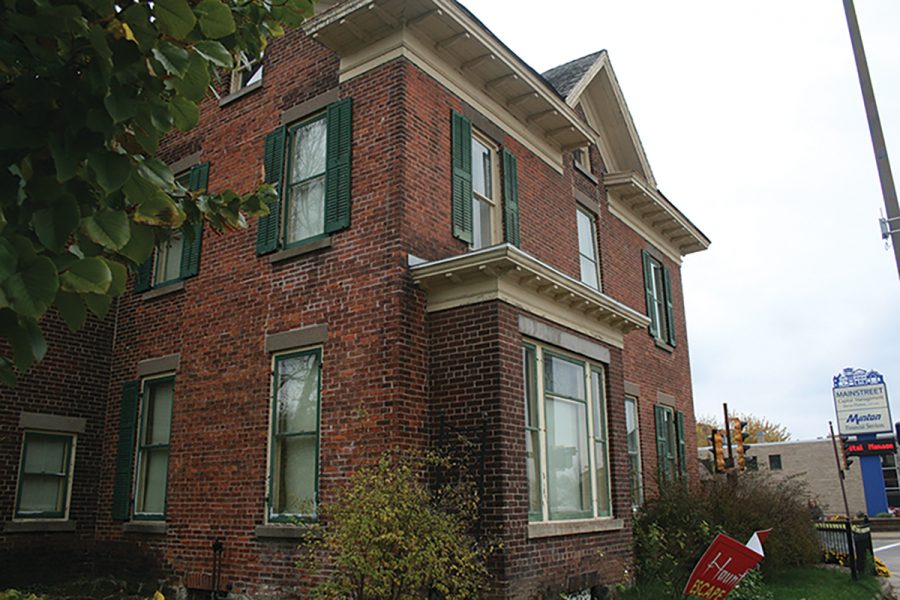 The Schlegelmilch House is Eau Claire’s first house made of brick, one year before Eau Claire became a city in 1871. One room has been transformed into an escape room during the month of October. It will be open until Nov. 6.

At the top of the stairs, eyes watch you. From the corner of your eye, fog approaches, emanating chills from your body. Before you know it, someone (or something) taps on your shoulder.

This sounds like a haunted house, but it’s something even more mysterious.

This Halloween season, the Tactical Escape 101 escape room in the Schlegelmilch House invites daring souls for an hour of mystery solving.

The Schlegelmilch House is Eau Claire’s first brick building made in 1871. According to the Chippewa Valley Museum website, it was built by Herman and Augusta Schlegelmilch with brick in hopes to save themselves from fire. Eau Claire’s active logging industry brought much sawdust into the area, provoking fires in houses made of other materials.

Currently, the house is open for tours courtesy of the Chippewa Valley Museum. However, the museum has been struggling with the economy, so Justin and Jennifer Fonfara of Tactical Escape 101 decided to partner with the organization.

“It is such a beautiful old house and the partnership has been so wonderful,” Jennifer Fonfara said. “They (the Chippewa Valley Museum) have worked so well with us.”

A portion of the proceeds from the escape room held in the Schlegelmilch House will go to the Chippewa Valley Museum.

Jennifer Fonfara said October is usually one of the slower months for the business owners, so they were unsure if they wanted to make an escape room in the house. However, as soon as she saw the kitchen, she knew it was must.

The Chippewa Valley Museum also has many other properties around Eau Claire, Jennifer Fonfara said. When the couple heard the museum was struggling financially, they decided to partner with them during the Halloween season.

Solving a room’s puzzle takes creativity and critical thinking skills. Keys are hidden around the room, which is about the size of a living room. There were three windows, a table in the center of the room and several boxes with different kinds of locks, such as combination locks, key locks and even a lock that would only be opened with a magical phrase. Numbers corresponded with different letters and lead to opening the locks located around the room.

The final lock was the safe and only three tries are allowed to open it.

The room is appropriately Halloween themed, ornamented with fake spiders, rats, bats and scorpions. A fog machine adds to the eeriness of the room.

One hour is given to solve the room. In the Schlegelmilch House, the goal is to find Mrs. Schlegelmilch’s fortune.

Do you have what it takes? Once your group is ready to take on this adventure, make your reservation in the Schlegelmilch House, located at 517 S. Farwell St. Groups as small as two people and up to 12 are allowed per attempt.

The escape room will be open until Nov. 6 and costs $30 per person. UW-Eau Claire and CVTC students are able to do the escape room for a reduced price $15 Monday through Friday.