Poliça and Stargaze’s ‘Music for the Long Emergency’ in review 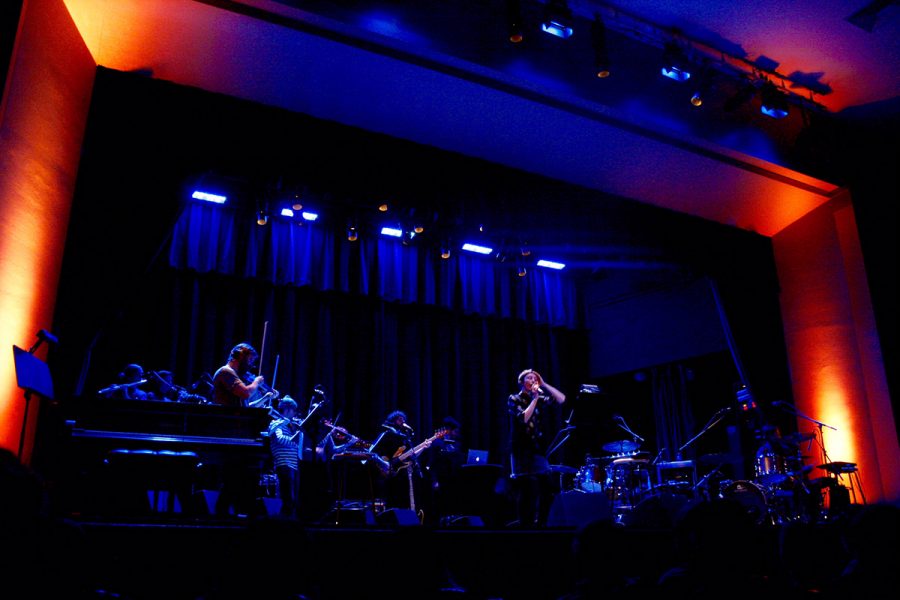 Poliça and Stargaze performed the culmination of two years of collaboration, their project titled “Music for the Long Emergency,” for the second time ever to a small crowd Saturday at Schofield Auditorium.

It starts with a computerized beat, ominous and mysterious, steadily hastening. A single soul stands onstage, standing in the glow of his “instrument” — a computer screen.

A piano joins — one note played over and over. Then a violin, then two. The stage is lit bright blue, yet it’s so dark the audience only sees bodies, silhouetted by the light, and the instruments that accompany them. In an instant, the stage becomes pink.

A flute and two violas join the mix. A french horn. Then a voice, barely discernible, distorted by synth. Drummers and guitar players join the mix to create a complex layering of sounds.

As the sounds intertwined and combined, what emerged was music — music unlike anything I’d ever heard before.

Together, the group performed their project titled “Music for the Long Emergency,” which they’ve been working on for the last two years. The set is inspired by the novel “The Long Emergency” by James Howard Knustler, which delves into how earthly reliance on cheap oil will ultimately incite worldwide doom.

“Anyone who is awake on this earth can feel the days and nights are full of emergencies,” Poliça vocalist Channy Leaneagh said in an email to the Star Tribune, explaining their inspiration behind the project.

This stop was not Poliça’s first in Eau Claire, having previously performed at the first Eaux Claires Music Festival in July 2015.

“We’re really excited to be here,” Leaneagh told the crowd after their first song.

For Stargaze, the concert marked only their second time performing in the United States, and their last before heading back to Berlin.

“We’re honored to be making music with them (Stargaze),” Leaneagh said. “We’re sad to see them go, but we know we’ll be together again soon. This is an exciting time, and we hope there are exciting things going on in your lives, too.”

The melodic, sometimes sweet, sometimes dramatic, music was filled with clashing texturing and dissonance to create a variety of sounds that were unconventional but somehow fit together.

The smallest layers, like a single violinist striking his bow to his violin, made all the difference. That piece in the puzzle, and many other seemingly minute details similar to that, made the show what it was — a true existential experience that had me deep in thought for its entirety. The performance left me stupefied, walking out of the auditorium wondering what in the world had just happened to me within the span of a two-hour concert (in the best way possible).

Sometimes Leaneagh’s rich, silky yet somehow pure voice (often distorted by synth effects and hard to understand) was the main event; sometimes it was the orchestra that really stole the show.

No matter who was “leading” the moment, emotions were palpable across the stage. They seemed to move and emote as a singular body while playing together. It was like these two groups, wholly unlike one another, were meant to play together.

In one of the few times Leaneagh addressed the crowd between songs, she acknowledged how hard her voice can be to understand.

“People say they can’t understand me when I sing,” she said, “but let’s see if you can understand the marvels in my mouth.”

Although we didn’t hear much from Leaneagh or any of the other performers during the concert, it was fitting, the music truly speaking for itself. Without many interruptions, the audience was able to focus on the music for what it was.

Each song contrasted the one before it — in vibe, vocals and instrumentation. Still, it all seemed to fit together.

The Eau Claire music scene made their way to the show with local electronic artist Feng Meng Vue, who releases music under the name sloslylove, opening the show for the first 40 minutes. Minneapolis-based rap artist Kill the Vultures joined in for a song at the end, making for the perfect collision of synth pop, orchestra and rap.

The biggest detraction from the concert was the venue itself — electronic synthpop converged with orchestral music did not fit Schofield Auditorium, no matter how many times I told myself to ignore it.

On the other hand, the half-full auditorium did provide the intimate setting that was necessary for a performance of this nature.

Closing with the title song of their project, Leaneagh tried to describe the song and all it means to her, but then she abruptly stopped.

“I’m just going to let this song do it’s thing,” she said, deciding to let the haunting song speak for itself.

And that it did.

The musicians, one by one, made their way offstage while the somber yet resolved final notes hung in the air, leaving the audience in a trance for two silent seconds before a rousing applause and a standing ovation broke out.