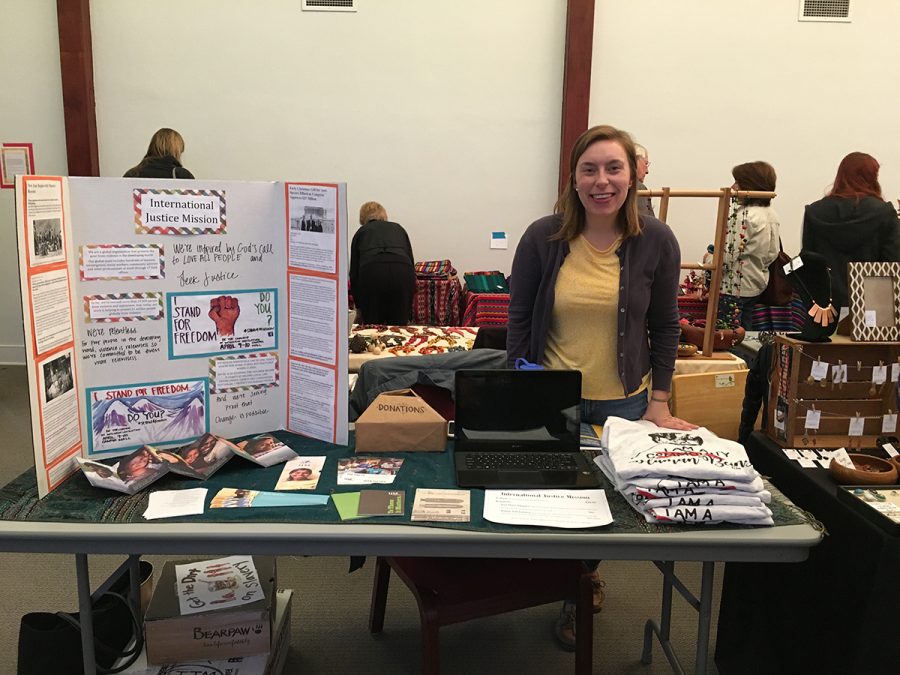 Local vendors flaunted unique, handcrafted gifts in hopes of raising awareness and supporting the artisans who produce the products.

The Global Market emphasizes the importance of fair trade and wages for artisans from Guatemala to Ecuador to Haiti and various countries in Africa.

The proceeds from this event go to local artisans as well as other efforts that combat poor wages and outsourcing, which has left these artisans in an economic stronghold.

One-of-a-kind jewelry, clothes, accessories, household and kitchen items and an assortment of art and gourmet sweets were sold at fair trade prices.

Navigating through the maze of vendors and a crowd of earnest shoppers, wonderfully vibrant colors and patterns of uniquely crafted jewelry stood out. Each item had its own story, from the hands of producers to Eau Claire community members.

25 vendors attended the event, each with its own cause and mission.

International Justice Mission (IJM) is a nonprofit organization based in Washington, D.C. with field offices all over the world as well as campus chapters at UW-Eau Claire.

Senior psychology student Emily Lorentz is the president of IMJ. She said their motto is to help countries combat injustices such as human trafficking.

The organization partners with Fierce Freedom, an organization based in Altoona, to fight against human trafficking in the Chippewa Valley.

IJM strives to fight injustices at home and abroad and is the largest anti-slavery organization in the world, Lorentz said. The proceeds from selling T-shirts at this event and donations via their online catalog will go to international, national and local efforts to bring awareness and justice to victims of human trafficking.

“Our dollar is our vote,” Lorentz said. “Our purchasing power is so influential. When you chose to support a fair trade company that is ethically sourcing their materials, you’re helping give life to people.”

Lorentz hopes her efforts in supporting these and other issues will bring awareness to the Chippewa Valley in the collective effort to validate the inherent dignity of all human beings.

Shanti Freitas, Eau Claire Intercultural Emergence Coordinator and co-owner of Amazon Jungle Jewelry, said the high turnout Saturday reflects the demand for fair trade products in Eau Claire. When people are able to talk with the vendors, hear the artisans’ stories and understand the causes they are supporting, they connect with the products they buy.

“There’s people with good hearts here, who understand and are willing to pay more because they know they are helping people and the money is going directly back to the people that make (the product),” Freitas said.

Freitas and her husband travel to Ecuador once a year to buy local resources and materials in order to make their jewelry at home in Eau Claire. The couple pays fair trade prices for these sources directly from Ecuadorian artisans, eliminating the middleman and putting more money in the pockets of the workers.

Although fair trade is a sustainable solution which benefits everyone, this model has not fared well in the United States. Since people demand cheap items, such as gasoline or clothes, workers at the bottom are often exploited.

The prices at the Global Market were a bit high but that’s because much more is going to the people who make the products, Freitas said.

With the holidays fast approaching, it’s important to be aware of the products you purchase and how much of the profit goes to the producer.

It’s also important to give a little extra to those who might have nothing.

A sense of altruistic benevolence was personified by each vendor, notably Carrie Kemp of Kairos Pastoral Ministries, who exemplified a selfless nature by selling products made by Mayan women in the northern highlands of Guatemala.

When Kemp’s children adopted two Mayan children of their own, they decided to learn as much as they could about the culture, so they made the trek to Guatemala. Since then, Kemp and her family travel to Guatemala once a year to buy handmade items crafted by Mayan women.

By happenstance, Kemp and her family discovered a cause near and dear to their hearts.

The non-profit organization Mayan Hands (which Kemp supports with portions of her profits) began in 2011 to help Mayan women learn how to make pine needle baskets. These women were malnourished and had nowhere to go to sell their weavings because there was no market beyond their small village.

Since these women learned the trade of making pine needle baskets and other products such as scarves and tablecloths, the village has quadrupled in size and now has access to clean water and education, Kemp said.

These beautifully woven and embroidered products enable women to take on a bigger role in the home and allow them to make a living wage.

A woman with a purpose, Kemp personified a sense of compassion that was contagious in the midst of learning, understanding and giving to others.

This is the first Global Market in Eau Claire, although the event has its roots in bigger cities such as Minneapolis. Hopefully as the holiday season nears, more and more local communities will embrace the value of fair trade prices and fair wages so that each of us may be a little better off.