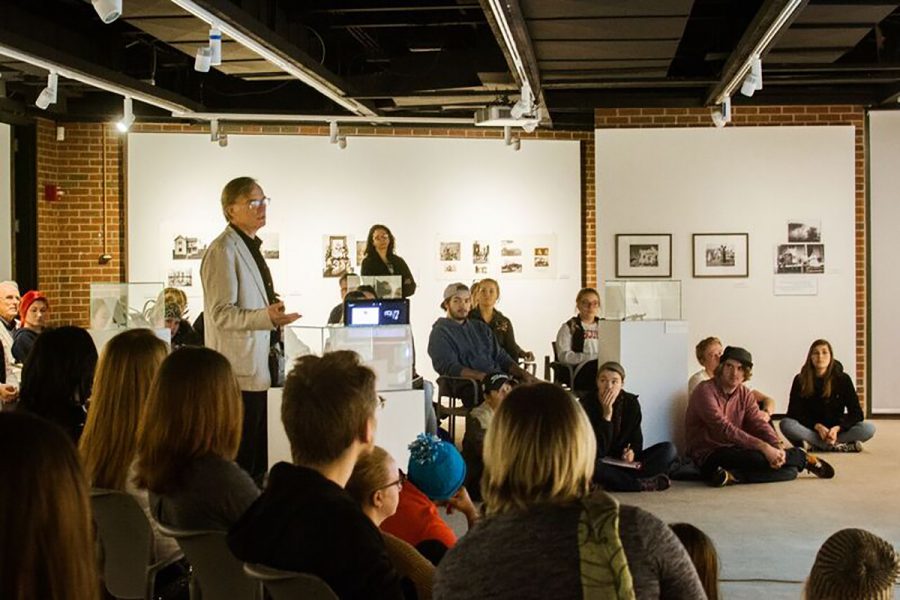 The power of photography is an elusive yet clamorous one. At its core, it is the vehicle which drives creative imagination, one that links the forgotten past with the fleeting moment of the present.

In the first simultaneous exhibition series, the Foster Gallery showcases photography bridging the gap between past and present.

“The Archive as a River: Paul Vanderbilt and Photography” offers poetic insight into the mind of photographer and archivist Paul Vanderbilt while “‘Fauxtography’ – Real Photos, Fake Stories, and the Intersection of Fact and Fiction” features real photographs with fictitious vignettes in an effort to unmask the creative liberties associated in assigning fake stories to real people.

Both exhibitions feature 19th and 20th century photography from Wisconsin. While “The Archive as a River” features Vanderbilt’s photography and poetry, “Fauxtography” exhibits photographs by Daniel Nelson and Charles van Schaick coupled with fabricated vignettes written by B.J. Hollars.

To kick off these new exhibitions, the Foster Gallery is hosting two Gallery Talks in an effort to illustrate the purpose of the photography collections, both singularly and as a whole.

Last Friday, “The Archive as a River” Gallery Talk featured guest speaker Andy Kraushaar, the visual material curator at the Wisconsin Historical Society in Madison, who explained Vanderbilt’s passion for photography and this collection through Vanderbilt’s own words. From 10-11 a.m. this Friday, Nov. 11 in the Foster Gallery, another Gallery Talk for “Fauxtography” will take place featuring curators Greg Kochen, Jyl Kelley and Hollars.

“The Archive as a River” Gallery Talk provided context for the photographs on display. To emphasize Vanderbilt’s elegant way of speaking about his collections, Kraushaar read an excerpt from Vanderbilt’s lecture on a single collection exhibited in the gallery. To listen to Vanderbilt’s words in conjunction with the photographs gave a chilling sense that he was there, telling stories of years past with poetic refinement.

Vanderbilt was a curator, photographer, archivist and librarian. From 1942-1945, he worked with Roy Stryker at the Library of Congress classifying hundreds of thousands of photographs of tenant farmers and farm workers commissioned by the Farm Security Administration. Almost a decade later, Vanderbilt was hired by the Wisconsin Historical Society to curate and organize a collection of photographs now known as the Iconographic Collections. Today, this collection “remains one of the gems of American cultural history,” Kraushaar said.

It was purposeful for Vanderbilt not to include any contextual information – such as names, dates or places – with the photographs. He would instead explain some of this information through his interpretations, which he shared intimately with small groups who viewed the panels.

In Vanderbilt’s words, “the essential purpose is to place loose photographs in a collection structure. It is not to create or deduce meaning. It is use the photograph’s vocabulary itself… in such a way as to facilitate and suggest contemplation and cognition about meaning.”

While Vanderbilt’s photography focuses on the unique pairing of photographs with poetic text in an effort to interpret thematic panels, “Fauxtography” pairs pictures with fiction, creating an alternative narrative separate from the historical context of the photograph, Kochen said.

The idea of taking images and creating stories for them was what inspired Kelley to become a co-curator for this project. She said when you add context to photographs, it opens your mind and allows you to imagine who these people were, what their story was and how they’re not all that different from us today.

“It helps people bridge the gap between past and present,” Kelley said. “It allows people to open their minds to imagining something new about photography.”

Moving across disciplines – from library archives to English to photography – is also an important part of a liberal arts education, Kelley said. It broadens your thinking and forces you to take information from different disciplines and integrate them together.

Both exhibitions challenge gallery-goers to take a different look at the photographs, to stop and stare for awhile and look for something extraordinary in a seemingly ordinary picture. The point is to take a step back and look through the lens of the camera rather than at the canvas on the wall.

While “Archive as a River” is based on some historical evidence, “Fauxtography” is entirely fictional. The fictitious nature of this exhibition in particular challenges the notion that a photograph tells one truthful, unambiguous story.

“We tend to think of photography as eminence, or as a very truthful reproduction of what’s in front of the camera,” Kelley said. “People believe what they see. So the idea of taking photographs and creating a whole new story for them that didn’t really exist… it really makes you question the medium of photography and the truthfulness of it.”

The vignettes written by Hollars are showcased side by side with the photographs in the gallery but there is also an option to listen to the stories via smartphone or on their website.