Featured artist Whosah at the Cabin

Indie-rock band from Minneapolis delivers a fun and upbeat performance 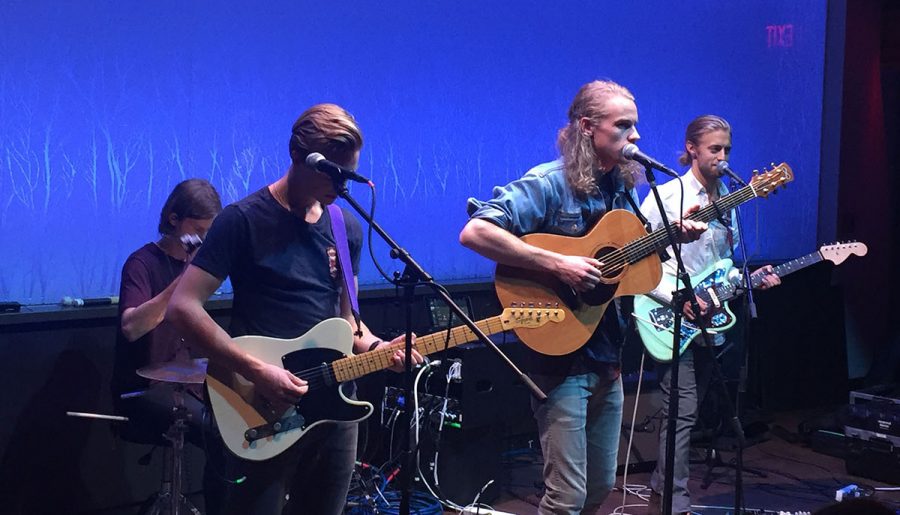 Indie-rock band Whosah hit the stage at the Cabin on Saturday night.

Audience members who made their way to The Cabin Friday or Saturday night saw the featured band Whosah perform. The coffee shop was filled with nearly 50 smiling faces on Saturday night when the band of four guys sang their hearts out.

Whosah engaged and connected with the audience. Throughout the show, they encouraged everyone to dance and sing along if they knew the lyrics.

They even split the audience in half, dividing the room, in order to have a friendly competition to see which side could sing louder.

The band played a medley of songs ranging from upbeat tunes, acoustic originals and famous covers. Some of the popular covers they played were Toploader’s “Dancing in the Moonlight,” Fountain of Wayne’s “Stacy’s Mom,” Smashmouth’s “All-star,” Justin Bieber’s “Baby” and even Village People’s “YMCA.”

The band said they enjoy sharing the music they write.

“We really just want to make art that’s new,” Spencer said. “If its been heard before then it’s not interesting for us.”

Whosah played one of their more popular songs titled “Forget About It” during the first half of the show. Spencer said he and the rest of the band think this song can help relate to college students.

The song says if you have reached a low point in your life and you wonder why you are doing something or wondering what the point of it all is, that you need to remind yourself if you love doing something then it’s worth it.

“Part of the magic and why I keep (playing music) is because I don’t really know why I do, but I just love it,” Erdahl said.

Whosah wanted to leave a lasting impression to show their fans how important and appreciated they are. The band members did not hesitate to go into the audience during intermission and talk to people and thank them for coming to the show.

“We want other people to recognize that they are valuable and to look at the things they are doing and the way they are living and be intentional about it,” Spencer said. “By sharing our stories, we hope we can convince other people that they matter.”

Spencer said Eau Claire knows how to show their appreciation of music and he was pleasantly surprised to see such a big crowd both Friday and Saturday night.

“They remind me of the ‘alternative buzz’ playlist on Spotify and I really like their music,” Glasow said.

Freshman elementary education student Arielle Strum also shared her thoughts on her experience of the night.

“It’s really cool that they (the university) have music come to The Cabin because it’s something different and fun to do on a Saturday night,” Strum said.

Whosah’s newest album came out in March of 2016 and their music can be found on Spotify and iTunes.