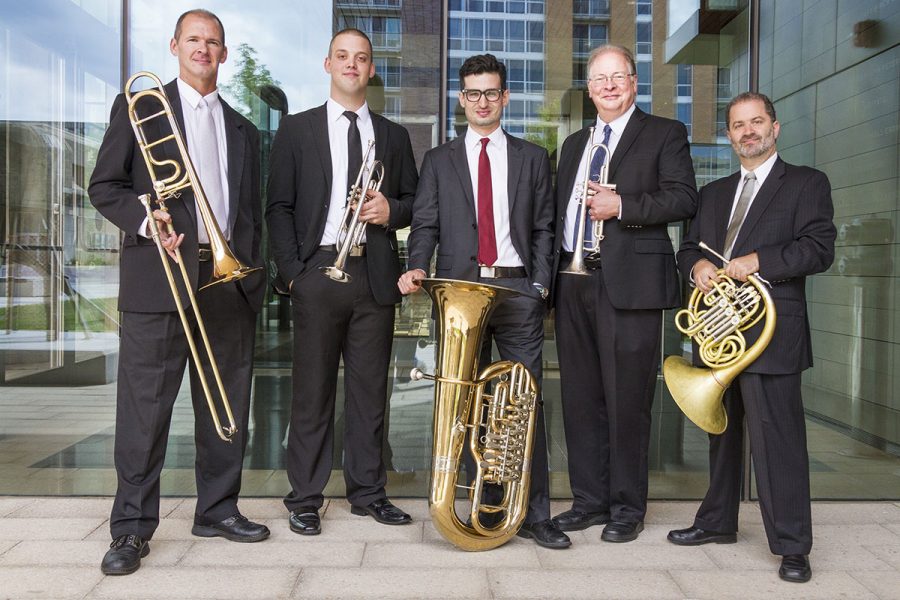 Each of the members of the Wisconsin Brass Quintet pose with their instruments.

In the chairs are the five members of the Wisconsin Brass Quintet playing a variety of pieces.

WBQ was founded in 1972 and consists of “musicians whose careers have demonstrated a vital interest in brass chamber music,” according to the quintet’s Facebook page. The quintet is just one of three faculty chamber ensembles in-residence at UW-Madison’s Mead Witter School of Music.

WBQ includes trumpet players John Aley and Matthew Onstad, trombone player Mark Hetzler, horn player Daniel Grabois and tuba player Tom Curry. Each of the members are professors at UW-Madison except for Onstad, who is a graduate student.

The group always has a graduate student play the second trumpet and Curry said they are honored to have Onstad playing with them.

The quintet performs throughout the Midwest as well as nationally and just began a brief tour in Wisconsin.

“We’re very pleased to be kicking off our mini-tour here in Eau Claire,” Curry said.

The performance consisted of eight different pieces, ranging from a piece written in 1603 (“A un giro sol” by Claudio Monteverdi) to a piece written as recently as 2009 (“Elegy” by Liza White).

The group mentioned they enjoy playing songs from the romantic era, such as “Langsamer Satz,” which was composed by Anton Webern in 1905 and later arranged by Hetzler.

“We had a good time working on the piece,” Hetzler said.

The group also performed “Laudes” by Jan Bach, which contained four separate movements. One of the movements, titled “Scherzo,” was muted and quick, which was unusual for brass at the time, Grabois said.

Each of the pieces began and ended differently than the one before. Some began soft, some loud. Some were slow and suspenseful while others were upbeat and animated.

Sophomore music education student Derek Fritz came to the show to see Curry play the tuba because he considers him to be the best tuba player in the state. Fritz’s favorite part was when the group performed a piece originally meant for string instruments, he said.