‘The Last Five Years’ in review 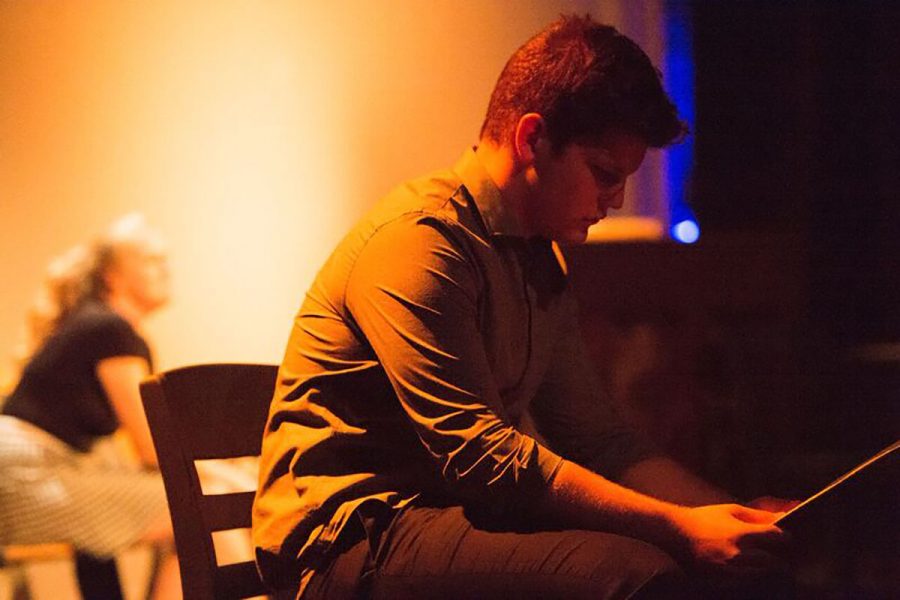 Muted hues of soft purple and midnight blue dance across the shadow of the wall as chords of piano strings break the uneasy stillness reverberating within the small, intimate space.

White light illuminates the face of a single actor on stage, her somber pose and sober half-smile tells a story of its own as her burgundy lips dance with secrets of years past.

With breathtaking honesty, she dissects the autopsy of her failed marriage, recounting the last five years of her relationship in mixed-tandem with her ex-husband.

Although there was only one bitter end to this affair, there’s always two sides to every story.

Last weekend the UW-Eau Claire Players hosted the nearly sold out performance of “The Last Five Years” in Kjer Theatre, directed by Cory McMenomy and originally written by Jason Robert Brown. This touching musical was packed with love, betrayal, happiness and loss, taking the audience on a roller coaster ride of emotions that will not be soon forgotten.

Cathy (Bridget Cushman) is an actor struggling to find her niche. Her fruitless career is juxtaposed with that of her husband’s, Jamie (Jacob Hilton), who is riding high on the success of his own pursuit as an author. These twenty-somethings engage in a riveting, nearly all-sung he said-she said rendition of the dissolution of their five year marriage.

While Cathy tells her story from end to beginning, Jamie tells his from beginning to end, forcing the audience to make assumptions and fill in the gaps until the entire picture is filled in, followed by that all-too-satisfying “ah-ha!” moment at the end.

The show begins with Cathy narrating how hurt and betrayed she felt by Jamie, leaving little room for the audience to feel any sympathy toward Jamie. Since Cathy begins with the end of their marriage and Jamie starts at the beginning, it’s easy to make assumptions of how awful of a person Jamie must be, but once the gaps are filled in, it’s easy to see how hurt Jamie is too.

The feeling of overwhelming joy felt when you first meet someone you love is accentuated in the first few songs Jamie sings. These very real and raw emotions are relatable to everyone on some level, which is perhaps why it resonates so deeply with the audience.

This sense of thrilling exhilaration is juxtaposed repeatedly with the bitter taste of complete loss of the person you love.

Jamie wants Cathy to be apart of his success, but he refuses to lose only because Cathy cannot win. Despite his own faults, Jamie reiterates time and time again how much he loves his wife, but he also feels trapped because she doesn’t want any part in his success.

Hilton and Cushman made for a fantastic duo on stage, capturing the uphill battle of a crumbling marriage with sincere honesty. Their chemistry was apparent and their connection almost real. The two cast members played on each other’s emotions and remained in tandem throughout the entire show.

Hilton, a freshman, made his first theatre debut a dazzling display of a thoughtfully crafted character who tells his story with chilling passion. His portrayal of Jamie was an excellent mix of sensational singing and honest acting. He artfully captured the lovesick bliss he felt when he first married Cathy and the lamenting end of their relationship with candidness.

Cushman was stunning from scene change to scene change, flawlessly capturing the demeanor of a woman who went from being the light of her husband’s life to a castaway. She was a beautiful spectacle throughout the night, as harsh white light glowed across her face as she flashed the perfect pose of a forsaken woman in a black dress, heels and a glass of red wine casually in her grasp.

Both Cathy and Jamie tell their story directly to the audience, breaking down the fourth wall and inviting the audience in, rather than simply watching the spectacle from the outside looking in. This repertoire between cast and audience, coupled with the intimacy of the theatre stage, allowed the audience to connect with the characters on a deeper level.

Not only was the acting sensational, but the piano accompaniment by Marilla McKay added so much raw, biting emotion that it truly set the tone for each scene. From the dismal timbre of “Still Hurting” to the jazzy, happy-go-lucky cadence of “Shiksa Goddess,” McKay played an isolated, albeit clamorous role as an accompanist.

The lighting of the production also added flair to the intimate environment of the small theatre in Kjer. A few lights strung on the wall behind the set and subdued tones of white, gray, purple and blue added sympathetic sorrow to the disheartening woes of the disintegrating relationship. At other times, bright white and yellow hues sparkled with the carefree warmth of new love.

Each aspect of the musical – from the spectacular two-person cast to the vivid lighting and dazzling music – complimented the personal narrative of falling in and out of love. The Players did an excellent job pulling together their first musical and each cast and crew member made “The Last Five Years” a performance Eau Claire won’t forget.