‘Shipwrecked!: The Amazing Adventure of Louis de Rougemont As Told By Himself,’ in review 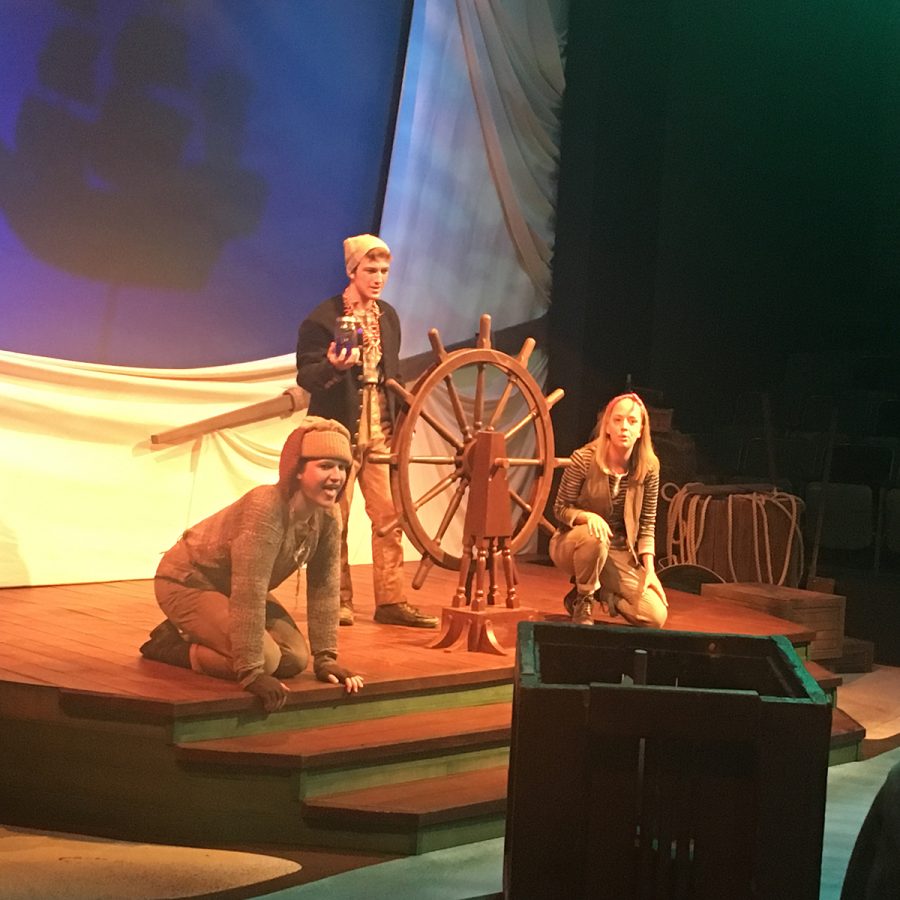 Joey Sletner, Tristen Wilkes and Emily Elliot perform in the shipwrecked scene of the Music and Theatre Department’s newest production “Shipwrecked!: The Amazing Adventure of Louis de Rougemont As Told By Himself.”

The theatre is a place where you can let yourself go and become entranced in the magic of storytelling, imposed with childlike wonder and endless imagination.

The UW-Eau Claire Music and Theatre Department paid tribute to this boundless reverie last Thursday during the opening night of “Shipwrecked!: The Amazing Adventure of Louis de Rougemont As Told By Himself,” in Riverside Theatre.

The play told the story of Louis de Rougemont, an Englishman who treks from one side of the world to the other and has some peculiar encounters along the way. After leaving home at the age of 16, Louis finds himself exactly where he has always dreamed: on a ship with a destination of no return.

Along the way, the ship wrecks and Louis finds himself stranded on a strange land, face to face with Aboriginals who mistaken him for an enemy. Eventually, friendship and camaraderie ensues and Louis remains on the blue-green island oasis for some time.

Once he returns to London, however, he finds that something terrible has happened: progress.

His life at sea contrasts so starkly with the monotonous way of London life that he decides to recount his fantastic adventures in a local magazine’s weekly installment. Almost overnight, he is an instant sensation.

But the hype is short-lived when the credibility of his stories is called into question. As for the rest of the story, you’ll have to see it to believe it.

This production was directed by the artistic director of Eau Claire theatre, Arthur Grothe, and originally written by Donald Margulies. Louis de Rougemont was a real-life character whose story took on a theatrical twist in this production.

“To me this play is really the celebration of theatre and that it should be a playground for our imagination,” Grothe said. “To allow people to take that trip and enjoy it without judgement.”

Grothe said this play will leave the audience with something to think about, leaving the full-circle ending up to the audience’s interpretation.

Characters broke down the fourth wall throughout the play, talking and interacting with the audience. Grothe enjoys this type of theatre most, he said, and this type of narrative allowed the audience to become an integral part of the show.

Subtle cues of present day media effects were also present. In today’s society people are very eager to build others up just to tear them down in the end.

“We like to debunk the fantastical things,” Grothe said. “Perhaps this play provides room to celebrate those things.”

Instead of playing the role of the cynic, this play challenged the audience to ignore the voice in their head telling them it’s a fabrication and allow themselves to instead get lost in it.

Each performer added a new layer to the bizarre life of Louis de Rougemont, as each cast member played lead roles as well as supporting roles. It was exciting to see the cast break the rules and tell the story in a different way, adding to the fact that this could be anyone’s story.

Clara Kennedy, senior theatre arts student and performer, said she has never been part of a production quite like this before.

“For this show in particular I had to let go of my limitations and adult ideas and tap into being more like a kid,” she said. “Not so much thinking of the destination, but just enjoying the journey.”

Kennedy said this childlike wonder is present in the “minimalistic” use of sound effects and props. Wine bottle fish and umbrella jellyfish were only a few of the props brilliantly used to portray an underwater scene. An effective and colorful use of lighting also created a unique ambiance, from the shadow of a ship to the dazzling hue of underwater life. Each effect added to the magic of theatre and youthful atmosphere.

This entertaining production will leave you feeling like a kid again. A show for all ages, “Shipwrecked!” will continue its performance at 7:30 p.m. Oct. 19-22 and 1:30 p.m. Oct. 23 in Riverside Theatre in Haas Fine Arts Center.