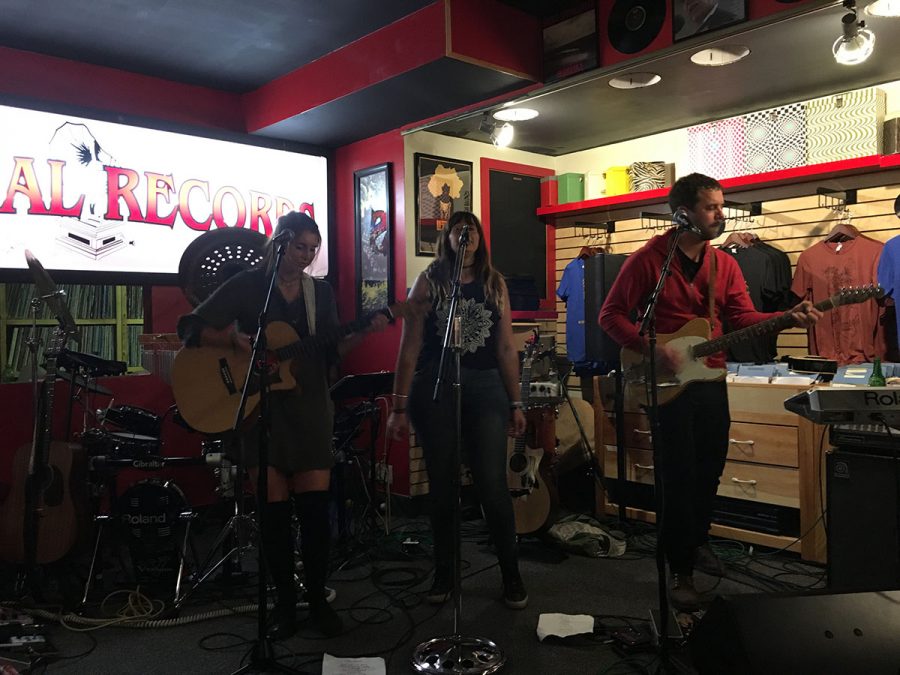 The chords of sweet melodies pierced the crisp September air as Laska’s soft but candid muse drew music fans from every direction towards the open doors of Revival Records.

Every corner of the record store was packed with those who felt compelled to listen to the release of Bon Iver’s new album, “22, A Million” last Thursday when Revival Records hosted a midnight release party featuring live performances by two local bands, Laska and We’re Wolves.

The event was preceded by a listening party the night before at the Bon Iver mural next to the state theatre on Eau Claire and South Farwell Street.

The album has been long awaited for since Bon Iver performed the album live at Eaux Claires Festival last June. This is the band’s first full length album since the release of “Bon Iver, Bon Iver” in 2011 which won Best Alternative Music Album at the 2012 Grammy Awards.

“22, A Million” is a surprise album after lead singer and Eau Claire local Justin Vernon announced he was walking away from the Bon Iver project four years ago. After taking time for himself to heal wounds of anxiety and depression, this album personifies the journey Vernon has experienced in his own life, a sound that differs in many respects from his previous works.

Billy Siegel, owner of Revival Records, said the album was different, but in a way which showcases Vernon’s artistic brilliance and creativity. From the music arrangement down to the lyrics, Siegel said this album is Vernon’s way of saying “I’m going to do what I want to do.”

“He’s pushing the envelope on what he wants to do in the music scene. This album is really going to set himself apart,” Siegel said. “As an artist myself, I totally see where he’s going. He’s trying to move forward and do what’s good for him and this album portrays that.”

The release party was a success as well, Siegal said. Groups of people came and went as the night continued, some to watch the local performers and others in anticipation of the midnight album release. Bon Iver even sent three autographed albums to the store and those who preordered were entered into a drawing to win them.

Siegel said Bon Iver and Vernon in particular have developed the Eau Claire music scene by supporting local businesses and other local artists, which has launched the development of a thriving arts community.

This support was exemplified in the two local bands who performed before the listening of the album prior to its release at midnight.

Cory Crowell, rapper and vocalist of We’re Wolves, described his band as a mix of folk, hip-hop, rock and alternative. The group, born and raised in the Chippewa Valley, performed their first album. This was only their third show together after working with the band for almost a year.

Crowell said the music scene has grown over the years, a tribute to the quality talent Eau Claire musicians and artists have to offer.

Alyssa Thoms, co-vocalist with Crowell, said the music she has heard in this area is inspiring and every show the band performs is a different experience.

“We as artists look out for each other,” Thoms said. “We always like to build each other up and I think that’s what’s great about this area.”

This support is evident in the masses of people who flocked to Revival Record’s release party.

Vernon is an exciting individual who is making waves in the music scene, Thoms said. She described the album as technically brilliant, studded with hidden messages but also prevalent and distinctive melodies.

Mariah Christiano, an Eau Claire native who has relocated to Duluth, said she drove all the way back home just to see these local bands and buy the album from the same store she bought her first record. She said she wants to cheer on her hometown whose music scene has blossomed over the years.

Decide for yourself if Bon Iver’s creative shift is the music of the future. The album is available on iTunes, Spotify and at Revival Records and other music venues.