One year in, Chippewa Valley Writer’s Guild is a ‘success’ 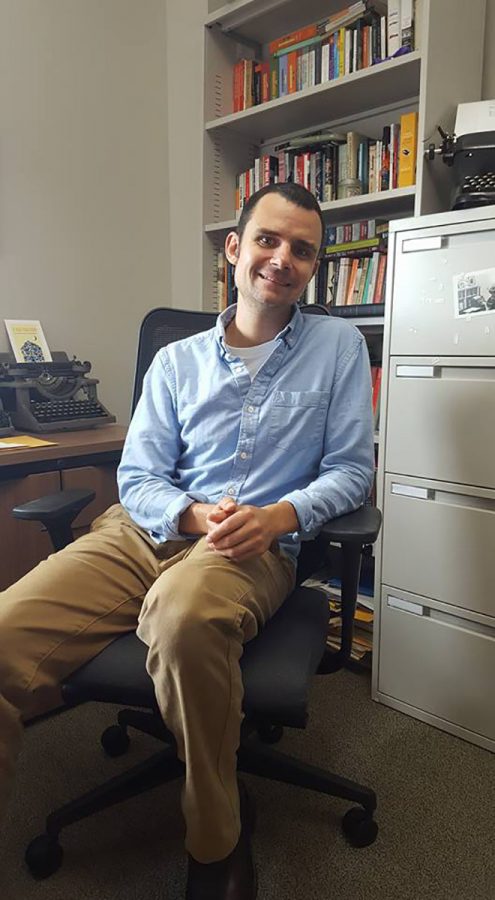 B.J. Hollars reclines in his office as he elaborates on the CVWG’s first year of success and the plans in place to build on their accomplishments.

While it may not have won over the sword, the director of the Chippewa Valley Writer’s Guild (CVWG) can look back at the first year of his organization and say the pen triumphed.

B.J. Hollars, an assistant professor of English, published author and founder of CVWG, said he envisioned the Guild as a means to build bridges between the university and community by tapping into a rich pool of talents and artistic voices in the valley.

The CVWG is a partnership between writers, university faculty, the Eau Claire Regional Arts Council and the UW-Eau Claire Foundation.

It began by creating a directory for locals to find authors and writer groups to hone their skills, and from there the concept has blossomed and continued to expand, Hollars said.

While writing is typically a “solitary pursuit,” Hollars said there is a universal draw, one that has attracted wordsmiths from all over the area. Students, bestselling authors, university faculty, poets and journalists have all come together to form a community that fosters and enriches the arts.

“Writing is a form of self-expression. If there is one thing that we all share it’s stories and the ability to tell stories,” Hollars said. “It’s one of many ways to get folks in a room with common interests and a common cause. It’s just a great way to brainstorm new ways to create a vibrant community of writers here.”

Hollars said he aims to inject a sense of inclusivity and collaboration into the events the Guild plans and hosts.

The monthly “craft talks,” writing workshops and three-day residencies are achieving this goal, evidenced by the experiences of UW-Eau Claire alumna Erin Stevens.

Stevens, a resident of Saint Louis Park, Minnesota, and a creative writing graduate who joined the Guild last year, said CVWG gives writers a sense of belonging to a community, one that is both challenging and encouraging.

“Here, you step from behind the desk, meet other writers and share critical thoughts with each other,” she said. “I love having that connection to Eau Claire. Everyone I’ve met [in the Guild] has been super nice and supportive. It was cool to learn from local writers and from the community.”

Stevens said she was able to find a niche for her diverse interests as a creative writer. She undertakes young adult fiction, flash fiction — prose pieces smaller than 800 words — and non-fiction pursuits.

The CVWG has also invited local luminaries such as bestselling author Michael Perry and former Wisconsin Poet Laureate Max Garland to sit down and discuss the craft of writing.

Kimera Way, president of the UW-Eau Claire Foundation, said backing the Writer’s Guild was a no-brainer for the university judging by the level of proven talent in its English department, let alone the untapped potential off campus.

“Anytime we get a chance to support the exciting work of our faculty, we’re going to take it,” Way said. “This one is especially valuable because it reaches out to the community. It was an easy decision.”

Hollars said the Guild will look to build upon last year’s success, although many of the particulars are still in a state of flux and the CVWG won’t be able to present a clearer schedule until details are finalized.

The Guild has two craft talks planned for the coming weeks:

— A craft talk titled “Ushering your book into the world: finding the right agent to represent your work,” will be hosted 7-8 p.m. Thursday at the Local Store and the Volume One art gallery at 205 N. Dewey St. It will feature literary agent Eric Hane of the Minneapolis-based agency Red Sofa Literary.

— A second craft talk titled “Your novel starts now: how to tackle National Novel Writing Month,” features NaNoWriMo representative Aimee Johnson, who will speak from 7-8 p.m. Thursday, Oct. 20 at the L. E. Phillips Memorial Library.
The public is invited and encouraged to attend.