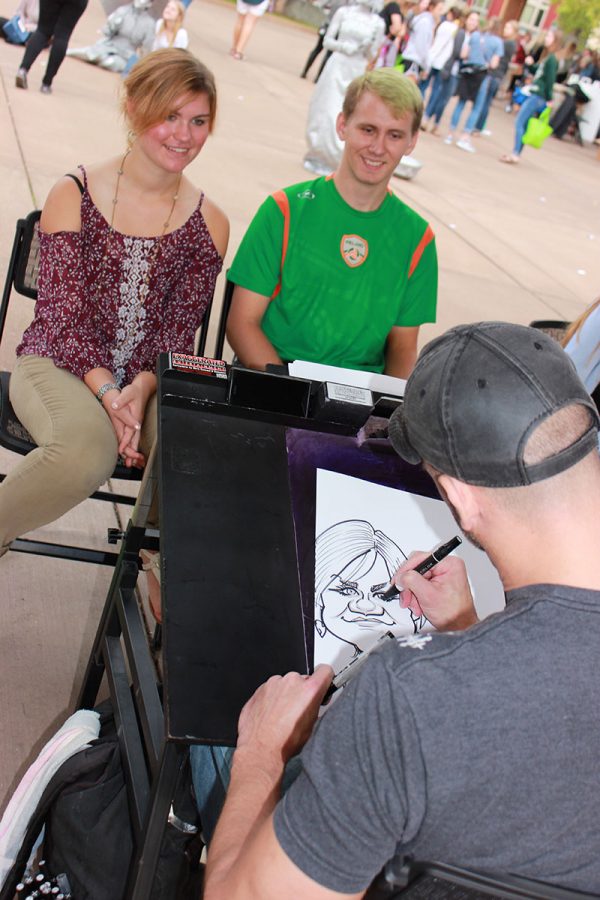 Friday, Sept. 9 was the university’s fourth annual UW meets EC, which aims to introduce students to the downtown area. From live performances by a cappella groups Audacious and The Innocent Men to around 40 businesses to explore, attendees had much to hold their attention.

In the Phoenix Park pavilion, students stopped at tables set up by local businesses such as Downtown Eau Claire, Inc., L.E. Phillips Memorial Library and Visit Eau Claire. Here they learned about the organizations and, in some cases, took home free prizes.

Farther down the line, students had the opportunity to adorn their skin with henna tattoos or have caricature artists cartoonize their faces. In addition, several therapy dogs were at the event for students to pet and interact with.

Freshman Kaitlyn Behnke said she enjoyed the event because it was her first time getting off campus and seeing the city. Behnke and her roommate spent the evening exploring the area.

“I really like this area and the music,” Behnke said. “Oh, and the dogs.”

The two collected free things, visited Tangled up in Hue and stopped to listen to performances in Phoenix Park by the featured a cappella groups.

Behnke attended several of the Blugold welcome events during the first week of school. She said the activities are great for freshman because they encourage students to do something other than sit in their dorm rooms.

Kyran Hamill, communications and promotions coordinator for Downtown Eau Claire, Inc. said this event is good for both the community and the students.

“The students definitely benefit by learning about downtown and all the exciting things that are happening here,” Hamill said. “It’s really about that exposure to what’s going on. The community benefits from that exposure and gets to see that students are interested as well. To me, it’s very symbiotic.”

Hamill said although many college-aged people don’t realize it, Phoenix Park essentially used to be a field. Around 11 years ago, the city started to transform the area into what citizens see today. Despite the addition of numerous businesses, Hamill said people can still enjoy the nature in the area.

“The natural beauty that we have down here — Phoenix park, the rivers and the trails — how could you not fall in love with it?” Hamill said.

Sophomore Megan Israel attended UW Meets EC last year as a participant. This year she served as a volunteer. Her job was to direct students who were lost or looking for a specific location. Armed with a map and a partner, she sent students on the correct path.

Much like Behnke, Israel also recalled enjoying the a cappella performances her first year. Looking back, she said this event helped her make connections as a freshman and she became closer with her current best friend after attending.

Israel said this event is important because it gets students off campus and into the city of Eau Claire.

“I feel like other college towns don’t really want the students to be there and they can feel that,” Israel said. “In Eau Claire, students get to see that the community is embracing them.”