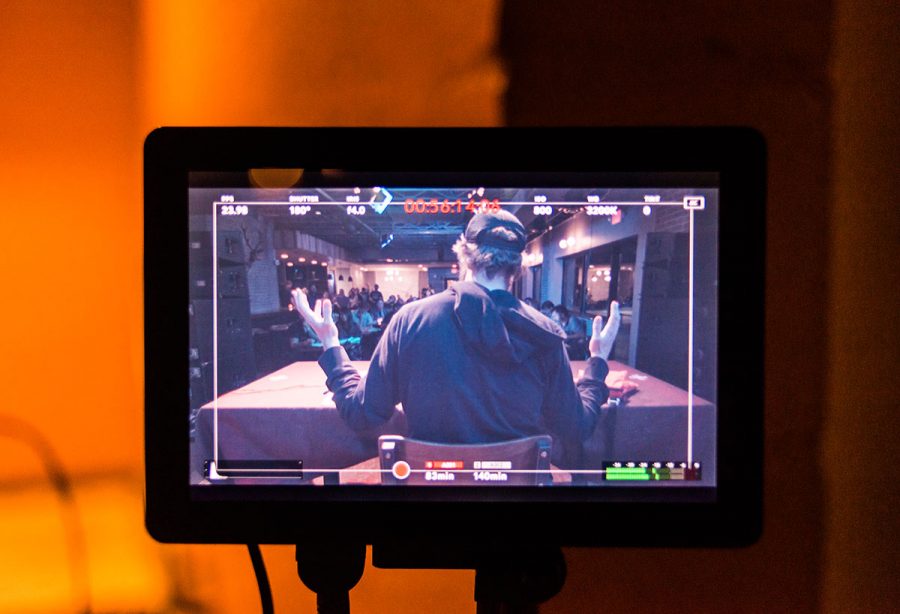 Justin Vernon addresses the questions of 27 journalists from worldwide and local media at a press conference at The Lakely Friday night.

He should’ve been elated. But he just wasn’t there. He couldn’t be there.

It was 2012, he’d seen his music turn into something much grander than he had ever imagined.

He remembered that was the kind of show that would normally invoke a sense of joy within him, along with feelings of success and fulfillment.

Instead, he broke down.

“This is embarrassing, but I got off stage …  and it was a great show — we thrashed it,” Vernon said. “It was such a good feeling and I was so not there.”

Four years after walking away from Bon Iver indefinitely, Vernon has reemerged ahead of Bon Iver’s first new album in five years, “22, A Million,” which is set to be released Sept. 30.

But this time, Vernon is doing it on his own terms.

Friday night, Vernon held a private, one-of-a-kind press conference, inviting a total of 27 journalists from all over the world, all over the country and right here in the Chippewa Valley, to the first public airing of the recorded album and an exclusive Q&A.

Rather than joining the circus of answering the same questions over and over again for different people and living his life out of a hotel room, Vernon decided to invite them to Eau Claire — but for one night only.

“I couldn’t hear myself talk that much about something like a music song, you know? There are so many things going on in the world, and these are just the songs I made,” Vernon said during the Q&A, which lasted an hour and 40 minutes.

But that’s not to say Vernon isn’t grateful for the attention his music received, or the success he saw while touring —  It just wasn’t fulfilling anymore.

“To be in demand is a wonderful thing because it means you get to do what you love for a long time,” Vernon said. “But if you just go and you’re not replenishing yourself with reasons to make music or you’re not necessarily figuring out ways to change the music you have … you burn out on that.”

Soon, he was drowning in feelings of anxiety and depression. He grew tired of touring while the band still only had 10 tracks to its name. Something had to change and until it did, he decided to take a break, traveling and living.

The moment that “22, A Million” came into focus for him, Vernon recalled, was on a solo trip to the Greek islands when he was inspired to record the first words of the album on a portable sampler, “It might be over soon.”

“It was actually a very bad time. I was trying to find myself. I did not,” Vernon said. “But I did find that I was incredibly bored and kind of panicking a lot … I felt very poor at that time.”

What emerged some five years later was an album entirely unique to anything Bon Iver had ever done, featuring a more electronic and bass heavy in sound; an album “composed of moments.”

He layered different sounds together to create something new — a jarring at times sound that Vernon said he still tried to make “beautiful.” Vernon had found a sound to fit the duality he was experiencing in his own life — the simultaneous anxiety and peace; unhappiness and joy.

“I think this sound encourages different kinds of sparks. And just putting those moments together and seeing how they coexist and making something new,” Vernon said. “If they felt new to me, it got me excited.”

Locally and internationally influenced by his experiences in the Chippewa Valley, Vernon said the album was largely recorded and produced at Vernon’s own April Base Studios near Fall Creek. Some parts of the album were also recorded in London and outside of Lisbon, Portugal.

Although most of the album came from a place of confusion, attempted and sometimes failed introspection when it came to religion and life itself for him personally, Vernon said he aimed for something more hopeful in the different sounds, textures and collaborations he utilized to craft the album.

The album reflects upon the nature of religion and sin at multiple points, inspired by his experiences at UW-Eau Claire as a religious and women’s studies student.

“I needed it to sound a little radical to feel good about putting something out in the world,” Vernon said. “For this one, there’s still some dark stuff and whatever, but I think cracking things, making things that are bombastic and exciting and also new, and mashing things together, and explosiveness and shouting more, I think that was the zone.”

But Vernon and his musical team don’t want the album to be seen as a career move, or a disruption to who everyone thought Vernon was based on his previous Bon Iver works.

“To narrow this album down to the next step within an ‘artistic career’ would be to miss a far grander purpose of this music — or any music for that matter — and the cultures of friendship that sustain us in our capacities to even play music,” Vernon’s longtime friend and collaborator, Travis Hagen, wrote in a note about the album. “Although ‘22, A Million’ emerges from a swirling context of transformation in Justin’s recent life, it is based on how we have always approached what music can be or do.”