Improv troupe brightens up The Cabin 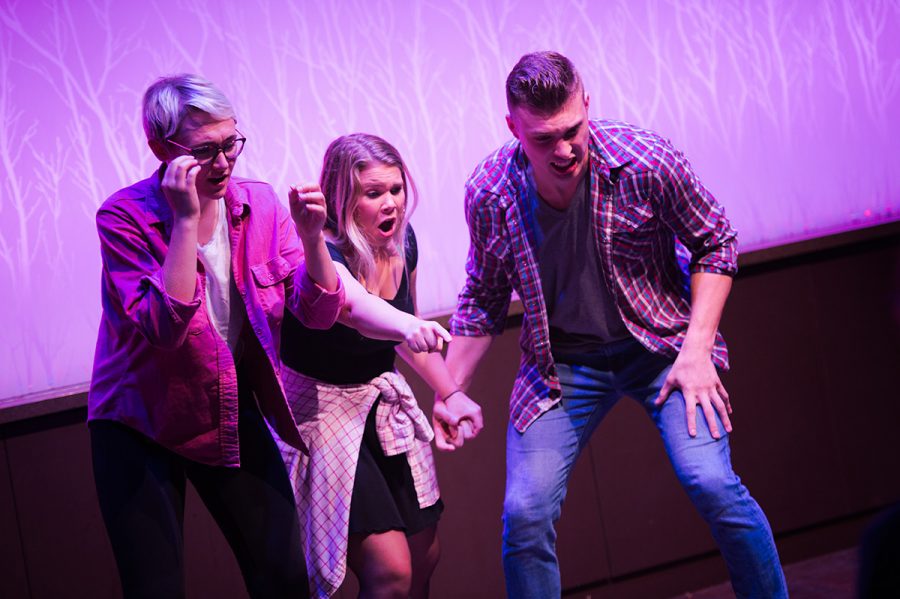 Say the first thing that comes to mind. Don’t think, just do it. Let the mind wander beyond the realm of sanity. Let go, enjoy the moment and if all else fails, be funny.

Last Thursday The Backwards Thinkers Society, an improv group with a troupe of eight members, took the stage at The Cabin.

The performance consisted of several games conducted by a moderator and acted out by members of the group. The moderator would explain the game and ask the audience for suggestions regarding location, relationship between actors or questions to ask the actors.

The intimacy of The Cabin makes for a spectacular venue because the audience becomes an integral part of the show, where actors had to react to ad-libbed suggestions and questions.

To think on the spot is essential in performing improv, as the actors have shown in their skits. The shrewd comedy coupled with quick wit allowed for a laugh-out-loud performance.

“If I’m having a terrible day and I know the Backwards Thinkers have a show, I’ll be there,” freshman theatre student Michelle Sheahan said. “It brightens my day up so much.”

Sheahan recently auditioned for a role in The Backwards Thinkers Society. She said improv is an important skill for actors to have because it challenges the person to think of more scenes and characters on the spot.

Economics student Evan Pomish agreed. “It’s amazing how they can just make it up and be funny,” he said.

“It’s kind of a crazy phenomenon. It’s all about knowing each other,” Cain said. “It’s all about feeding off of each other’s ideas. One person thinks of something crazy and you just go with it.”

While practicing improv might sound like an oxymoron, the troupe rehearses twice a week. Caid said It’s essential to break down the barrier between action and thought and simply doing whatever first comes to mind.

“It means a lot to us. It’s something that’s close to our hearts,” Cain said. “Sometimes these people know me better than I know myself.”

Jilek added that pushing each other to the edge of their comfort zones is another essential feature of the extemporaneous group. Whether practicing, performing or casually acting an improv skit in a small dorm room, Jalek said the Backwards Thinkers are a tight-knit family.

Instead of rehearsing specific scenes during practice, Brzezinski said the group practices character development and the skill to anticipate their partner’s next move before considering their own. Each movement is a new, off-the-cuff reaction to the current moment and nothing else.

Catch The Backwards Thinkers’ next performance Oct. 13 at The Cabin. Subsequent shows are Nov. 3 and 17 and Dec. 15 also in The Cabin.