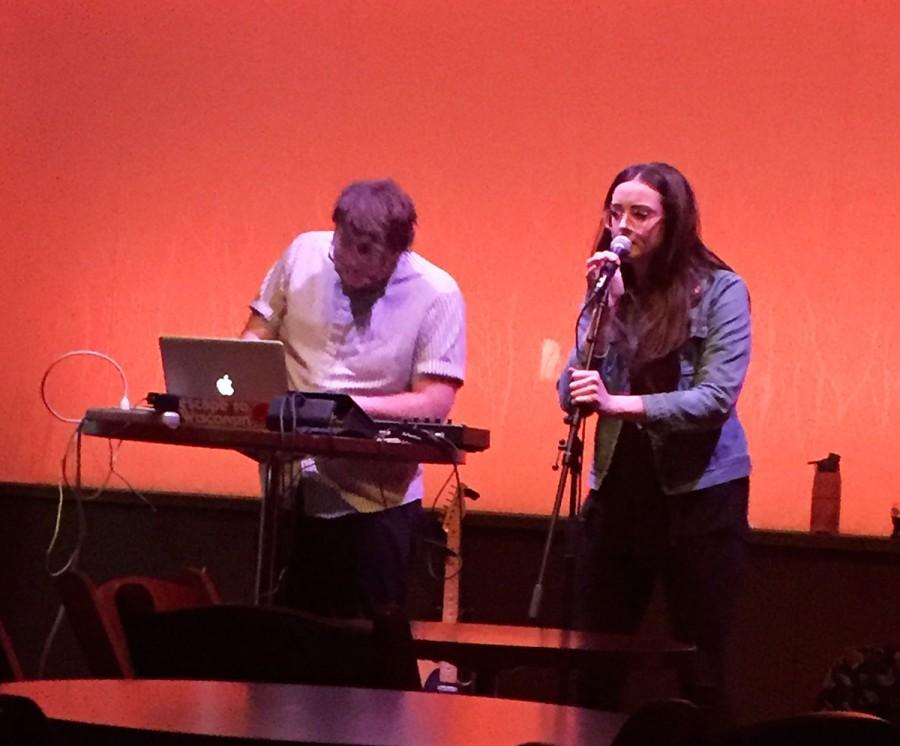 Electronic dream wave: Sniffle Party performed at The Cabin last Friday night, along with various other musical and comedic artists

From uptempo dance music to indie to stand-up comedy, The Cabin saw it all Friday night as local performers and best friends joined together for an all-around unprecedented show.

The show opened with an introduction from James, a nontraditional student at UW-Eau Claire who said that while he doesn’t have definite plans for his comedic future, he is interested in seeing where it takes him.

James described the upcoming performances as “stand-up, and folk music, and then like dance-pop.” He gave a stand-up comedy routine based largely on his life, asking the audience whether life is a tragedy or a comedy.

“It’s both,” James said. “How else could you describe Donald Trump?”

The audience, which filled The Cabin, was supportive, laughing at James’ humor and applauding the musical acts later on.

D. Janakey was the first musical performer of the night, playing a collection of self-written songs on the guitar, and delivering a raw, honest musical experience about his world travels and life experiences.

David Janecke, the man behind D. Janakey, said he is inspired by the likes of musical greats Bob Dylan, Velvet Underground, Nick Drake and Hank Williams.

“I hope they feel like they can connect to something in my music,” Janecke said. “Hopefully they have time to experience it.”

Two Castles performed after Janecke, taking listeners on a musical adventure full of echoey electronic beats. The audience was encouraged to sing along to the more upbeat tunes.

Two Castles performed a collection of songs from their EP titled “Night Talk,” as well as some untitled music.

Two Castles began about a year ago, Christenson said, which is around the same time Sniffle Party was created.

Christenson makes the beats and produces the melodies for Sniffle Party, which is a collaboration with Serena Wagner.

Sniffle Party was the last performance of the night, entering to enthusiastic applause and shouts from the audience.

They performed a mix of covers and original pieces, allowing the audience to hear their full range of musical stylings. Sniffle Party recently released an EP titled “Peach Dreams,” off of which they performed various songs.

Wagner said she is inspired by musicians such as Sylvanesca and Tracy Chapman, and that the band hopes to obtain more female vocalists in the future.

She and Christensen graduated from Eau Claire and both said they enjoyed being back and performing for students.

“It’s a little weird, they don’t really mesh together perfectly,” James said. “We think it’s neat to put on shows every once in awhile where one act to the next are very very different.”

James said they like to expose people to things they don’t know they’ll like, and that the four of them appreciate the many different kinds of art in the Eau Claire community.