A celebration of love, individuality and good music 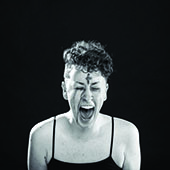 It all started with a day of silence.

The Day of Silence is a student-led national event which calls attention to anti-LGBT name-calling, harassment and bullying. This vow of silence brings awareness to those who feel oppressed because of their sexuality by illustrating the silencing effect of harsh words and actions.

Students on campus, however, decided it was time to break that silence and instead celebrate their sexuality with friends and family.

On April 15, sophomore music student Cullen Propp and the LGBTQIA+ Resource Center organized “Break the Silence: A Concert” which featured students sharing their coming out stories and personal experiences in the form of a variety show, showcasing vocal and instrumental performances, spoken word poetry and visual artwork.

Every performance illustrated a personal story, allowing participants to share their experiences while also celebrating who they are today. Propp said his main reason for organizing the event was to advocate for others by sharing his story.

“All my life I let myself be silenced by the people around me, which made me lose a huge part of myself,” Propp said.  “The past two to three years I have really begun to accept who I am. I want to help other people in our community not go through what I went through. I want people to know they’re not alone.”

Claire Armstrong performed a powerful dance piece that portrayed her experience growing up queer in a religious family.

Hannah Hebl also showcased a dance performance that emphasized the hypersexualization of women in our culture and its negative implication on young girls.

Luc Larson, a first-year music student, decided to share his story while also joining a new community of friends in an original music performance.

Larson said he did not know many people at the beginning of the concert, but by the end he had met friends to whom he felt instantly connected.

“I felt like I was really connected to a group of people,” Larson said, “for the first time in a long time.”

“This experience was really eye-opening, because I know a lot of people have this same stuff that they deal with, but it’s hard when you don’t know for sure. You know in your head you’re not the only one, but at the same time you don’t really know who else is going through the same thing.”

Larson said participating in the event gave him a sense that he was giving back to those who supported him, hopeful that his small act of support will encourage others to speak out against this oppression and express themselves in the loudest way possible.

For anyone who attended the concert, regardless of their sexual orientation, it was an opportunity to be mindful and understand the world through a different lens.

“It is necessary for all people to see other people struggle so that they can gain perspective,” Propp said. “A lot of people don’t actively think about something like gendered pronouns, but a lot of disrespect and confusion comes from misgendering people.”

Break the Silence was a commemoration to those who have chosen to break the silence of oppression. But it’s not just about sexual orientation and identity, it’s about showing respect and kindness to every person you meet. It’s about love.