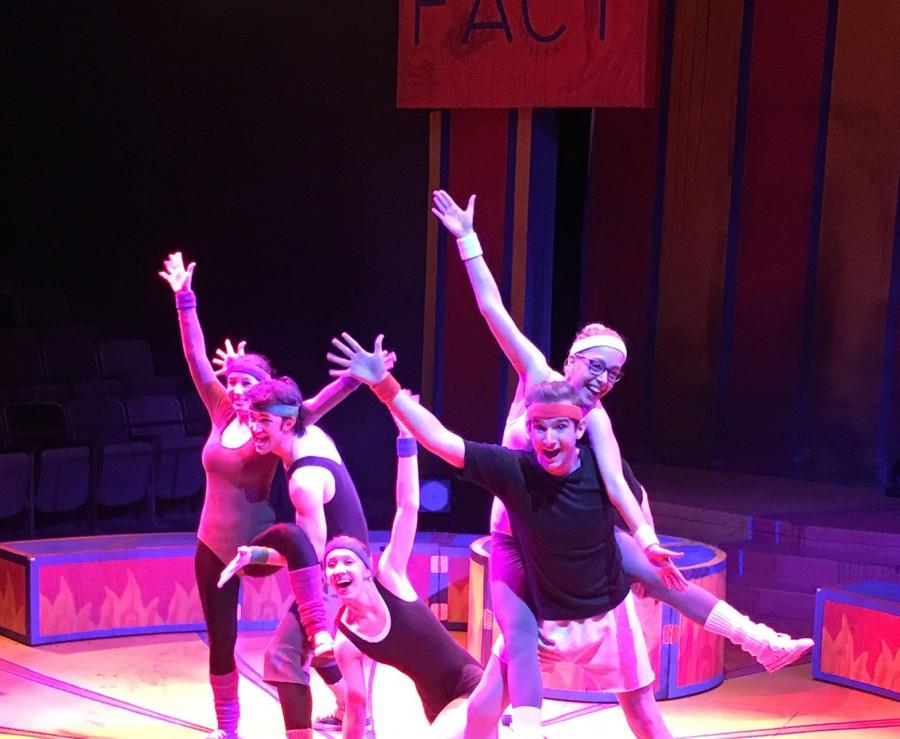 The UW-Eau Claire music and theatre department gave the audience a dazzling show during the opening performance of “Roustabout: The Great Circus Train Wreck!” last weekend.

The vaudeville act propelled the audience on a roller coaster ride of humor, enchantment and at times solace. Who thought tragedy could be so funny? I laughed until my stomach hurt, literally.

Jay Torrence’s play, directed by Arthur Grothe, depicts a series of events which lead to a devastating train wreck on a cool June night in 1918 outside of Hammond, Indiana. Dozens of performers were killed and burned beyond recognition after a military train crashed into the back of a fully-loaded Hagenbeck-Wallace circus train.

Most of the characters were never identified — instead, they were named “Unknown Male 24” or “Unknown Female 32” and buried at Showman’s Rest, without any investigation into the event.

The calamitous premise of the story is juxtaposed by slapstick comedy, drawing attention to the experiences of these performers who were lost to history.

The performance takes on a multitude of angles and illustrates the historical events leading up to the train wreck. The show is historical fiction that embellishes the performers’ lives in an angle that depicts life in the now, in a theatre full of people watching a play.

The various “tracks” of the play allows the performers to speak to a modern audience while telling a story of the past. In this way, the actors write the script of the deceased performers they are portraying, revealing their extraordinary stories along the way.

One of my favorite aspects of the play is the angle depicting “life in the now,” where the script takes on a surprising twist and audience members become an integral part of the play. Performers paraded into the audience, inviting a lucky few to become part of the show for an instance.

I was continuously impressed by every performer as they managed to take on a physically daunting script with only six actors on the set. They truly captured the comedic yet tragic nature of the play.

Dede (Emily Elliott) is a circus performer who wants desperately to be in the side show, but instead twirls a hula hoop, forsaken but determined. Elliott captured the essence of what it feels like to strive to be something she is not, through ambiguous humor and impressive acting.

The Roustabout (Laura Schlichting), a laborer for the circus, runs away from a personal dilemma that she will not disclose. Schlichting highlighted the importance of the train wreck not only for those performers who perished, but to understand the story in a larger context.

Max the Strong Man (Jake Prichard) performs an act of strength with his brothers (Schlichting and Dana Strothenke), but his sensitive personality and love for animals overrides his strong demeanor. Prichard did an excellent job conveying the disheartening task of being someone he is not, only for the show to go on.

Seth K. Hale played a variety of characters, from the Ringleader, to an elephant, to a mythical goddess that sells light yet delicious salad dressing. I was continuously impressed with his ability to shift characters with ease and humor.

Cory McMenomy and Strothenke both did an outstanding job narrating the event and portraying various characters, all the while performing physically demanding skits, singing and dancing. I found myself laughing uncontrollably when McMenomy birthed a baby on stage and when Strothenke played a grumpy clown in a wheelchair, bringing the audience to their feet with laughter.

The entire production was a hoot, captivating audience members of all ages. Perhaps it is best to go into this play in the mindset of a curious child, where the circus is a place where anything can happen.

I highly suggest going to the gut-wrenchingly funny production of “Roustabout: The Great Circus Train Wreck!” showing at 7:30 p.m. Wednesday through Saturday or at 1:30 p.m. Sunday at Riverside Theatre in Haas Fine Arts Center. Tickets are available at the door or through the Service Center in Davis.