Come one come all 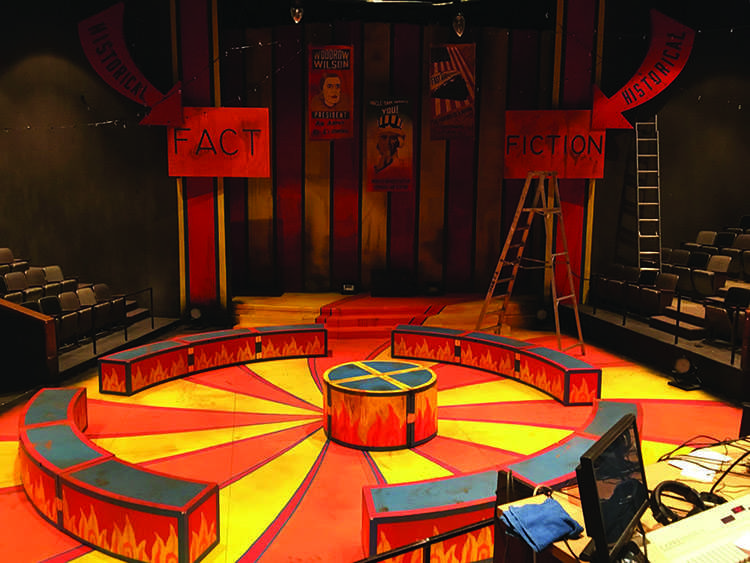 A roar of applause echoes as contagious anticipation and excitement floods the room.

“Ladies and gentlemen, children of all ages, Hagenbeck-Wallace Circus is proud to present the greatest show in the world!”

Children’s eyes blossom with wonder, mesmerized by each new sight: a lion pounces through a flaming hoop, acrobats traipse tightropes from above, as a clown saunters over to encourage your participation in an enthralling yet helter-skelter performance.

A Hagenbeck-Wallace Circus was extraordinary, a surprisingly wonderful event that enchanted every bystander. But it did not end in such renowned fame.

Jay Torrence’s play “Roustabout: The Great Circus Train Wreck!” portrays a series of true events which lead to a devastating train wreck in 1918, killing 86 Hagenbeck-Wallace circus performers. Most were never identified and buried anonymously at Showmen’s Rest, a graveyard near the site of the accident.

A stroke of misfortune that was once lost to history, Torrence pays homage to the performers who lost their lives, resurrecting their humble yet humorous stories along the way.

Arthur Grothe, director of the show and assistant professor of theatre arts, described the performance as a series of “tracks” which takes the audience on a complex, nonlinear journey meant to mimic the chaotic nature of a circus.

“With a circus, anything can go wrong at any time. An elephant could stampede, the tiger could get loose, the trapeze artist could fall,” Grothe said. “That sense of risk for us as performers is always present and the show highlights that risk.”

The nature of risk in this unpredictable entertainment is emphasized in the juxtaposition of character traits and the comedic nature of the play albeit its tragic story.

“The play takes our expectations and turns them on its head,” Grothe said. “If you expect one thing, the play is probably going to go the opposite direction. At every moment, things are going to turn, they’re going to shift gears.”

Actors are challenged with an unusual element of surprise written into the script: incorporating audience members into the performance itself.

If that isn’t enough, only six actors carry out the entire performance, which is packed with intense physical contact, stunt work, dancing and unusual scenery. The six actors play multiple roles, representing the various “tracks” the story personifies.

To complement the avant-garde style of this performance, Barry Inman, junior theatre comprehensive student and costume designer, designed bright costumes which attributes characters with the use of color.

Since only six actors make up the show, Inman had to be creative in designing costumes that denoted who was who while also creating costumes the actors could get in and out of in seconds.

In order to prepare for such an alternative style of theatre that is so physically demanding, the cast got to meet the playwright himself, getting to know Torrence and his personal story behind the historical-fictional plot.

Meeting Torrence was “a great opportunity for students,” Grothe said. “To have that direct source, that direct contact, is extremely invaluable, an experience we don’t often get.”

Although the show personifies a tragic event that has become nearly obsolete in memory, Inman reminds the audience to enjoy the humor of the show and reflect on its message.

“Laugh at the things that are funny,” Inman said. “The theatre is a space for you to cleanse your soul. You can laugh or you can cry. Open yourself up and let loose.”

Tickets are available online through the service center or at the door.