A night with Glassworks Improv in review 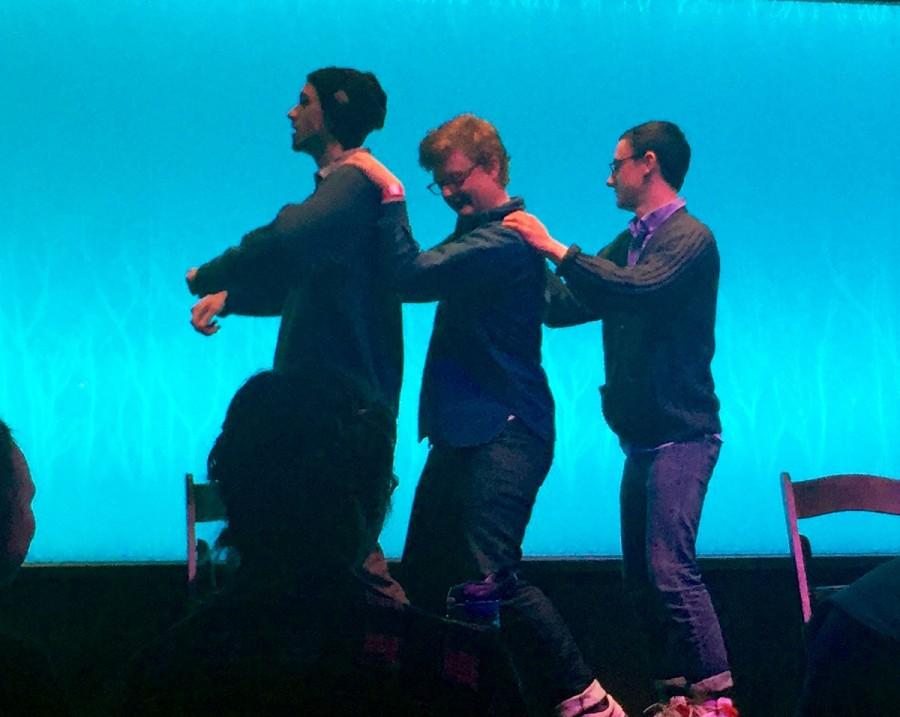 With a one-word suggestion from the audience at the start of the show, Glassworks Improv was off, producing a chuckle-inducing hour-long sketch created entirely on the spot at 8 p.m. Saturday night at The Cabin.

Glassworks Improv’s charge is to focus on honesty, relationships and being “in the moment.”

This, they hope, produces a unique form of comedy, according to their website.

To me, someone who is familiar with (and certainly appreciates) the often outlandish comedy typically found in the realm of improv, Glassworks Improv definitely proved themselves to be unique.

Rather than creating elaborate caricatures that could be seen as obnoxious to many, the group crafted real characters, made interesting by the actors’ awkward, quirky humor.

Since I do appreciate the crazy, sometimes over-the-top humor of improv, I walked into this performance expecting exactly that and during the show found myself hoping Glassworks Improv would do something unexpected.

But nothing they did was particularly bizarre and I think that’s OK. Good, in fact, considering their focuses in their long form.

Although I never found myself feeling like I was about to explode from some absolutely gut-busting laughter, I appreciated how they stayed true to honesty and truth in their comedy.

Something else I appreciated was how random yet connected their long form became.

Their first sketch starting with dogs ended up being more focused on a socially awkward young man who had lived in New York City his entire life, literally never having left the city for even so much as a vacation.

Although the sketch began with this man, played by Raney, interviewing for a job as a dog walker, the routine ended up being more about his journey as a character.

The audience follows him to the airport where he plans on leaving the city for the first time toward the end of the sketch.

He meets numerous other humorous characters played by Hastings and Heinz, who clearly possess highly contrasting yet somehow complementary styles of humor.

Following a short intermission, the trio returned on stage for another sketch, shorter than the last, but equally as charming.

The group again swept the audience away, starting with the audience’s suggestion of “cheerleaders” and ending on a much different note, just as before.

Though this sketch was not nearly as focused on developing interesting characters, it had the more zany quality I had been expecting; the characters, all cheerleaders, finding a horse, riding the horse, accidentally killing the horse, then mourning their loss and later cheerleading at the funeral.

Overall, I was impressed by Glassworks Improv, as well as the different sort of atmosphere they cultivated at The Cabin, which usually features musicians Friday and Saturday nights.

“We were kind of trying to mix it up from the usual chill vibes of The Cabin,” Thoen said.

And that they did. From the performance I was able to see The Cabin in a new light.

The only flaw in the evening was whenever someone ordered any sort of coffee drink, the deafening sounds of what sounded like machinery made it difficult to hear the actors who were not given microphones for the performance.

Although I prefer the relaxed, acoustic atmosphere featured artists typically provide at the venue, I did enjoy the experience and was grateful to have witnessed the truly unique and subtle humor Glassworks Improv provided.
I just hope no one orders coffee next time (just kidding).