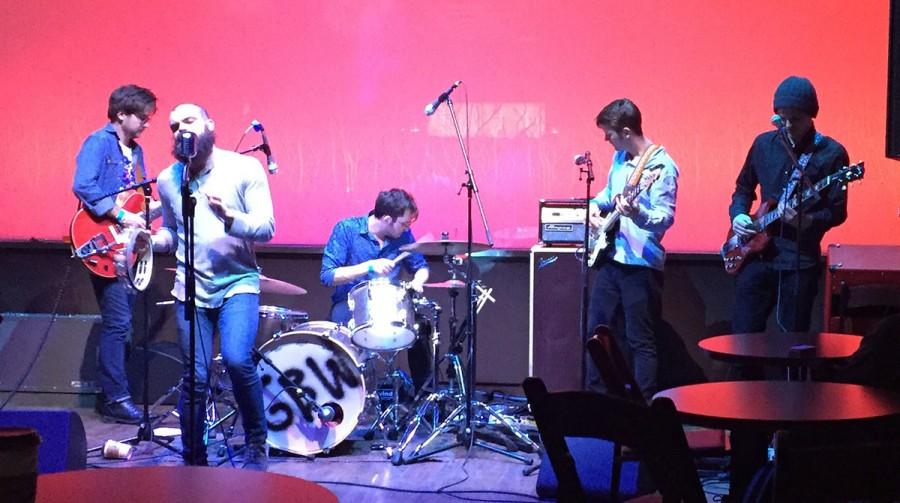 General B and the Wiz performed for a packed crowd on Saturday night.

The Minneapolis-based band General B and the Wiz played a rousing two-hour set at The Cabin on Friday and Saturday night, showcasing their self-described “indie-blues-psych-rock” style.

Both levels of The Cabin were full of enthusiastic audience members as the band delivered a thundering variety of covers and songs from their three albums.

The band, which consists of vocalist and tambourine player Quincy Voris, guitarist Seth Duin, guitarist Kai Brewster, drummer Kyle Holder and bassist Kevin Coughenour, delivered an enthusiastic, varied performance to a large crowd on Saturday night, banging on their “brand new cowbell” and breaking both a drumstick and a tambourine by the end of the night.

Their self-written works varied in subject matter from love to drinking and heartbreak. Voris sung them soulfully, with occasional backup from other band members.

The band asked the audience to join in for several songs, as Voris danced among the crowd, shaking his tambourine and encouraging members of the crowd to sing into his mic. The band covered Three Dog Night and Ray Charles, among other artists, and performed a selection of original songs.

“It was a really friendly vibe,” audience member Rachel Clepper said. “It was fun to see them dancing around and having fun.”
Nearing 9 p.m on Saturday the coffee shop was filled as people continued to trickle in, many were forced to stand in the back and watch.

As for the band itself, Brewster said he and the other band members are used to a much rowdier, drunken crowd. Brewster said they agree that they most enjoy playing for a familiar “raucous” audience at Ed’s No Name Bar in Winona, Minnesota, but any crowd is a good crowd.

“It was pretty new for us to have people sit and listen,” band member Kai Brewster said. “It was great; a real treat.”
One of their long-term goals as a band includes recording and releasing their fourth album, which they are currently in the process of doing, Brewster said. They are unsure what their plans are after that.

“I think our pipe dream is to make this our full time gig,” Holder said. “We’d like to tour, and do music, and just do that for a living.”

All the band members have full-time jobs outside of the music industry. There are multiple teachers, a pastor and a cook, Holder said.

The band’s musical inspiration is wide and varied, with many genres and artists influencing their style. Their musical style is a “fill in the blank,” Brewster said.

“Two of us studied classical music in college, and we listened to country music and EDM on the way down here, if that gives you an idea,” Holder said. “I listen to a lot of hip-hop, which doesn’t come through in our music at all.”

The band is “fluid” musically, but their passion comes through in their powerful lyrics and rowdy attitude. They’re not afraid to get into their performance, even going so far as to bang a cymbal with a tambourine repeatedly.

“We’re pretty fluid as a band, so we don’t really like to limit ourselves to a specific genre,” Brewster said. “We’re rock and roll, but we’re not the Foo Fighters.”

General B and the Wiz’s music is available on Bandcamp, Spotify and iTunes.