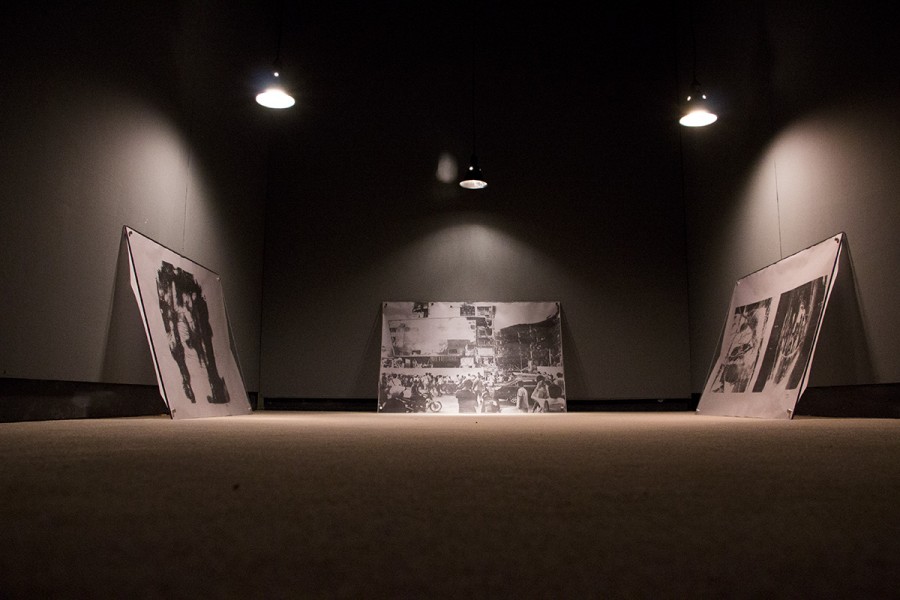 Foster Gallery’s exhibit “Color, Sign and Faith,” features the works of four Thai artists across several mediums and is on display until March 17.

A new exhibit titled “Color, Sign and Faith” is showcasing the various art of Thai artists who gain influence from the beliefs of ancient Thai culture and Buddhism.

The gallery showcases the self-expression of each artist through the abstracts of different colors they used within their work. The artists include Pichai Thurongkinanon, Surachai Eakpalakorn, Surat Tomornsak and Chalitaporn Yamoon.

The use of color has been part of Thai culture since ancient times; the complexity in which colors are used symbolically express the artist’s faith and beliefs, transforming colors into a form of visual language, according to a pamphlet at the gallery.

This symbolic use of color created new identities for the colors, which reflected the artist’s point of view and how he or she approached spiritual practice and beliefs in the past, according to the pamphlet.

Senior lecturer of English Sean Ford said he enjoyed the cultural experience the gallery provided. Ford said his wife is from Thailand and knows one of the artists personally.

The gallery exposes those who may only be familiar with western art, to art from across the world, Ford said.

“It’s very different from western art, but it really draws you in and makes you want to look at it more in part because of the differences,” Ford said. “If you’re familiar with western art, you’re not really sure what you’re seeing but they still look good so it makes you want to hang around and figure it out.”

Ford said he thought the idea behind Thurongkinanon’s mural painting was interesting. The artist, Ford said, spent many hours in a room (featured in the painting) in Bangkok because he fell in love with the colors.

“I’m not an artist, but I thought it was amazing that he duplicated as perfectly as he can the actual color,” Ford said. “These reds, and golds and greens are the same colors that are found in that room, which is a very important room for Thai people in Bangkok.”

Ford said knowing the history of the paintings sheds a different light on them; they seem expressive in different ways.

Not only are visitors able to enjoy the thought-provoking artworks, they are also able to relax. Set to the soothing sounds of Thai music, first year student Elizabeth Bauman said she felt a peaceful environment while walking through the gallery.

First-year students Bauman, Chesney Thompson and Shaina Fike said said visiting the exhibit cleared their minds and put them at ease, while still proving to be thought provoking.

“It’s cool to see and think about what the artist was thinking about at the time when they were painting,” Bauman said.

Shaina Hendrickson, a junior art education student, agreed and said the background melody helps set the frame of mind for the visitors.

“My overall feel for the environment/atmosphere here…is that it’s more peaceful,” Hendrickson said. “The noise in the background affects the mood…it’s like white noise.”

These paintings, prints and mixed media by Thai artists will be in the Foster Gallery Monday through Friday 10 a.m. to 4:30 p.m., Saturdays and Sundays 1 to 4:30 p.m., and Thursday evenings from 6 to 8 p.m.