The Midwestern landscape represented through paint and photograph 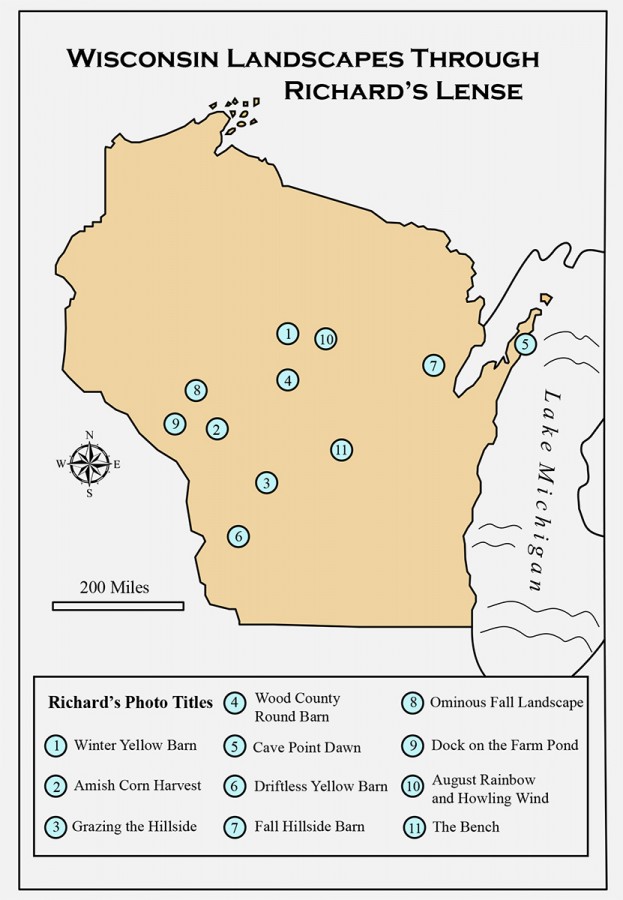 Sites of Richard Wunsch’s photographs from The Midwestern Landscape exhibit according to the GPS coordinates his camera recorded.

Growing up in the Midwest, I’ve learned to give attention to the local landscapes and appreciate how quickly they can evolve.

Back home in south central Minnesota I often visit a state park called Minneopa, which translates from the Dakota language as “water falling twice.” I usually begin the trip at the north end of the park, hiking among the various grasses and boulders of the flat prairie ecosystem.

I follow this with a trek up a couple county roads leading to the sudden emergence of two stacked waterfalls falling from the Minnesota Creek and an abundance of woodland framing the sandstone walls.

This can all be observed within a mile’s walk.

For photographer Richard Wunsch, his desire to capture the landscapes of Wisconsin takes him all over the state.
Through March 4, an exhibit titled “The Midwestern Landscape” at the Janet Carson Gallery is displaying a dozen of Wunsch’s photographs along with the abstract paintings of landscape by Beki Borman of Milwaukee.

Director of visual arts at Eau Claire Regional Arts, Rose Dolan-Neill said the artists’ work was chosen by the Visual Arts Committee because of their similar themes.

“The community is enthused about the theme,” Dolan-Neill said. “It’s always nice to see images that are familiar to you.”

Wunsch has lived in Wisconsin his entire life, with the majority of his time spent in Wausau and a few years in Milwaukee while at school for graphic design, he said. His favorite Wisconsin landscape is the scenic hills and valleys of the Driftless Area, Wunsch said. Black River Falls and Vernon County are personal favorite places to photograph the river valleys, he said.

“Depending on where I want to go I will get up before sunrise to be wherever I want to be by sunrise,” Wunsch said. “And then I’ll just drive around until the light isn’t appropriate anymore.”

Not only is Wunsch capturing landscape, he’s seeking a dramatic morning light or fog on the horizon to add to the scene, he said. Many of his photos represent rural settings because it’s all around, Wunsch said. He’s also looking to capture architecture’s place in the landscape, Wunsch said, especially old round barns which are declining fast.

“If you notice all the landscapes I have don’t really have any modern buildings,” Wunsch said “… I’m trying to shoot things that kind of recall farming from the past.”

Anders said the two artist’s complemented each other; they both shared their interpretations of the land, but Wunsch’s photographs expressed concept and Borman’s paintings expressed color.

Borman’s eight paintings portray the close relationships between color, shape and landscape, with hazy distinctions between land and sky in her pieces.

“I enjoyed her color,” Anders said. “The way she balanced color, the way she derived it from her observations of nature.”

Barb said she loved the soft qualities in all of Wunsch’s photographs explaining how linear areas of grass emerge from the fog in his work. She liked seeing the different approaches the two artists took in representing landscapes and how it reveals what’s personal to them.

“That’s what art is about,” Barb said. “Two different people interpreting the world around us in distinctly different ways.”